Explaining the U-Shaped Pattern of Farm Size and Productivity 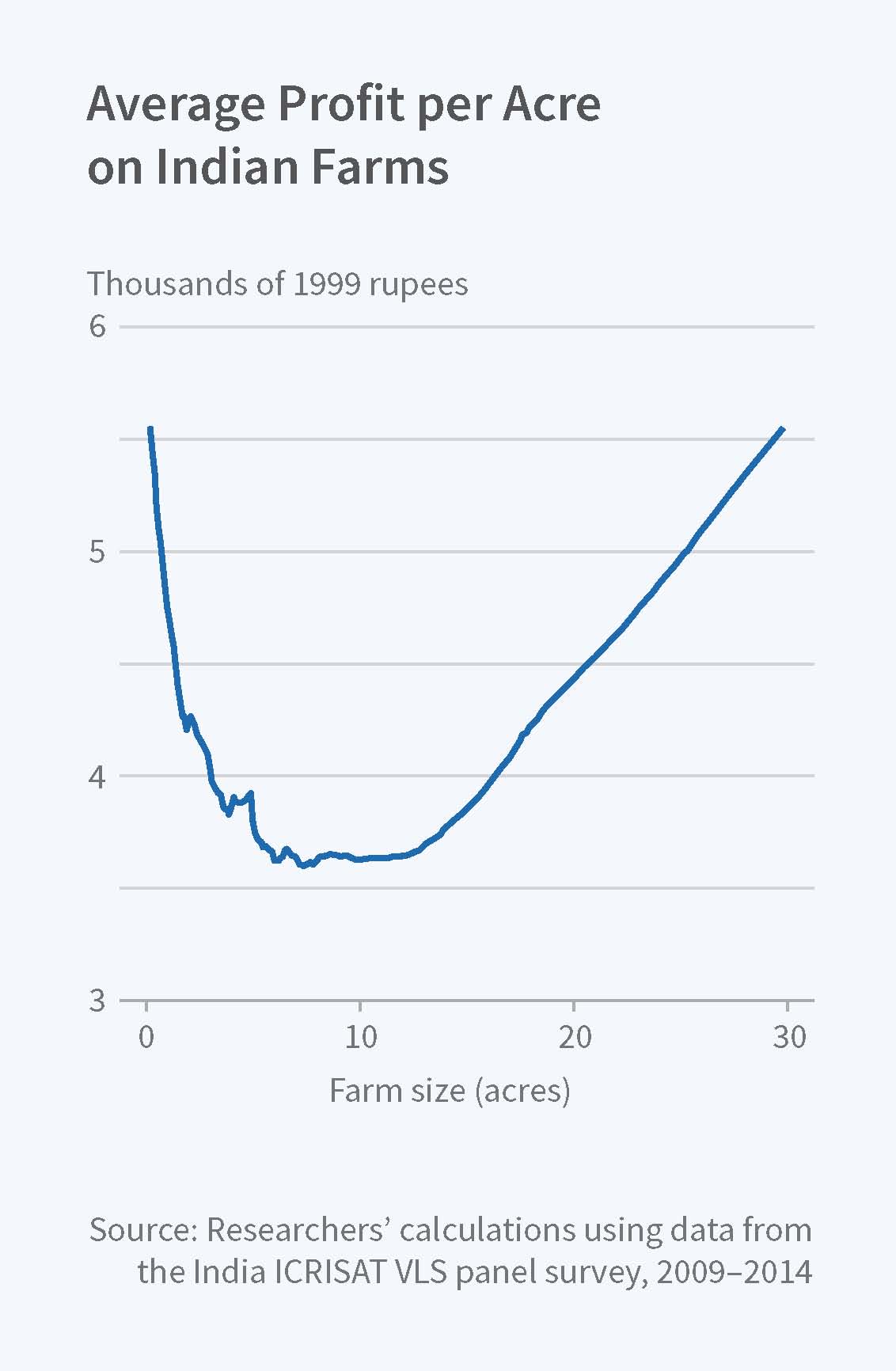 Andrew D. Foster and Mark R. Rosenzweig explore these productivity patterns in Are There Too Many Farms in the World? Labor-Market Transaction Costs, Machine Capacities, and Optimal Farm Size (NBER Working Paper No. 23909). They find that fixed transaction costs, in the form of wages paid to laborers, and economies of scale in the use of machinery can explain the observed relationships between productivity and farm size.

The researchers analyze village level survey data on farms in India from the International Crops Research Institute for the Semi-Arid Tropics, which feature a relatively balanced distribution of both small and large farms compared with what actually exists in India and most other low-income countries. Forty percent of the sample is comprised of landowners who own more than 10 acres, a rarity among farmers in India. They find a U-shaped distribution of farm yield and productivity: both large and small farms are more productive than medium-size ones.

About one-third of farm laborers in the sample work for less than eight hours per day. The researchers find that low-hour workers are paid 33 percent more than laborers who work eight hours a day, suggesting a fixed cost of daily labor. One explanation for this fixed cost is that workers are often hired on a daily basis, as farming can be dependent on the season and tasks cannot necessarily be accumulated until there is sufficient work for many days. There are also significant travel costs associated with hiring workers, as many live outside of the village in which they work.

Small-plot farmers usually employ family members, only hiring the more expensive low-hour workers when family labor potential is exhausted. Intermediate-size farms, therefore, are the most likely to employ low-hour workers. This explains why small farms are more productive than medium-size ones; they are less likely to employ expensive non-family labor. This phenomenon does not, however, explain the second part of the U-shaped distribution: the discovery that above some threshold, large farms are more productive than even the most productive small ones.

To understand this aspect, the researchers examine data on power sprayers used for spreading herbicide. They find that, consistent with economies of scale, average hours of per-acre sprayer use decline for farms larger than 12 acres. Owners of large farms use pricier, higher-capacity equipment and are able to spend less time spraying and weeding per acre for the same effect than owners of small farms. The findings are robust to controlling for differences in farmer wealth and multiple measures of plot quality; they also hold across plots for the same farmer, thus ruling out farmer ability differences as a major determinant of the U-shape.

The researchers calculate that equipment-related productivity in India does not rise once farms are larger than about 25 acres. Efficient production above this ceiling would require higher-capacity machinery, like that used in the United States and Brazil. Such machinery is currently unavailable in India because of the paucity of very large farms. Furthermore, owners of small farms have little incentive to expand to large farms. Moving to a productive large-farm scenario would require a landowner to buy many small plots simultaneously to avoid the productivity loss associated with intermediate-size farms.

Are There Too Many Farms in the World? Labor-Market Transaction Costs, Machine Capacities and Optimal Farm Size