Explaining the Growth of the Alternative Workforce 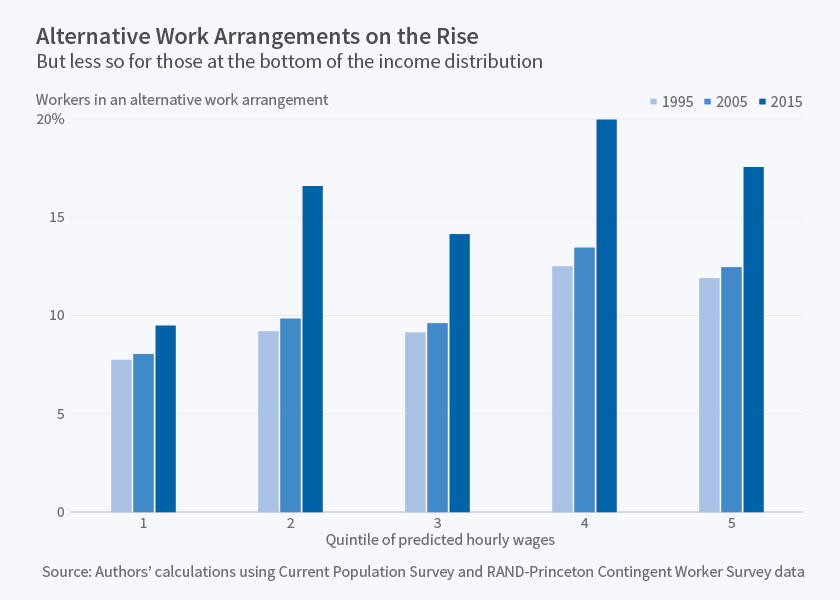 Contract workers more than doubled, to 3.1 percent of the workforce, in the decade ending in 2015, while independent contractors rose 1.5 percent.

The alternative workforce — temp, on-call, and contract workers, freelancers, and independent contractors — has been growing rapidly, but not primarily from Uber, Task Rabbit, and other firms in the so-called "gig" economy, according to research presented in The Rise and Nature of Alternative Work Arrangements in the United States, 1995-2015 (NBER Working Paper 22667). Independent contractors are the largest group in the nontraditional or "alt" workforce, and contract workers, employed by contract firms, are the fastest-growing segment.

The alternative workforce, which represented 10.7 percent of the employee base in 2005, had grown to 15.8 percent by 2015, Lawrence F. Katz and Alan B. Krueger report. They find that contract workers' share of the total workforce more than doubled, from 1.4 percent to 3.1 percent. By comparison, workers in the widely discussed online "gig" economy accounted for just 0.5 percent of the workforce in 2015.

"The online gig workforce is relatively small compared to other forms of alternative work arrangements, although it is growing very rapidly," the researchers write. "About twice as many workers selling goods or services directly to customers reported finding customers through offline intermediaries than through online intermediaries."

The researchers administered an online questionnaire to 3,850 people in late 2015 as part of the RAND American Life Panel. The survey was similar to the Bureau of Labor Statistics' Contingent Work Survey, which was last conducted in 2005. The researchers compared the results of their survey with those of the analogous 2005 BLS survey; because the sample sizes are small, they warn that their results on changing employment patterns are suggestive rather than conclusive. The study indicates that 94 percent of net employment growth in the U.S. economy from 2005 to 2015 occurred in alternative work arrangements.

Although the workforce share of self-employed workers has declined over the last two decades according to standard measures from the Current Population Survey, the researchers point to Internal Revenue Service data in which a rising share of taxpayers indicate self-employment income as seen in Schedule C and 1099-MISC filings over the same period. And their comparison of the 2015 RAND survey and 2005 Contingent Work Survey indicates that the share of workers who are independent contractors, consultants, or free-lancers climbed from 6.9 percent in 2005 to 8.4 percent in 2015.

Higher-wage workers are more likely to work as independent contractors than their lower-wage counterparts. Over the last decade, the types of jobs that were contracted out through contract companies spread up the occupation distribution. Independent contractors and freelancers make more money per hour than traditional employees, while on-call and temp workers make less than their traditional counterparts. But all groups of workers in alternative work arrangements earn less per week than similar traditional workers because they work fewer hours, the researchers find.

Job satisfaction also varies within the alternative employment workforce. While most temp workers would prefer to have a permanent job and almost half of on-call workers want employment with regular hours, more than 80 percent of freelancers and independent contractors reported that they prefer their situation to working for someone else.

The Rise and Nature of Alternative Work Arrangements in the United States, 1995-2015