Did Credit Expansion Spur Consumer Spending in the Great Recession? 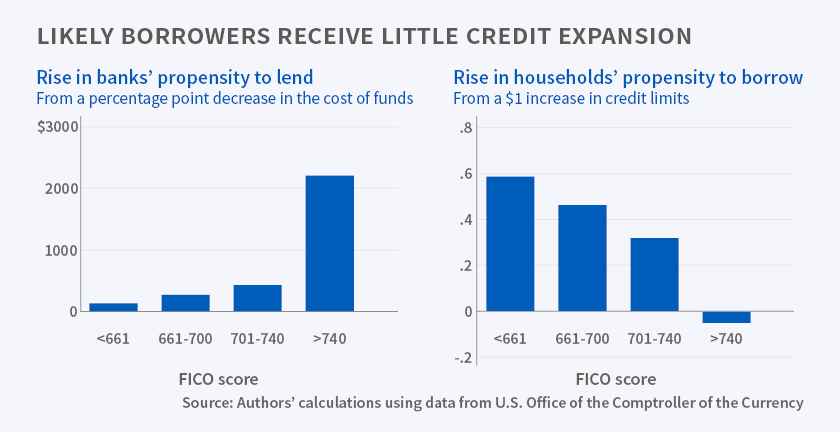 Banks passed through credit expansions not to the consumers most likely to increase spending, but to those whose spending was less responsive to changes in credit limits.

Interest rates on consumer loans, including credit cards, rose during the Great Recession as banks became more cautious in their lending. This led to reduced consumer spending. The Federal Reserve attempted to offset this development by providing banks with access to financing at relatively low interest rates in the hope that the banks would make credit more available to consumers and thereby spur consumption.

Sumit Agarwal, Souphala Chomsisengphet, Neale Mahoney, and Johannes Stroebel examine the impact of this policy. In Do Banks Pass Through Credit Expansions? The Marginal Profitability of Consumer Lending During the Great Recession (NBER Working Paper 21567), they find that banks disproportionately passed through credit expansions to consumers whose spending was relatively unresponsive to changes in credit limits, rather than to those who were most likely to increase spending. The findings are based on analysis of spending patterns on all credit cards issued by the eight largest U.S. banks from 2008 to 2014.

They find that households with the lowest FICO scores, which also typically have the lowest amount of available credit, are the most responsive to increases in credit limits. A $100 increase is estimated to cause an additional $58 in borrowing for these households. This effect is driven by increased spending, rather than simply shifting borrowing across credit cards. In contrast, households with the highest FICO scores, which typically enjoy the highest credit limits, are much less responsive to changes in their credit limits. A $100 increase for this group is estimated to cause only an additional $23 in borrowing. Moreover, this effect is driven by shifting across credit cards rather than by increased total spending.

Do Banks Pass Through Credit Expansions to Consumers Who Want to Borrow?