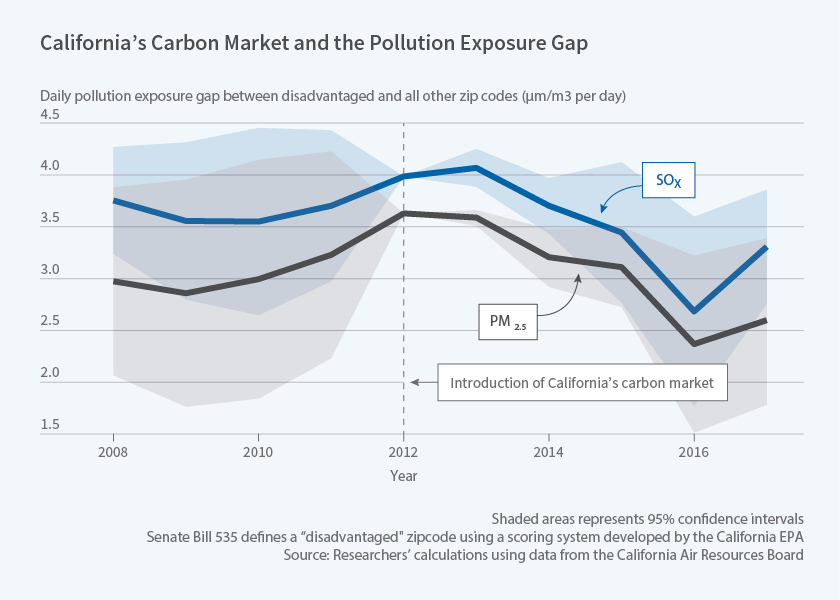 The gap in pollution exposure between disadvantaged and other communities narrowed by 21 percent for nitrogen dioxide, 24 percent for sulfur dioxide, and 30 percent for particulates following introduction of cap and trade.

California's greenhouse gas cap-and-trade program has narrowed the disparity in local air pollution exposure between disadvantaged and other communities. That is the finding of Do Environmental Markets Cause Environmental Injustice? Evidence from California's Carbon Market (NBER Working Paper 27205), a study by Danae Hernandez-Cortes and Kyle C. Meng. The results do not support concerns, raised prior to the policy's enactment, that the market forces introduced by the program could worsen an existing pattern in which disadvantaged neighborhoods are more exposed to pollution than their better-off counterparts.

California's law caps total annual emissions of greenhouse gases. The initial cap, which was set to decline each year, aimed to reduce statewide greenhouse-gas emissions to 1990 levels by the year 2020. That goal was achieved by 2016, leading California to set a 2030 target at 60 percent of the 1990 levels.

The program regulates most major stationary greenhouse gas-emitting sources, including utilities and industries. By creating a market in tradeable emission rights, it puts a price on greenhouse gas emissions and thereby encourages emitters to invest in abatement measures. When a polluter's marginal cost of reducing emissions is relatively steep, it may find it cheaper to buy emission permits or carbon offsets than to lower emissions. By leveraging market forces to shift emission cuts from high to low abatement cost polluters, cap-and-trade can be more cost-effective than imposing uniform regulations on diverse industries. However, these same market forces also alter where pollution is generated, and thus who may be harmed by it, in ways that can either exacerbate or lessen existing inequities in pollution exposure.

The study analyzes emissions from some 300 facilities over the 2008–17 period to determine how the greenhouse gas limitations affected exposure to emissions of local air pollutants across disadvantaged and other communities in California. The researchers embed an atmospheric transport model into their program evaluation framework to track the dispersal of pollutants, accounting for geography, wind patterns, (insert comma) and smokestack height. They find that between 2012, the year before the program took effect, and 2017, the disparity in pollution exposure between disadvantaged and other communities, which the researchers label the environmental justice gap, narrowed. The gap in concentrations of nitrogen dioxide declined by 21 percent. The decline was 24 percent for sulfur dioxide and 30 percent for particulate matter. These declines reversed a trend of widening disparity prior to the program's onset.

California's cap-and-trade program is the second largest carbon market in the world — after that of the European Union — as measured by the total value of permits. However, as the researchers caution, the California findings may not necessarily generalize to other environmental markets. In settings where disadvantaged communities are downwind from polluters with high costs of cutting emissions, an environmental market could widen the environmental justice gap.