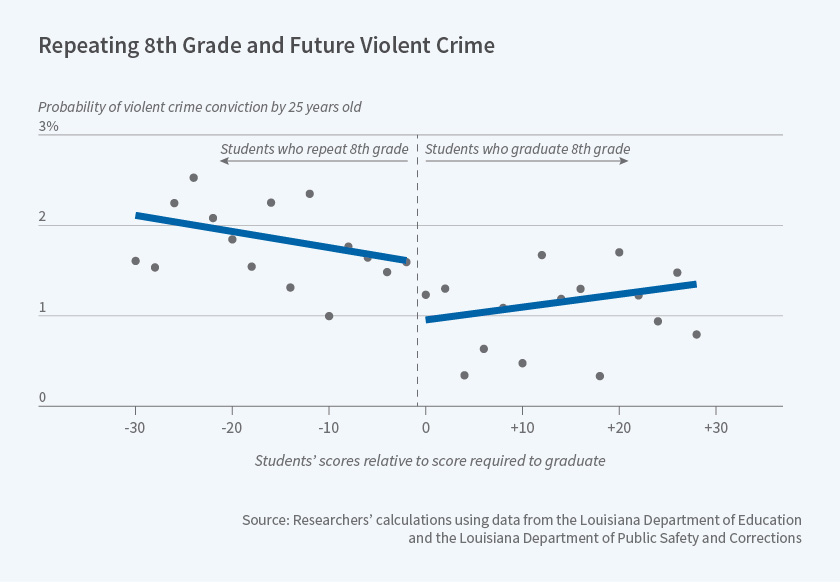 In Louisiana, students denied promotion because of low English and math test scores were more likely to be convicted of violent crimes by the time they reached 25.

Education policies affect the academic and social skills of young adults, thereby influencing not only their earning potential but also their civic engagement, health behaviors, and criminal activity later in life. Measuring the impact of specific policies is challenging. In The Effect of Grade Retention on Adult Crime: Evidence from a Test-based Promotion Policy (NBER Working Paper 25384), Ozkan Eren, Michael F. Lovenheim, and Naci H. Mocan find that a Louisiana policy of retaining students in eighth grade based on their sub-standard test scores in English and math increases the likelihood of their being convicted of a crime by age 25. The researchers find a 58 percent increase, in particular, of the likelihood of being convicted of a violent crime.

While previous research has explored the relationship between years of schooling and crime, there is less evidence on how specific education policies affect the long-run likelihood of criminal activity. This study focuses on a 1998 Louisiana education reform measure that calls for keeping students back in eighth grade if they fail to reach certain test score levels in English and math. Louisiana was a pioneer in this grade-retention "accountability" policy. Sixteen states, as well as many large school districts across the country, now have end-of-year exams that help determine whether students are promoted to the next grade level.

The researchers obtained education data on all public K-12 students from the Louisiana Department of Education and criminal data from the Louisiana Department of Public Safety and Corrections. They focused on eighth graders in the academic years of 1998–99 through 2000–01, specifically on students who failed initial mandatory tests required for promotion to ninth grade. Their dataset consists of 22,929 unique student observations.

The researchers largely attribute the long-run effects of retention on crime to a combination of declines in high-school peer quality and lowered non-cognitive skill acquisition. They also find that retention in eighth grade increased the percentage of school days missed three years later by almost 2 percentage points, and that it increased the likelihood of dropping out of high school by about 7.2 percentage points.

The Effect of Grade Retention on Adult Crime: Evidence from a Test-Based Promotion Policy