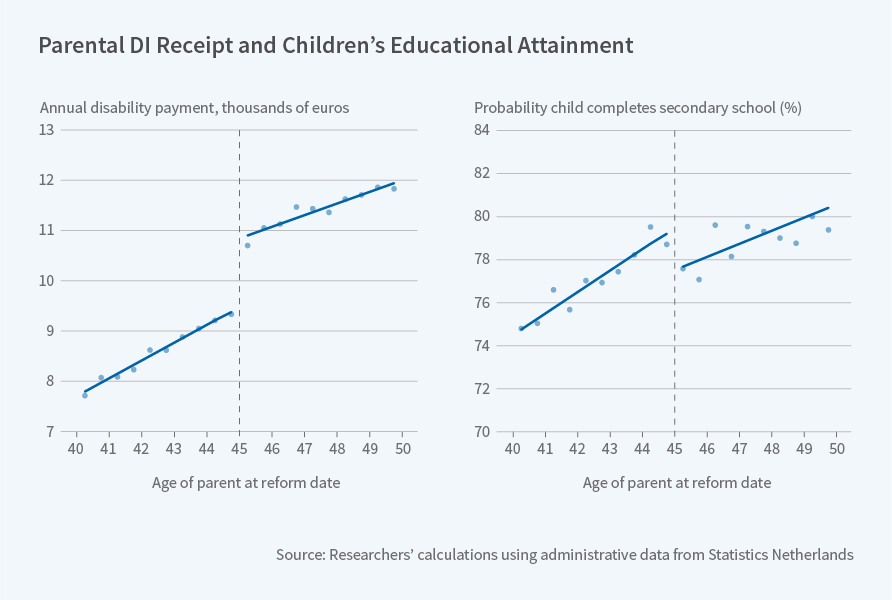 Every €1,000 decline in disability benefits to parents translated into a boost of around €5,700 in children's future earnings.

In 1969, two years after the introduction of disability insurance in the Netherlands, 4 percent of the Dutch working age population was receiving benefits. By the late 1980s, that had risen to 12 percent. Prompted by rising costs, the Dutch took a series of steps to reduce benefits, stiffen eligibility requirements, and transfer responsibility to individual employers. In Intergenerational Spillovers in Disability Insurance (NBER Working Paper No. 24296), Gordon Dahl and Anne Gielen exploit the 1993 disability insurance changes to explore how a parent's loss of some or all disability insurance benefits affected their children's future choices and outcomes. They study the children's future claims for disability benefits and other social assistance programs, their labor market outcomes as adults, and their human capital investments.

Individuals in the Netherlands receive disability insurance based on the income lost from their disability. One 1993 change affected the calculation of a potential beneficiary's "earnings capacity," resulting in fewer individuals qualifying for insurance and lower benefits for those who did. The changes affected some individuals but not others. On November 12, 1996, the Dutch parliament passed a motion grandfathering anyone between the ages of 45 and 50 into the old, more generous rules for claiming disability insurance benefits, before the re-examinations for that age group took place. This grandfathering created a cutoff in the generosity of disability insurance based on a person's age that the research exploits to examine how disability income receipt affects children.

Parental disability income receipt also affects their children's future earnings and taxes paid. Every €1,000 euro decline in disability benefits to parents translated into a boost of around €5,700 in their children's future earnings. Tax payments by these children between 1999 and 2014 rose by roughly €2,000 — 2 percent of the mean taxes paid. "The combination of reduced government transfers and increased tax revenue results in a fiscal gain of €5,900 per treated parent due to child spillovers by 2014," the researchers report.