Winners and Losers from the H-1B Visa Program 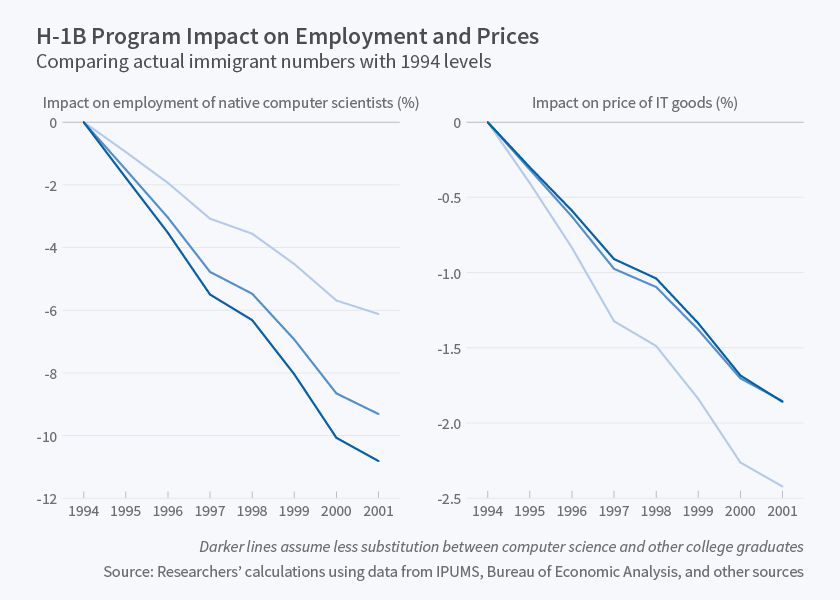 The influx of foreign computer scientists enabled by the program lowered wages of domestic workers in the field, stimulated growth in related fields, and reduced consumer prices.

Who are the winners and losers in the special visa program that enables U.S. companies to employ high-skilled foreign workers on a temporary basis in specialized occupations? In Understanding the Economic Impact of the H-1B Program on the U.S. (NBER Working Paper 23153), John Bound, Gaurav Khanna, and Nicolas Morales explore how the availability of such workers has affected the welfare of domestic workers, firms, and consumers.

Based on their model, the researchers calculate that the influx of foreign-born computer scientists enabled by the H-1B program had a positive effect on the U.S. IT sector, and consequently the U.S. economy, but had significant distributional effects. They estimate that absent the influx of foreigners, U.S. computer scientists would have earned between 2.6 and 5.1 percent more in 2001. Moreover, some U.S. workers switched to other occupations, lowering the number of domestic computer scientists by between 6 and 11 percent. The picture is brighter in other respects: Foreign scientists were found to be strong contributors to innovation and productivity. That translated into wage and job gains in related fields, and into more choice and lower prices for consumers.

The research focuses on the Internet boom years, when workers in computer-related occupations became the largest share of H-1B visa holders. The cap on visas was initially 65,000 a year. That became a binding constraint in the mid-1990s and it was raised to 115,000 in 1999. The U.S. Department of Commerce estimates that during the late 1990s, 28 percent of all U.S. programming jobs were held by H-1B visa holders.

Although the H-1B legislation stipulates that visa holders must be paid the prevailing wages for their jobs, critics of the H-1B program argue that visa holders have little bargaining power because they can work only for the companies that sponsor them. "It seems reasonable to assume that employers must expect some cost or productivity advantage when hiring foreigners, however modest," the researchers note. "If not, why would they incur the associated effort and expense?"

The researchers calculate that wages, domestic employment, and, as a result, college enrollment in computer science would have grown even more rapidly than it did, had immigration been restricted. Indeed, the fraction of U.S. college degrees in computer science would have been higher by 1.3 to 2.6 percentage points in 2001. The reduction in labor costs associated with this program spurred growth and innovation in the computer science sector and increased productivity in the economy as a whole. Lower labor costs also increased profits, enabling new companies to enter the field. Growth in the computer science sector also sparked expansion in related fields, raising wages for college graduates who were not computer scientists and for non-college graduates.

For consumers, the researchers estimate, the H-1B program has resulted in lower prices for technology-related products, and has led to a higher rate of product innovation. The innovation effects are particularly important in assessing consumer welfare.

The researchers emphasize that while their estimates are dependent on the assumptions built into the model, the impacts on computer scientists would hold so long as the demand curve for such workers is downward sloping and the domestic supply curve is positively sloped.

Understanding the Economic Impact of the H-1B Program on the U.S.