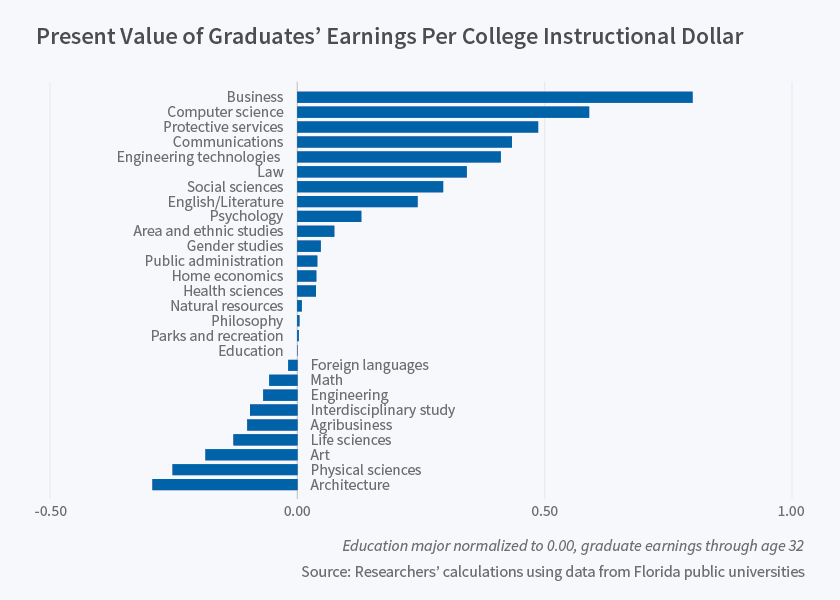 Future earnings differ substantially across college majors, but so do instructional costs. They don't always line up.

Are policies designed to encourage students to enroll in the most remunerative professions a cost-effective use of private and public educational dollars? How would tuition vary if it were tied to the instructional costs of each degree program? These are among the questions raised by Joseph G. Altonji and Seth D. Zimmerman in The Costs of and Net Returns to College Major (NBER Working Paper 23029).

The researchers point out that policies designed to encourage students to seek degrees in lucrative STEM fields, as opposed to the less-remunerative liberal arts, consider only one side of the educational ledger. Engineers earn 30 percent more than teachers, but cost universities 44 percent more to produce. Differences in earnings net of costs on a per-graduate basis are still driven primarily by earnings. But costs matter a lot when net returns are measured per dollar of instructional spending. The return per dollar of instructional spending may be little different when training electrical engineers and history teachers. Though per-graduate returns are of interest to a social planner trying to assign students to majors, per-dollar returns are relevant for universities facing fixed budgets.

The researchers focus on what universities spend to educate students. This is different from the cost to the students, whose tuition may not cover full costs, and who also may receive outside grants. They also point out that their measure of future earnings is a necessarily incomplete measure of the return to an education, since it excludes any nonmonetary benefits to both the student and society, which may differ by major.

The study relies on budget data for the years 2000 to 2014 at the 12 universities in the Florida state system that offer degrees at the bachelor's level or higher. It focuses on the cost of educating the nearly 58,000 students who enrolled in a university directly out of high school and went on to graduate. Earnings data is limited to students who work in Florida after graduation — 75 percent of the sample. These earners were tracked through early 2010; thus, the oldest workers in the earnings records were 14 years out of high school, or around age 32.

The researchers calculate the average total degree cost to be $39,184, but they also find large disparities across fields. On average, educating engineering students costs $62,297, double the cost of business students. The cost of educating students in a particular major is not related to future student earnings. Indeed, some of the students who were cheapest to educate — such as business and computer science majors — displayed the highest future earnings.

The researchers ask whether budget-constrained universities could become more productive by more efficiently allocating their resources. They note that if a university is allocating its spending efficiently, a marginal dollar of additional spending would have the same return, in terms of society's objectives, in all fields. This return is difficult to calculate, and includes more than earnings. They note that "[I]f schools are currently allocating funding optimally across majors, it must be the case that degrees in fields with low per-dollar returns such as art, architecture, and even engineering and the physical sciences...offer larger non-pecuniary and public benefits than programs in fields like computer science, business, or law." If this is not the case, universities could raise welfare by reallocating tuition subsidies towards fields with higher social returns.

Over the study period, a combination of budget cutbacks and a surge in enrollment resulted in disproportionate declines in per-credit spending in some disciplines. The researchers estimate a drop of as much as 40 percent for engineering and health. The large changes raise the question of whether drops in per-credit spending make students less inclined to pursue resource-strapped fields, and lower the value of a degree in the labor market.

The Costs of and Net Returns to College Major