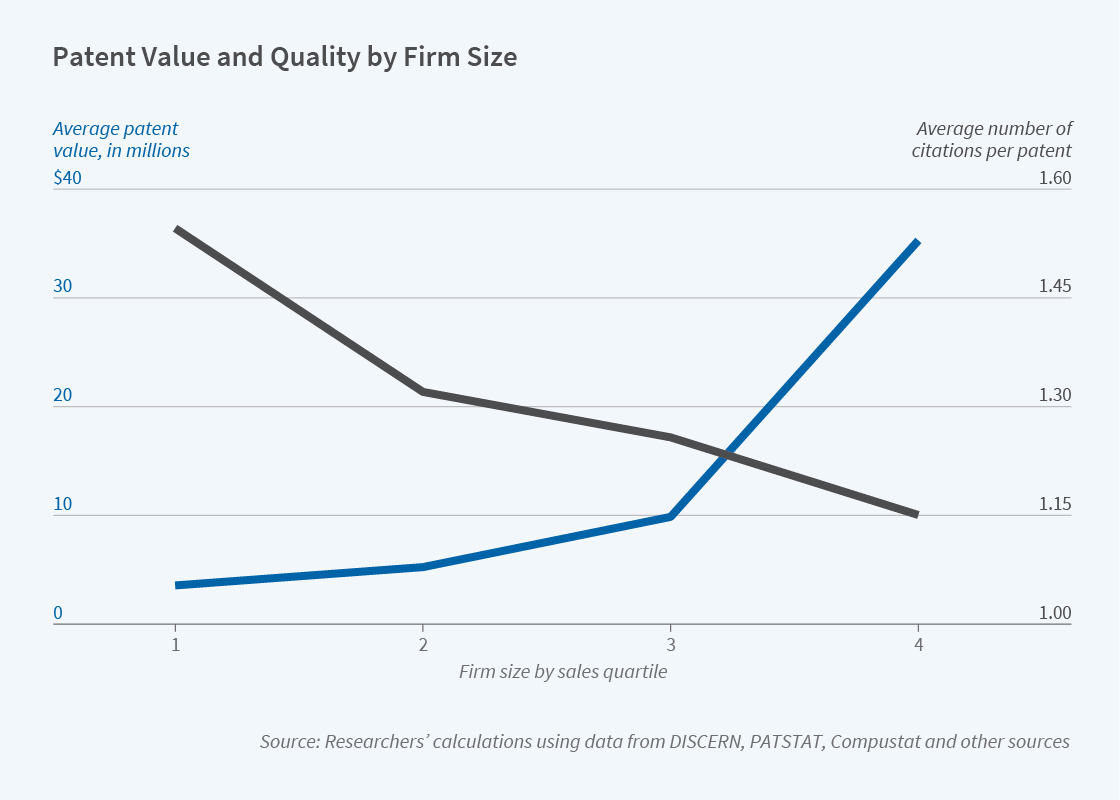 Larger firms tend to profit more from their inventions than do their smaller counterparts. In Invention Value, Inventive Capability, and the Large Firm Advantage (NBER Working Paper 30354), Ashish Arora, Wesley M. Cohen, Honggi Lee, and Divya Sebastian find that this does not occur because large firms produce inventions of higher technical quality. Rather, it is because they extract more value from their inventions, likely through more effective commercialization, which includes product development, marketing, distribution channels, and manufacturing. The researchers estimate that doubling a firm’s size is associated with an increase of between 5 and 16 percent in the value of a given invention, depending on whether or not one controls for the firm’s capitalization.

The study analyzed 2,786 manufacturing firms from 1980 through 2015. Sales, various other accounting measures, and industry codes were collected from the Standard & Poor’s CRSP/Compustat database. The median firm had sales of $263 million and a market capitalization of $364 million, while the means were $3.1 billion and $4.2 billion, respectively. Information on the patents owned by the US-headquartered public firms was extracted from the Duke Innovation & SCientific Enterprises Research Network, the US Patent and Trademark Office, and the European Patent Office.

Average invention value increases with firm size even though average invention quality declines because larger firms have a greater capacity to capture value from their inventions.

Invention value was measured in two ways. One relied on the rise in the patent-owning firm’s stock price just after a patent was issued. The other used the share of inventions patented in multiple jurisdictions. Filing in multiple jurisdictions is costly, and the researchers assume that patent applicants were likely to incur those costs only if they believed a given invention was of high value. Invention quality was measured using the number of forward citations for each patent, reflecting the view that inventions of higher technical quality will induce others to patent similar or follow-on inventions.

While average invention value increased with firm size, average invention quality declined by an estimated 2.7 percent when firm size doubled. This translated into about 0.04 fewer normalized citations. For comparison, the average number of forward citations of a patent, after normalizing by the mean citation count within each grant year and Cooperative Patent Classification code class pair, was 1.3.

The option to sell or license patents or access outside commercialization capabilities reduced the large firm advantage. The researchers found that small firms that sell patents to larger firms indirectly take advantage of the commercialization capabilities of their larger counterparts. In industries in which patents are commonly sold, the relationship between firm size and the private value of an invention was about 13 percent weaker, and the relationship between firm size and invention quality was about 11 percent weaker, than in other industries.

Development and Growth
Innovation and R&D