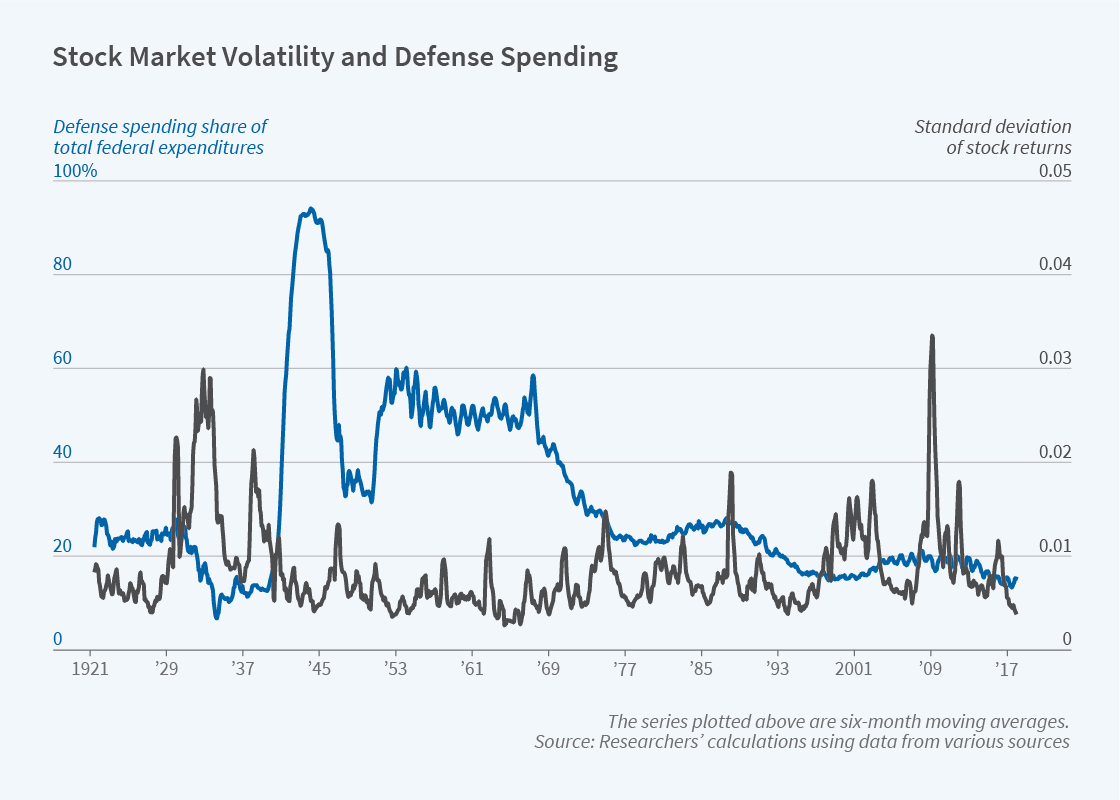 Wars and other periods of conflict typically heighten political uncertainty, but US stock volatility is 33 percent lower than usual in such times. A new study, Stock Volatility and the War Puzzle (NBER Working Paper 29837), proposes to explain this long-standing conundrum.

War causes the defense share of government spending to rise, sometimes dramatically. This makes the future profitability of a wide swath of companies more predictable and, thus, less volatile, according to researchers Gustavo S. Cortes, Angela Vossmeyer, and Marc D. Weidenmier. Constructing a dataset of US defense spending from 1890 to 2017, they find that higher spending predicts lower stock volatility in aggregate and particularly for firms that produce military goods. They also find that analysts’ earnings forecasts for such firms became more uniform at the onset of recent conflicts, including that in Afghanistan in 2001 and Iraq in 2003. These effects are not limited to the US market: higher US defense spending is associated with less volatile world equity markets.

None of the conflicts studied by the researchers were fought in the US, which reduced volatility because the US capital stock was not subject to massive and ongoing damage. Two wars that were fought on US soil — the War of 1812 and the American Civil War — took place before the sample period.

Different types of military spending affect market volatility in different ways. Spending by the Navy, Air Force, and other non-Army defense units reduces stock volatility more than Army spending does. Since at least the 1980s, when the US Treasury began detailing how each branch spends its funds, these entities generally have spent a higher share of their budgets on procurement, research and development, and testing and evaluation than has the Army, which typically spends more on personnel, operations, and maintenance. This suggests that the other armed services are more involved in contracts, often long-lasting ones, with the private sector.

The researchers also study how military spending affects analysts’ earnings estimates for individual firms. They designate companies with at least 20 percent of their revenues from federal contracts as defense related. Since their firm-specific data start in 1990, they examine the earnings forecasts during the four most recent conflicts: the 1991 Gulf War, the 1998 war in Kosovo, the 9/11 terrorist attacks and ensuing war in Afghanistan, and the 2003 invasion of Iraq.

Stock Volatility and the War Puzzle