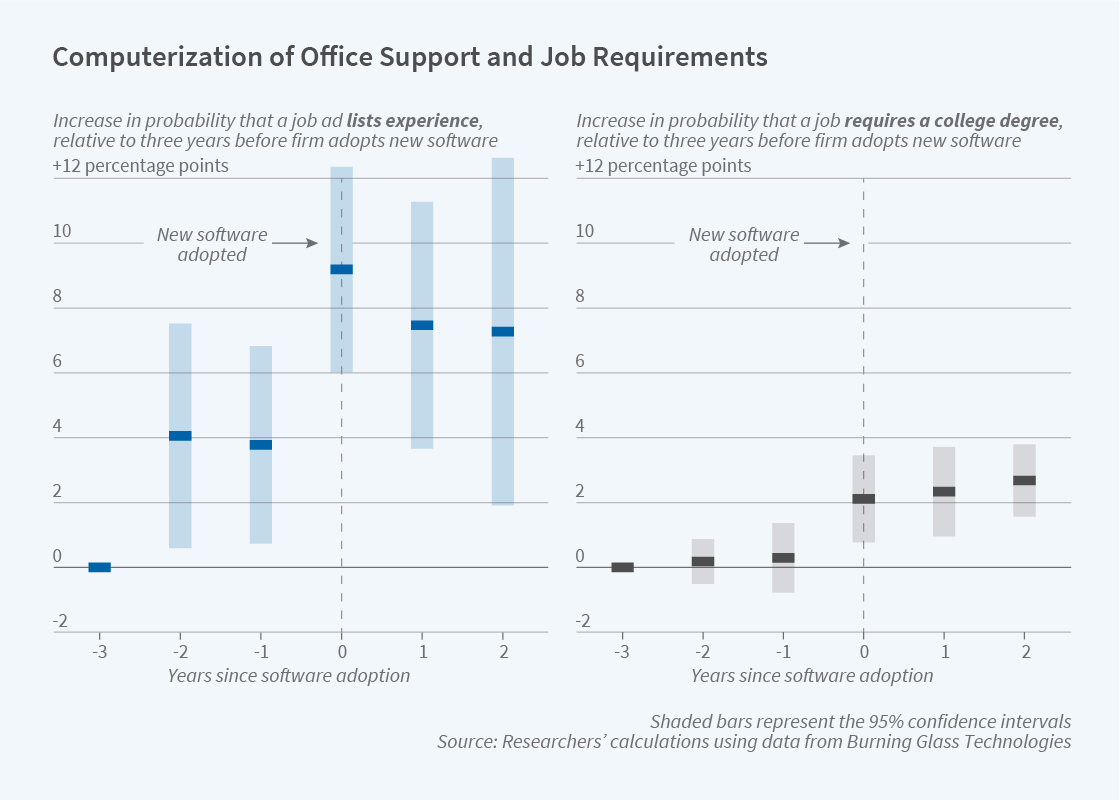 In Computerization of White Collar Jobs (NBER Working Paper 29866) Marcus Dillender and Eliza Forsythe investigate how the increase in computer use changed hiring requirements and job content. Contrary to popular fears that the use of labor-saving technologies would lead to “technological unemployment,” they find that the adoption of office and administrative support software had a modest positive effect on wages and employment in local labor markets. In general, adopting the new technology increased the skill levels needed for office and administrative support positions. Although overall employment in office support fell, wages for college-educated women in support positions grew by over 3 percent on average.

Economic theory is ambiguous about the likely labor market effect of adopting a new technology. Increased use of software by office and administrative support employees could increase the productivity of existing workers, leading to relative wage gains. It could also lead to relative wage losses if the technology substitutes for people, decreasing demand for office and administrative support workers. Both effects seem to operate in the office support market.

The researchers estimate the change in the skill level needed to operate the technology used in office support jobs by studying 8 million job ads extracted from Burning Glass Technologies’ database. The sample ads were posted in 2007 and from 2010 to 2016. The researchers use the Department of Labor’s O*NET data on job characteristics to identify technologies and classify them into 69 categories. An ad for a secretarial position, for example, might mention proficiency with Microsoft Excel or Corel Quattro Pro, both of which would be in the spreadsheet category. Mentions of educational and experience requirements were also used to measure job skill requirements. Firms were defined using firm name and commuting zone so that different branches of a nationwide business could be treated differently.

About 1 million ads that were posted in 2007 and 2010 did not list any technology requirements for office support workers. The firms that posted those ads added technology requirements to their ads in subsequent years. They asked for more education in the years before they adopted new technology, and they increased their education requirements substantially in the year they adopted new technology and in the subsequent two years. Analysis of the top 1,000 phrases from the job content requirements in the ads, such as typing, data entry, accounting, research, and management, also suggests that new technology adoption broadened job task content. Office and administrative support jobs became more skilled and encompassed cognitive tasks that are harder to computerize.

The researchers did not find any reduction in demand for lower-skill or traditional office support tasks after the adoption of new software technologies, suggesting that office support jobs are likely to remain an important segment of the labor market for the foreseeable future.