Explaining the Decline of the US’ Net Foreign Asset Position 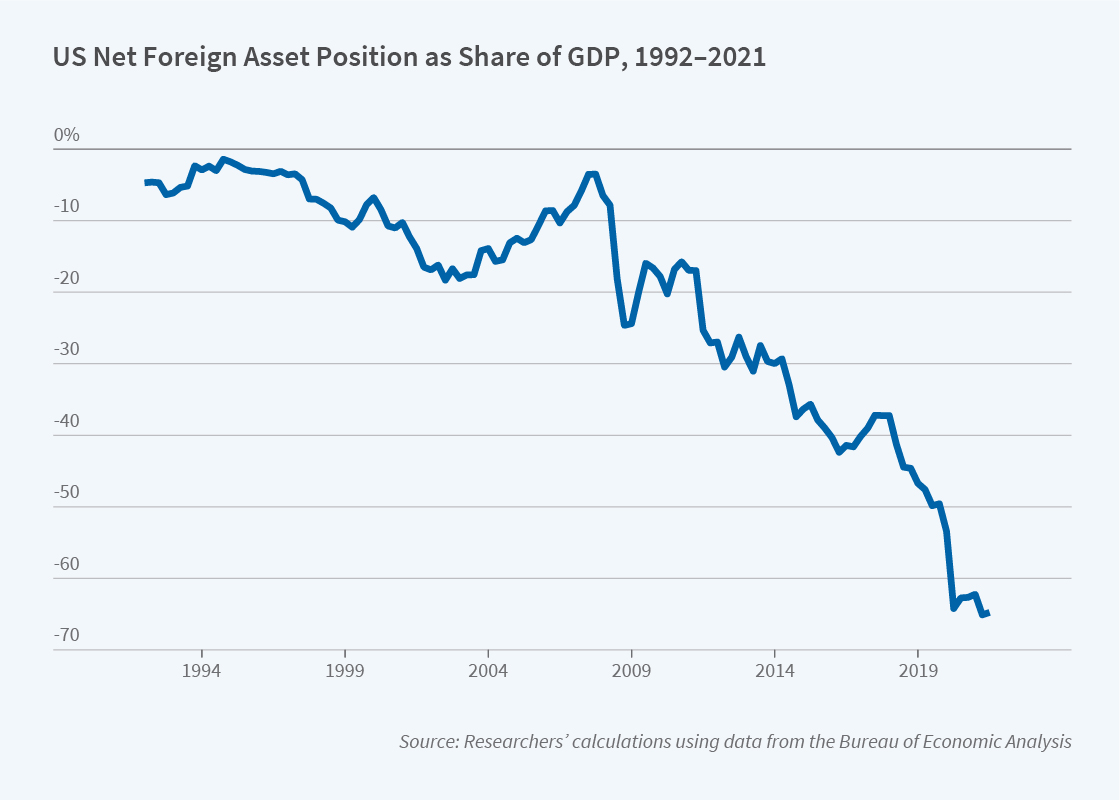 For decades, the United States appeared to enjoy a special privilege: although it imported more goods and services than it exported, its net foreign asset (NFA) position remained only slightly negative. Since the Great Recession, that privilege has disappeared and the NFA position — the difference between the foreign assets held by Americans and the US assets owned by foreigners — has declined sharply, even when measured as a percentage of gross domestic product (GDP).

In The End of Privilege: A Reexamination of the Net Foreign Asset Position of the United States (NBER Working Paper 29771), Andrew Atkeson, Jonathan Heathcote, and Fabrizio Perri analyze why the NFA has deteriorated so much. They find that most of the change can be explained by a boom in US equity values that was not matched by foreign stock prices. Their paper upends the conventional explanation for America’s so-called special privilege, which for a time allowed the United States to fund its large trade deficit with its earnings on foreign assets.

Since the Great Recession, Americans have earned only moderate returns on their foreign investments while foreigners have reaped a bonanza on the boom in US stocks.

In the early years of this millennium, the most common explanation for the US’ small NFA position was that Americans owned high-return foreign equities while foreigners held low-return US assets such as Treasury bonds. Data available at the time supported that view. By analyzing newer federal data, however, more finely tuned to capturing economic and financial flows and balance sheet positions, the researchers uncover a different explanation. They find that the relative performance of foreign and US holdings within asset classes, rather than differences in the type of assets held, accounts for most of the changes in the US NFA position between 2010 and 2021.

The researchers consider two possible explanations for the stronger returns on US stocks than their global counterparts during the last decade. One is that US firms made substantial investments in productive capital that are not measured in the national accounts, while the other is that they experienced a rise in market power and a corresponding increase in monopoly profits. If the first explanation was correct, the US would have experienced a period of low or negative measured output and a huge trade and current account deficit, far beyond the deficit actually reported. The researchers conclude that since this was not observed, unmeasured investments may have contributed to the decline of the NFA position, but they are unlikely to be a dominant factor. A rise in monopoly profits and a larger share of value added accruing to the owners of firms, however, appears much more consistent with the NFA movement and other macroeconomic data. Since foreign investors own roughly 30 percent of the US corporate sector, their share of the increased profitability of this sector corresponds to an annual flow of about 1.3 percent of US GDP.

The End of Privilege: A Reexamination of the Net Foreign Asset Position of the United States