Rising Macroeconomic Volatility Is Associated with Increases in Foreign Assets 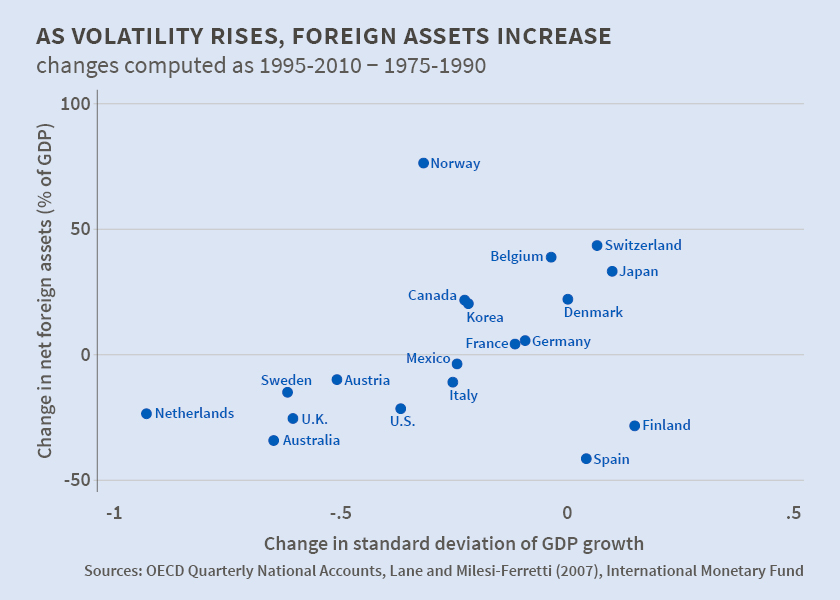 The estimated relation between volatility and imbalances is statistically significant and economically important.

The more volatile a nation's economy relative to its partners, the more resources its residents choose to hold in foreign assets, according to research reported in Macroeconomic Volatility and External Imbalances (NBER Working Paper No. 20872). A 50 basis point (one-half of one percentage point) rise in the volatility of GDP over 10 years is positively associated with an increase in net foreign assets equal to around 8 percent of GDP, write authors Alessandra Fogli and Fabrizio Perri. They develop an open-economy model to explain this dynamic, in which countries face shocks to their macroeconomic volatility.

"The key mechanism is precautionary motive: more uncertainty induces residents to save more, and higher savings are in part channeled into foreign assets," they write. "We conclude that both data and theory suggest uncertainty/volatility is an important determinant of the medium/long run evolution of external imbalances in developed countries."

This study suggests both empirically and theoretically that macroeconomic volatility is a major factor in explaining how some nations develop external imbalances and others don't.

The authors' empirical results were drawn from an analysis of all the OECD countries with comparable macroeconomic data beginning no later than the early 1980s. The estimated relation between volatility and imbalances is statistically significant and economically important.

From 1980 to 2010, for example, volatility in the United States - measured as the standard deviation of quarterly real GDP growth minus the average of the other countries' standard deviation of quarterly real GDP growth over the interval - declined some 40 basis points. During that period, the net foreign assets of the U.S. fell by nearly 25 percent of GDP. Japan, by contrast, saw its relative volatility rise about 100 basis points. Its net foreign assets increased by 50 percent of GDP.

Many forces can lie behind these changes. In order to assess the effect of volatility separately from other factors, the study controls for many influences on a country's net foreign asset position, including country characteristics such as the quality of its institutions, factors affecting all countries such as financial globalization or the rise of new industrial powers such as China and India, changes in the country's growth rate, inflation, trade and financial openness, and finally demographic structure. Even after controlling for all these factors, the authors find that changes in relative volatility can explain between a fourth and a third of the observed changes in the net foreign assets across OECD nations.

"Macro uncertainty, as well as features shaping the precautionary motive, should be a major factor to consider when discussing the causes, the sustainability and desirability of observed global imbalances," the authors conclude.