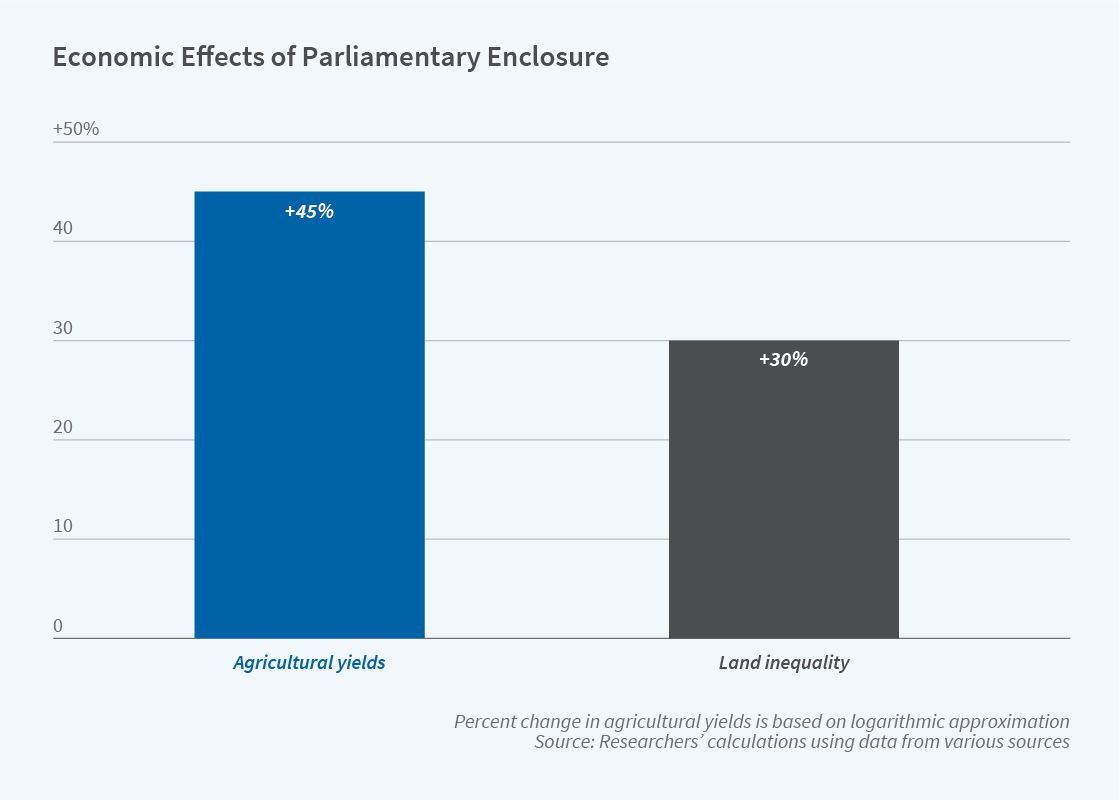 Enclosure involved privatizing rural land in England that had been in common ownership and consolidating scattered plots that had been farmed by individual households. The process began in the Middle Ages, and originally took place only when there was unanimous local agreement. At the beginning of the 18th century, large parts of the country had not been enclosed.

Around 1700, Parliament allowed owners of three-quarters of the land in an area, by value, to petition for an act of enclosure of all common property. This institutionalized a process for proceeding with enclosure over the opposition of some affected residents. By about 1900, virtually all of England was under private, consolidated ownership.

Parliamentary enclosures increased agricultural yields as well as inequality in the distribution of landholdings in enclosing parishes.

In The Economic Effects of the English Parliamentary Enclosures (NBER Working Paper 29772), Leander Heldring, James A. Robinson, and Sebastian Vollmer study all English Parliamentary enclosure acts between 1750 and 1830 and describe their impact. The researchers assemble data on agrarian outcomes in over 15,000 parishes, and they compare parishes that were enclosed in the Parliamentary period, 1750–1830, to those that were not enclosed by this method at the end of the period. Because the decision to file an enclosure petition likely correlated with parish attributes, the researchers develop an estimation strategy that draws on information on the success or failure of enclosure petitions for nearby parishes.

The analysis finds that by 1830, enclosures were associated, on average, with a 45 percent increase in agricultural yields. Inequality in land ownership, measured by the value of land held by different owners, also increased following enclosure. The researchers also estimate that the Gini coefficient, a common measure of income or wealth inequality, rose by 30 percent in parishes that enclosed relative to those that did not. These results are in line with theoretical arguments pointing to potential inefficiencies in shared governance and ownership of land. Even in communities as small, cohesive, and stable as a parish, informal governance mechanisms coordinating behavior and investment appear to have been less efficient than those of private ownership.

Contemporary advocates of Parliamentary enclosure suggested that it promoted investment, innovation, and experimentation in new techniques. The researchers explore the claim regarding innovation by examining the number of agricultural patents filed in a parish, which increased modestly following enclosure. The quality of local infrastructure, measured by the probability that surveyors rated a road in the parish to be of poor quality, also improved. The share of acreage in a parish that was either sown with turnips or subject to appropriate fallowing practices — ways to replenish depleted soils and improve output — also rose following enclosure. Prior to enclosure, the practices may not have been adopted because their implementation required coordination among villagers with disparate interests in commonly governed fields. Parliamentary enclosure gave everyone the freedom to implement best practices without the need for coordination.

Microeconomics
History
Other History
Development and Growth
Growth and Productivity

The Economic Effects of the English Parliamentary Enclosures