The Effects of Mandatory Investment in Wildfire Resilience 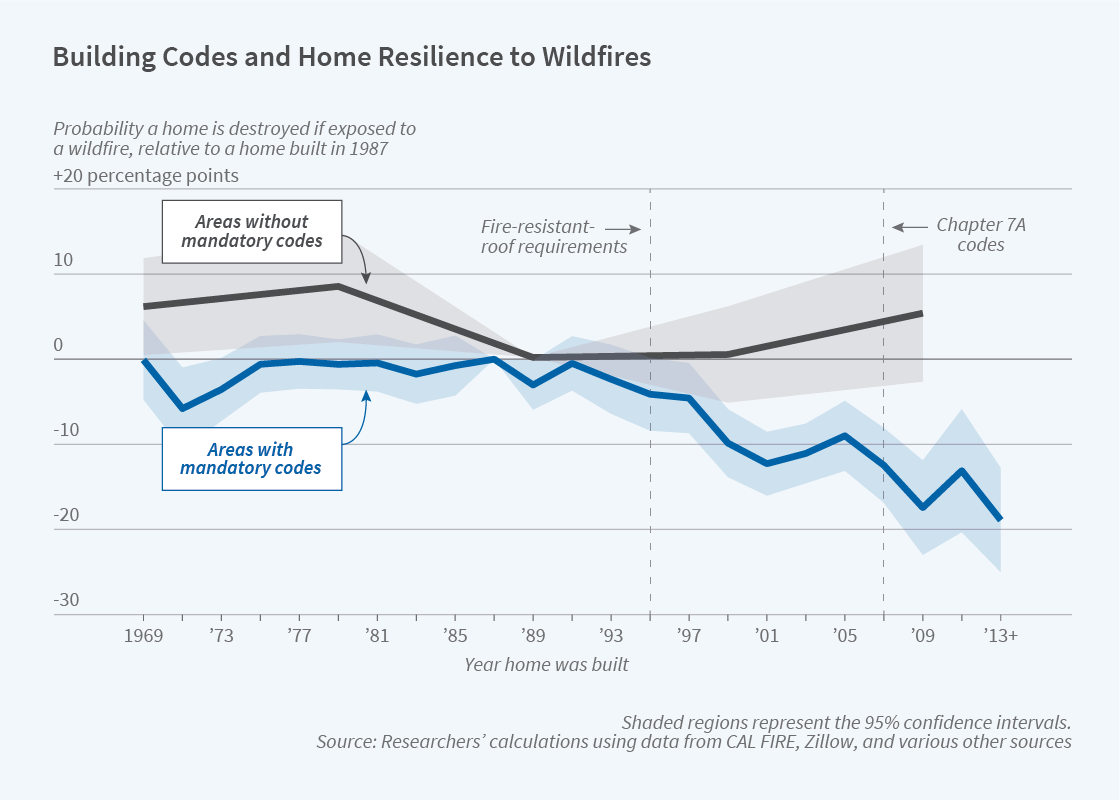 California homes built after 2008 and subject to statewide wildfire building codes are 40 percent less likely to be destroyed if a wildfire strikes than homes built in 1990.

Wildfires have ravaged California in recent decades, often destroying homes and displacing residents. Building codes that require fire resistance in new construction have been one of the responses to this devastation. In Mandated vs. Voluntary Adaptation to Natural Disasters: The Case of US Wildfires (NBER Working Paper 29621), Patrick W. Baylis and Judson Boomhower examine the impact of mandatory statewide regulations on new residences. They find that newer homes, built under these rules, are much more likely to survive a wildfire.

In the aftermath of the Oakland Hills Firestorm of 1991, California enacted a series of regulations for new construction in fire-prone areas. Revised several times over the last 30 years, the regulations mandate fire-resistant and fire-protective material for roofing, siding, doors, and windows. The codes apply wherever the state provides firefighting services, which is the case in many rural areas. Municipalities and other areas that provide their own firefighting services have historically had the option of adopting the standards for areas designated by the state as Very High Fire Hazard Severity Zones. As of 2007, 151 of 208 local governments in fire-prone areas had either enacted the standards or imposed what they consider comparable rules.

The researchers assemble a database of homes that are at risk of wildfire damage in California, Arizona, Colorado, Oregon, and Washington. Their sample includes 55,408 single-family homes that experienced 112 fires between 2003 and 2020. Thirty-nine percent of these homes were destroyed. Among these states, only California has enacted wildfire building codes at the state level. The other states encourage residents to implement fire-protection measures through informational campaigns and incentive programs.

The researchers find that mandatory fire-resistance building codes achieve substantially larger survival benefits than these voluntary approaches. A California house built in 2008 or later is 16 percentage points, or about 40 percent, less likely to be destroyed by wildfire than a home with the same wildfire exposure that was built in 1990, before California adopted mandatory statewide wildfire codes. The benefits also spill over to neighboring homes that are not built to the new codes. If an older home is located within 33 feet of a new or updated structure, it is 2 percentage points, or 6 percent, less likely to be destroyed in a wildfire than a home without a more modern neighbor.

Having established that building codes enhance housing resiliency, the researchers estimate the minimum annual wildfire risk level at which universal mitigation would be cost effective. They conclude that building codes for new homes produce substantial net benefits in the most fire-prone areas of California, suggesting that enacting similar codes in fire-prone areas of other western states would likely pass a cost-benefit test.

Mandated vs. Voluntary Adaptation to Natural Disasters: The Case of U.S. Wildfires