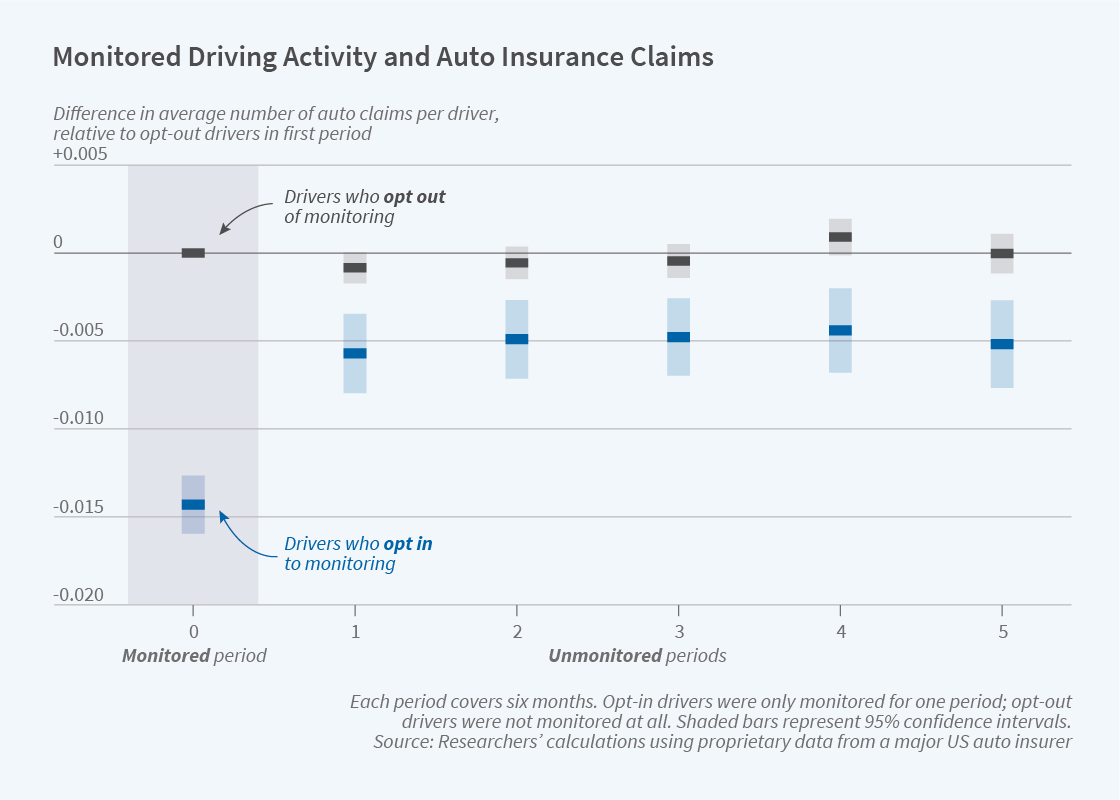 An opt-in program allowing drivers to provide their insurer with information on their driving behavior reduced the volunteers’ premiums and raised the company’s profits.

New technologies have allowed consumers to monitor their own behaviors and to sell their data to firms. In the auto insurance industry, for example, some insurers now reward customers for having devices in their cars that track their driving behavior. Insurers can then use this proprietary data to infer drivers’ accident risk and to adjust their premiums accordingly.

In Buying Data from Consumers: The Impact of Monitoring Programs in US Auto Insurance (NBER Working Paper 29096), Yizhou Jin and Shoshana Vasserman examine the first major data-sharing program of this form in the US auto insurance industry. They collect detailed plan and customer data on more than one million customers during the 2012–16 period from the large insurance firm that sponsored this program.

The researchers also investigate customers’ demand for insurance and their decision to opt into monitoring based on their level of accident risk, risk aversion, expectations of future premiums, and aversion to being monitored. They estimate that on average, customers would implicitly pay $93 to avoid monitoring, perhaps reflecting privacy concerns or higher driving effort when being monitored.

Monitoring allows the firm to offer lower rates to safer drivers. However, since the firm sponsoring the program is the only insurance company that knows its drivers’ monitoring scores, it can charge safe drivers a premium that is below the offerings of competing firms, while still charging a higher markup over its true costs. In contrast, competing insurers lose their safer customers to the monitoring firm, and their profits decline. Overall, the researchers conclude that the sum of welfare gains to consumers, increased profits for the monitoring firm, and lower profits for rival insurers is positive — about $13 per driver per year. About two-thirds of this gain is due to monitoring inducing safer driving; the remainder is due to the fact that safer drivers can purchase insurance that is priced more accurately for their risk type.

The researchers also ask whether the firm could profit by adjusting the pricing strategy that is observed in the data. A profit-maximizing strategy would balance two opposing incentives: drivers need substantial discounts at sign-up in order to opt into monitoring, but these discounts must later be recouped. To capture this dynamic, the researchers model a pricing strategy in two phases. In the first, the firm invests in attracting consumers to the monitoring pool, either by offering an upfront discount to those who opt in or by surcharging those who opt out. The researchers calculate that the optimal discount would be higher and would attract many more customers to monitoring than the status quo.

In the second stage, once information on driver behavior has been “harvested,” the insurer uses the data to set more profitable renewal premiums. The researchers conclude that if the firm made optimal strategic use of the information that it collected, it would share less of the potential premium reduction with consumers than it did in practice. Profit-maximizing pricing — both a steeper discount for being monitored, which would lead to more drivers being monitored, and a smaller premium reduction for demonstrated safety — would increase the overall gains from the monitoring program from about $13 to about $21 per driver.

If proprietary ownership of monitoring data were banned, the incentives for insurance firms to invest in monitoring programs would be severely reduced because competitors could free-ride on the data that is collected. The researchers conclude that while this would lead to lower premiums for monitored consumers, the welfare gains would be more than offset by losses from firms choosing to invest less in monitoring in the first place.

Buying Data from Consumers: The Impact of Monitoring Programs in U.S. Auto Insurance

SI 2019 IT and Digitization