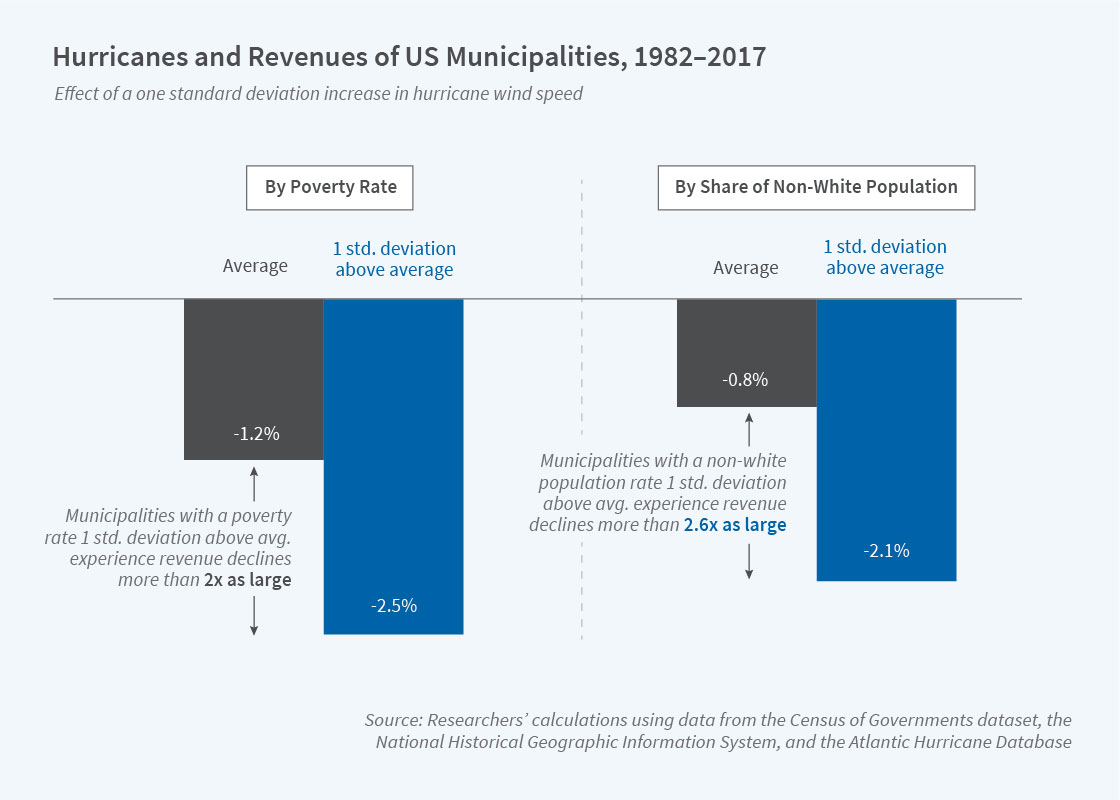 A decline in business activity and the out-migration of residents take a toll on tax revenues and result in cutbacks of spending programs that benefit low-income households.

Hurricanes struck more than 2,000 municipalities in US Atlantic and Gulf states between 1980 and 2017. Even a decade after the winds die down and the flood waters recede, municipalities thrashed by hurricanes still are experiencing lower revenues and associated declines in public services and investment relative to otherwise similar communities spared by the damaging storms.

Tax revenues drop immediately after a storm, as business is disrupted and some residents may move away. Although an influx of aid provides a short-term cushion, localities hit by storms see their revenue bases erode as people move out and property values and economic activity decline. In the five year period between six and ten years after a hurricane hits, local tax revenues are still 7.2 percent lower than they would have been without the storm. These findings are reported in Local Public Finance Dynamics and Hurricane Shocks (NBER Working Paper 28050) by Rhiannon Jerch, Matthew E. Kahn, and Gary C. Lin. Even a minor hurricane can lead to a 3 percent decline in taxes, fees, and other local revenue sources over the same period.

The researchers arrive at their estimates by comparing municipalities in the same state that possess similar demographic and geographic characteristics but differ in whether fate put them in the path of a hurricane. In the decade following a major hurricane — one with winds exceeding 96 knots — total revenue declines more than four times more than in the case of a minor hurricane. Employment falls by 4 percent after a major storm, compared with 0.4 percent after a minor one.

The revenue drop leaves storm-struck towns and cities with less to spend on local services, which include schools, sanitation, policing, parks and recreation, and public works. In 2017, local government accounted for 35 percent of total government goods and services spending — spending exclusive of transfers.

Less-affluent municipalities — those with poorer, less-educated residents and a higher proportion of racial minorities — are hardest hit by the post-storm dislocation, and the budget ax often falls hardest on programs that benefit low-income households, such as public transportation.

Battered budgets make borrowing for capital expenditures, including infrastructure projects that could reduce the cost of future storms, more difficult. Rating agencies often downgrade the bond ratings of municipalities that suffer severe storm damage. Facing higher interest costs, sampled municipalities cut back on total debt by between 19.2 and 25.9 percent in the decade after a major hurricane. This suggests a potential “vicious cycle” for local governments, as natural disasters increase their cost of debt and deplete their tax base, thereby inhibiting their ability to make new investments.