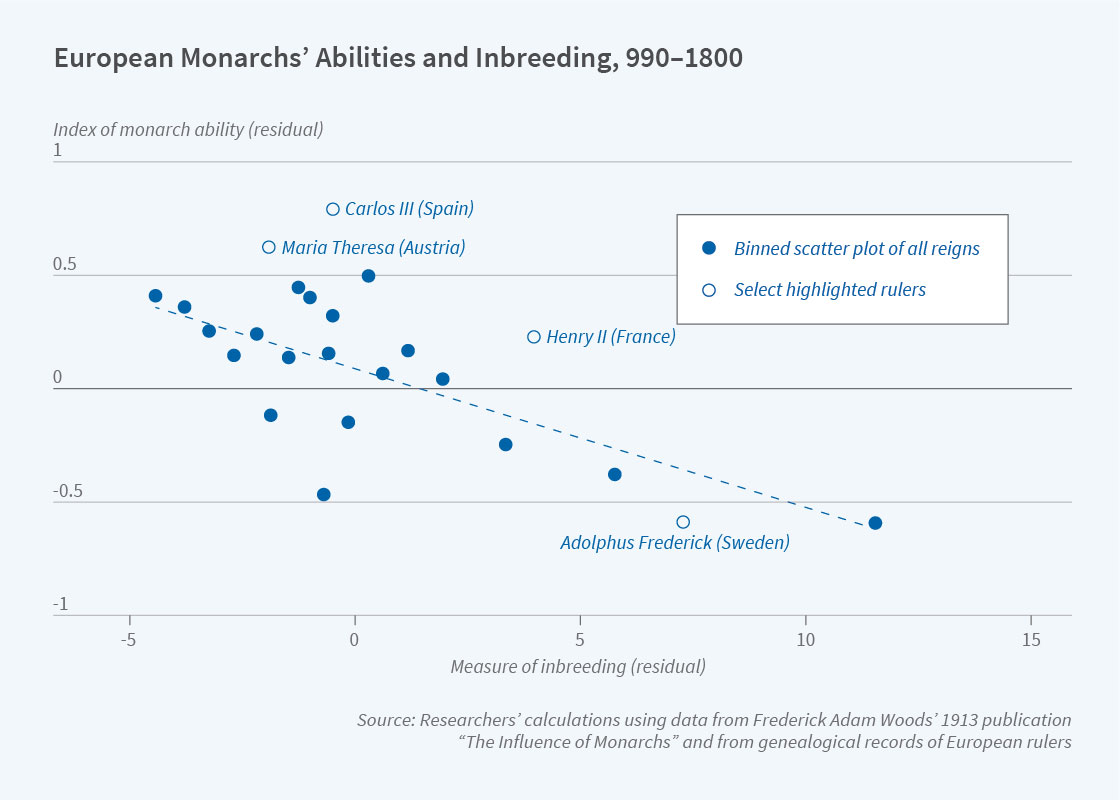 A ruler’s talents mattered more to national economic success in the absence of parliamentary constraints.

The role of national leaders in accelerating or hindering their nation’s economic growth is a subject of long debate. In History’s Masters: The Effect of European Monarchs on State Performance (NBER Working Paper 28297), Sebastian Ottinger and Nico Voigtländer offer new empirical evidence on this question. They analyze the reigns of 331 monarchs in 13 European states over the period 990–1800, and construct a measure of monarchical ability based on historical records. To gauge a causal relationship, the researchers exploit quasi-random variation in ruler ability due to inbreeding of dynasties. They find that a one standard deviation increase in a summary measure of ruler ability led to a 0.7 standard deviation increase in a subjective measure of state performance, and a 10 percent increase in the land area of the monarch’s domain.

The study utilizes estimates of each monarch’s intellectual ability constructed over a century ago by the historian F. A. Woods. His analysis was based on extensive review of biographical records about each ruler. This coding is subject to concerns of endogeneity bias — for example, if a state’s performance affected how historians assessed the corresponding ruler’s ability. To address this issue, the researchers exploit a combination of two historical features: rulers were appointed according to primogeniture, independent of their ability, and ability, in turn, varied due to widespread inbreeding among the ruling dynasties of Europe. Using crowdsourced online genealogy of European noble families, the researchers find that greater inbreeding is associated with lower assessments of ruler ability. This relationship holds even when exploiting only “hidden” variation in inbreeding that had built over previous generations and was unknown to monarchs when they made decisions about marriage.

The relationship between monarchical ability and state performance is only observed when the ruler’s autonomy was not constrained by other governing bodies, such as parliaments. In northern Europe in particular, the increasing power of parliaments from the 17th century onward came at the expense of monarchs, and coincided with declining strength of the relationship between a ruler’s ability and national outcomes. The researchers suggest that the increasing influence of parliaments may have shielded northern European states from the potential negative effects of their increasingly inbred rulers.

England is offered as an illustration of the relevance of constraints. Prior to 1600, when England’s monarchs were relatively unconstrained, the relationship between monarchical ability and state performance is similar to that in other Western European nations. During the 1600s, civil conflict and the Glorious Revolution led to substantial constraints on the powers of the crown. After this point, there is no link between monarchical ability and measures of England’s performance. The association between the ruler’s ability and national performance is strongest in Prussia, a state with few institutional constraints on the monarch.

History’s Masters: The Effect of European Monarchs on State Performance