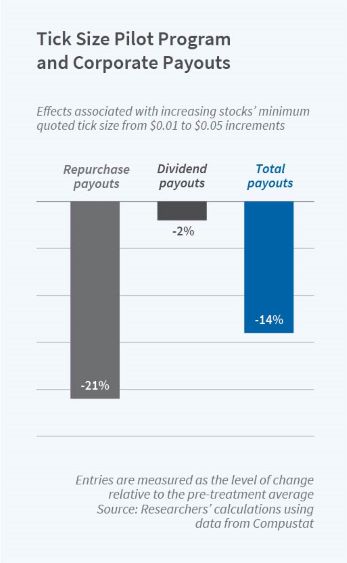 A series of regulatory changes beginning in the mid-1990s reduced firms’ cost of repurchasing their shares and contributed to increases in buybacks.

Stock repurchases by US corporations have trended higher in recent decades, particularly in comparison to corporate dividend payouts. One explanation is that the capital gains that buybacks generate for investors are generally taxed less heavily than dividend payments. However, the tax rate difference between dividends and capital gains in the last two decades has been smaller than in earlier years, making it difficult to explain rising repurchases with a tax-based explanation alone.

In 1982, the Securities and Exchange Commission (SEC) imposed price ceilings on share repurchases in order to prevent firms from inflating their share prices by outbidding other traders. This regulation, Rule 10b-18, specified that firms should buy their shares at prices that do not exceed the highest independent bids or last transaction prices. As firms cannot repurchase shares on open markets by offering higher prices than other traders, market structure emerges as a first-order effect because it determines execution priority among traders who quote the same price. Decades ago, dealers enjoyed the privilege of trading before issuers at the same price. The dealer priority at price ceilings provides one explanation for why share repurchases were low.

A series of market reforms beginning in the mid-1990s reduced the trading-related frictions of repurchasing shares. These reforms included the Manning Rule (1994) and the Order Handling Rules (1997), which increased the repurchasing firm’s priority in executing trades and reduced the market maker’s competitive advantage, and the Common Cents Stock Pricing Act (1997), which reduced the minimum unit of share price movements — the tick size — from 12.5 cents to 6.25 cents in 1997 and from 6.25 cents to 1 cent in 2001. A more continuous price grid relaxes the price ceiling and reduces the level of competition at the same price. In 2003, the New York Stock Exchange installed automated quotes, which allowed issuers and their brokers to monitor markets in real time using computer algorithms, effectively leveling the playing field for issuers and market makers. The researchers find an increase in share repurchase activity after each of these regulatory or institutional reforms.

They also study the effect of the 2016 Tick Size Pilot Program. In contrast to the regulatory reforms of the last three decades that lowered the cost of firms entering the stock market to repurchase shares, this SEC program raised the tick size for 1,200 randomly selected stocks from 1 to 5 cents, while preserving the tick size at 1 cent for a similar-sized control group. During this two-year experiment, share repurchases fell by 21 percent for firms facing higher tick sizes, while dividend payouts were unchanged. This effect was concentrated among firms with bid-ask spreads of less than 5 cents before the start of the pilot.

In another related experiment, the pilot restricted the execution of off-exchange trades, so-called “dark pool” trades — which give certain large investors the ability to trade large positions without impacting market prices — by requiring dark pools to improve the National Best Bid and Offer by more than 2.5 cents when they execute trades. This restriction unintentionally banned share repurchases through dark pools because Rule 10b-18 regards buying above the best-bid price as an indicator of price manipulation. For firms in this part of the experiment that had pre-pilot bid-ask spreads of less than 5 cents, repurchases dropped 19 percent relative to similar firms without the dark-pool restriction.

The researchers conclude that market structure regulations and the price ceiling for carrying out share repurchase programs are important determinants of buyback activity, and that regulatory changes have contributed to the growing popularity of this form of corporate distribution.