Exploring the Timing of Reviews and Approvals of New Drugs 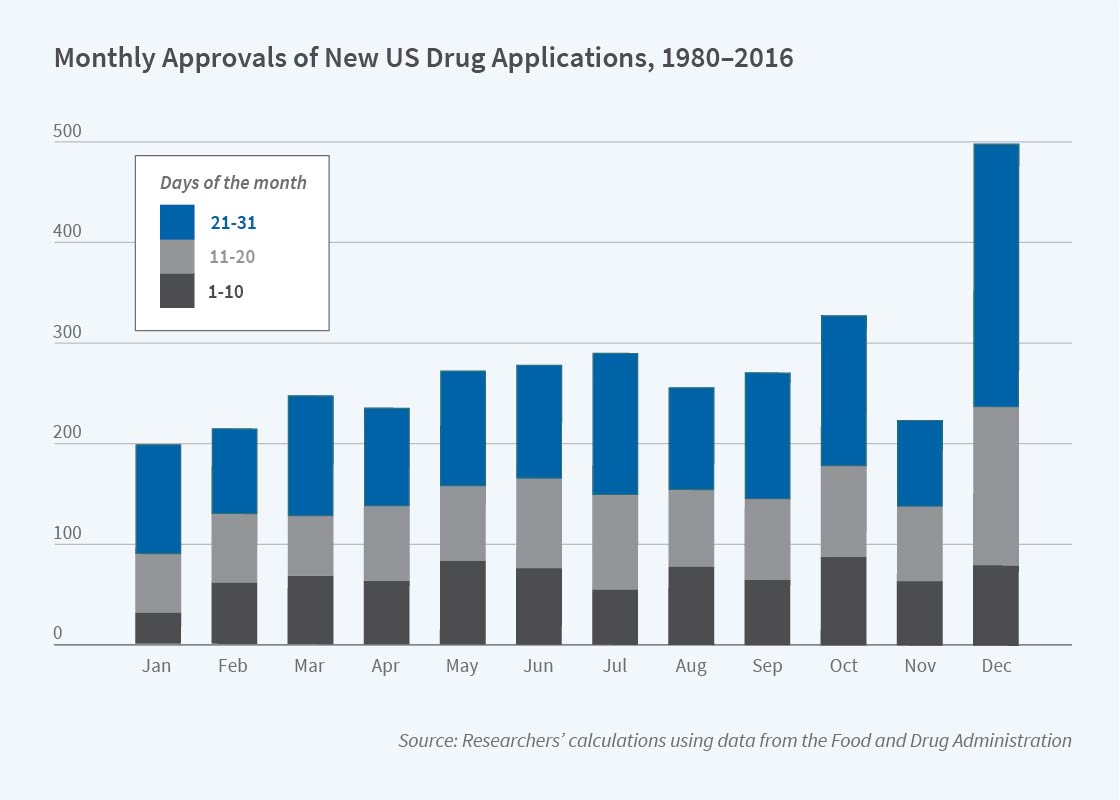 About 20 percent of drug approvals come in pre-holiday surges in December. They are associated with more adverse outcomes than drugs approved at other times.

Government approval of drugs surges before major holidays, at month-end, and especially at the end of the year, according to research by Lauren Cohen, Umit Gurun, and Danielle Li. In Internal Deadlines, Drug Approvals, and Safety Problems (NBER Working Paper 28071), they find that drugs approved during such surges are associated with more hospitalizations, life-threatening incidents, and deaths than those approved at other times. The researchers estimate that rushed reviews lead to between 1,400 and 9,000 lives lost per year.

Twenty-one percent of the drugs approved in a typical year in the US, EU, Japan, China, and South Korea are approved in December. Approvals in that month are double those in any other month. In the US, the December approvals represent about 15 percent of the annual total.

The idea that informal production targets cause spikes in output is not new. Such patterns have been documented in retail sales, patent office approvals, judicial decisions, and spending by federal agencies.

The researchers attribute these approval patterns to a “desk clearing objective” on the part of reviewers preparing for time out of the office. They point out that while there are no formal deadlines for drug reviews, reviewers typically are evaluated, in part, on the share of applications that get a timely review. Different nations have different definitions of timeliness: within 300 days for a regular review and 180 days for a priority review in the US; 210 and 150 days, respectively, in the EU; and 360 and 270 in Japan. If those deadlines were the driving factor in approval decisions, then the surges of approvals would happen at these anniversaries of the start of the review process, not in December or before major holidays. These deadlines would also fail to explain the observed surges associated with country-specific holidays, such as Thanksgiving in the US and the Lunar New Year in Asia.

The researchers rule out the possibility that the reviewers save their most difficult approvals for last, and push through the easy ones first. Such behavior could explain the higher rate of adverse outcomes for December approvals. The higher rates of adverse events for December approvals persist even after controlling for the drug’s target disease and whether it was marked for priority review status. There is no evidence that drugs approved in December are more complicated or difficult to review. The researchers also look for, but do not find, evidence that firms time their submissions so that the timely review target will fall in December, when they might get a less rigorous review.

Why do reviewers appear to tilt toward approval, rather than rejection, around these self-imposed deadlines? The researchers suggest that regulators are judged in part based on the number of drugs approved, which are immediately visible, while an approved drug’s adverse effects are only evident in the future. This may create a pro-approval bias.