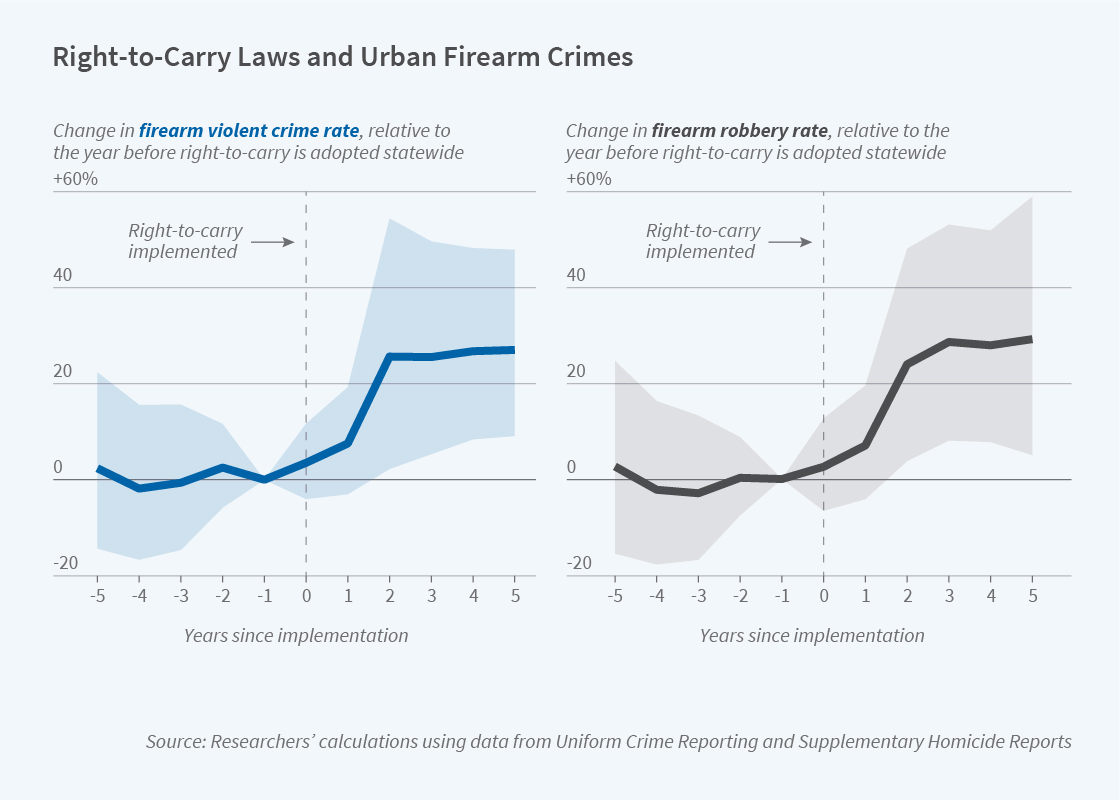 When states enact Right-to-Carry (RTC) concealed handgun laws, incidents of violent crimes, robberies, and aggravated assaults involving firearms increase by around a third in major cities as a result of the altered behavior of gun permit holders, career criminals, and the police. These adverse crime effects from RTC laws are in part generated by a substantial increase in gun thefts as well as reduced police effectiveness, John J. Donohue, Samuel V. Cai, Matthew V. Bondy, and Philip J. Cook find in More Guns, More Unintended Consequences: The Effects of Right-to-Carry on Criminal Behavior and Policing in US Cities (NBER Working Paper 30190).

RTC laws have been enacted in a number of states over the last four decades. Before 1980, most American states had either prohibited the carrying of concealed firearms or required permits for concealed carry. Today, those strictures have been greatly relaxed. When states first allowed concealed carry, they tended to adopt “may issue” laws that allowed the state to issue a concealed-carry license but did not guarantee such a license as a basic right. Today, most RTC laws stipulate that the state “shall issue” a license to any individual who requests one, with certain narrow exceptions.

In 2019, the US experienced nearly 300,000 aggravated assaults, homicides, and robberies committed with a firearm. To study the impact of RTC laws, the researchers analyze data from the 1979–2019 period for 47 US cities with a population of at least 400,000 in 2019. They study monthly FBI and Bureau of Justice Statistics reports on firearm and non-firearm crimes, the rate at which police are able to identify and arrest the perpetrators of crime (the clearance rate), and stolen property. The last data series enables them to determine the monetary value of stolen guns.

The data include four categories of violent offenses: aggravated assault, robbery, violent crime, and homicide. The first three increased by between 11 and 15 percent after RTC laws were adopted. The number of these crimes that involved firearms increased even more, by between 24 and 32 percent. Firearm homicides increased nearly 13 percent and non-firearm homicides decreased by over 3 percent. While the overall homicide rate rose 8.5 percent, this increase was not statistically significantly different from zero.

Police effectiveness decreased in cities covered by RTC laws. Across the four violent crime categories, clearance rates fell between 7 and 15 percent; the total violent crime clearance rate fell by 13 percent. This decrease in clearance rates is not explained by the increase in violent crimes. Rather, it may be due to factors such as the burdens on police time caused by greater gun carrying (investigating additional gun thefts, dealing with increases in accidental gun discharges and injuries, evaluating whether guns are being lawfully carried, or addressing wrongful gun carrying into sensitive locales), police hesitation to engage with a more heavily armed civilian population, or weakened police-community relations.

Other
Law and Economics

More Guns, More Unintended Consequences: The Effects of Right-to-Carry on Criminal Behavior and Policing in US Cities