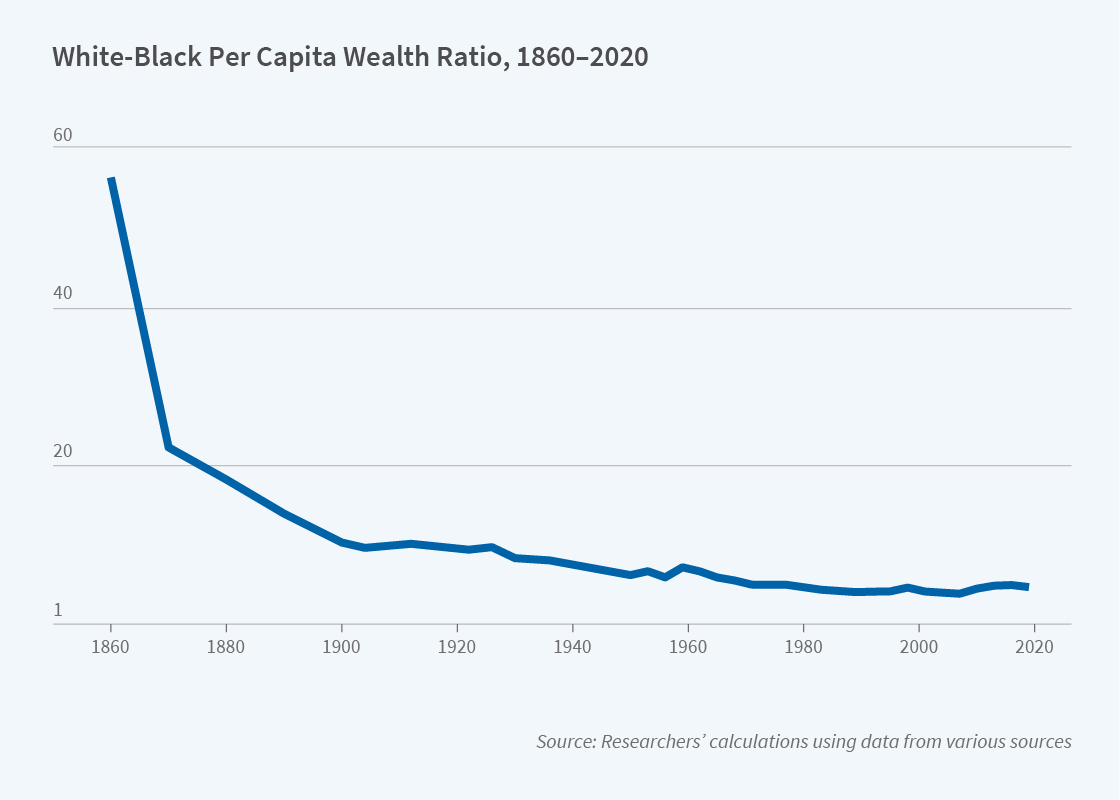 The wealth gap between White and Black Americans is nearly as large today as it was in the 1950s.

In Wealth of Two Nations: The US Racial Wealth Gap, 1860–2020 (NBER Working Paper 30101), Ellora Derenoncourt, Chi Hyun Kim, Moritz Kuhn, and Moritz Schularick construct a time series of the ratio of White-to-Black per capita wealth spanning a century and a half.

Delving into historical census data, state tax records, and multiple waves of the Survey of Consumer Finances, they construct a consistent measure of wealth by race. The ratio of White to Black per capita wealth, which was almost 60 in 1860 when 90 percent of Blacks were enslaved, fell rapidly in the decades immediately after Emancipation. By 1870, it was less than 30. Since Blacks were starting from virtually nothing, their wealth rose at a much faster rate than that of Whites.

Large racial disparities in wealth holding began to decline after slavery ended. The decline slowed in the segregation era, accelerated in the civil rights era, and has reversed since the 1980s.

In the last decade of the nineteenth century, the rate of decline in the White to Black wealth ratio slowed. It would take another 50 years for the gap to fall by half again, as the emergence of discriminatory laws and policies curtailed Black social, political, and economic advancement. With unequal pay and limited access to capital, Blacks faced challenges that made it difficult to save, invest, and accumulate wealth.

The researchers estimate that if Whites and Blacks had had equal opportunities for wealth accumulation over the last century and a half, the wealth gap today would be 3 to 1, rather than twice that.

With the migration of Blacks to the North, advances in civil rights, and the dismantling of legal segregation of housing and schools, the pace of racial wealth convergence increased between 1960 and 1980, averaging 1.5 percent per year — five times the 0.3 percent annual average value between 1900 and 1930.

The racial wealth gap has widened in the last four decades. One contributing factor has been the slowdown in the rate of growth of Blacks’ wages. In previous decades, Black wage growth was faster than that for Whites. That has not been the case in recent decades. Another critical factor has been the higher rate of price appreciation on assets owned by Whites relative to Blacks over the last 70 years. Between 1950 and 1980, there was no difference between Blacks and Whites in the accruing rate of capital gains. Since 1980, however, Whites have accrued 0.65 percentage points more per year in gains.

All of these forces affect racial disparities in wealth. Over the 1950–2019 period, housing and other nonfinancial assets accounted for 67 percent of the average Black portfolio, compared with 41 percent for Whites. Corporate stock, held directly or indirectly through mutual funds and retirement accounts, accounted for 7 percent of Blacks’ portfolios, compared with 18 percent for Whites. Since 1950, stock returns have been much greater than the price appreciation of housing. Investments in the stock market have increased in value five times as much as investments in housing, much to the advantage of White households.

During the COVID-19 period, wealth concentration in the US reached its highest level since World War II; the top 0.01 percent of households are estimated to own 36 percent of private wealth. The researchers conclude that “[g]iven that there are so few Black households at the top of the wealth distribution, faster growth in wealth at the top will lead to further increases in racial wealth inequality.”