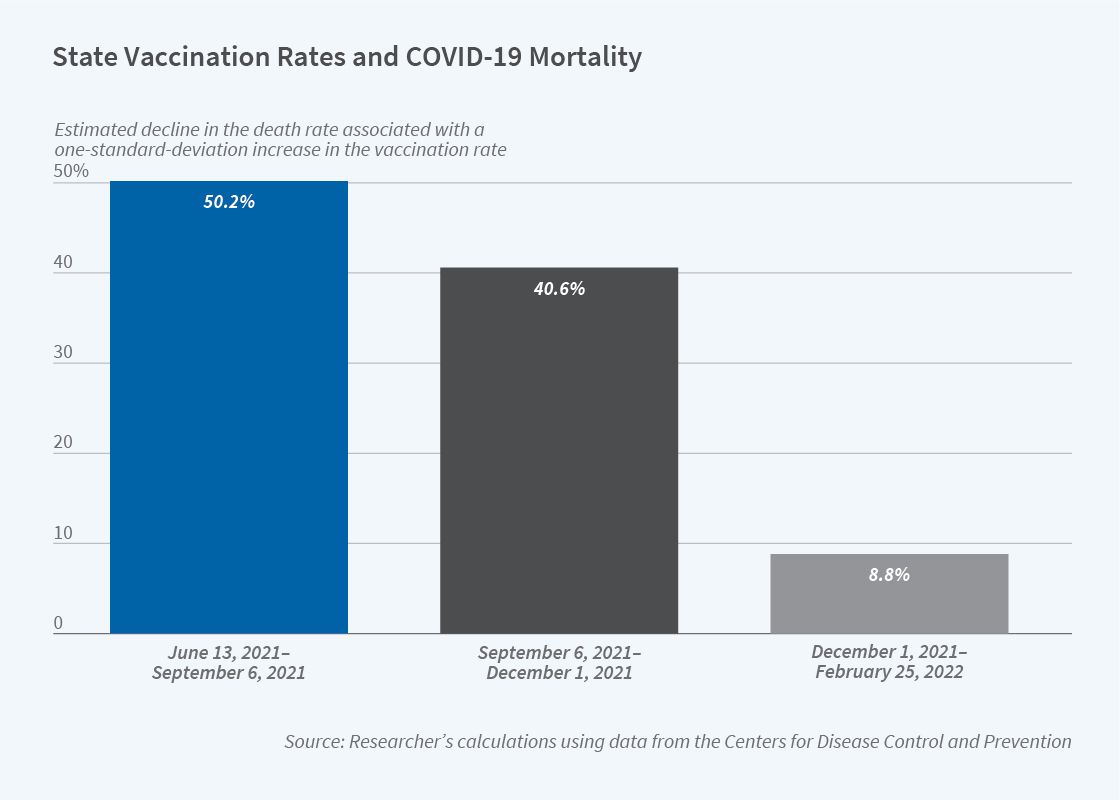 States vary widely in the COVID-19 vaccination rates of their populations, from 48 percent in Alabama to 77 percent in Vermont between November 2021 and February 2022. In Vaccination Rates and COVID Outcomes across US States (NBER Working Paper 29884), Robert J. Barro estimates the effectiveness of vaccines in reducing negative COVID outcomes from this state-level variation. He leverages Centers for Disease Control and Prevention data on vaccination rates, cases, hospitalizations, and deaths over the course of the pandemic.

Barro focuses on four periods of roughly three months each. Rates of full vaccination rose over the periods, but at a declining rate. During the first period, March to May 2021, vaccination rates averaged 24 percent. In the three subsequent periods, roughly June to August 2021, September to November 2021, and November 2021 to February 2022, vaccination rates averaged 45, 55, and 61 percent, respectively. The annualized change in the number of COVID cases per capita increased over time, even though vaccination rates also rose. The mean changes in cases per person were 0.05, 0.08, 0.13, and 0.39 during the four periods. The fourth period coincided with the spread of the Omicron variant. The mean annualized change in per capita deaths due to COVID was 0.0007 in the first period, followed by 0.0006, 0.0017, and 0.0021.

In late 2021, on average one COVID death was avoided for every 124 full vaccination courses that were delivered, implying a cost per life saved of about $55,000.

The research finds that vaccinations were very effective in saving lives. The effect was strongest in the September to November period of 2021, when a 14.2 percent rise in the vaccination rate is estimated to have lowered the death rate by 40.6 percent. It took an average of 124 full vaccinations (248 shots) to save one life at this time. At a full cost for two doses of $222, that implies that the cost of saving one life was around $55,000. The estimated effect of vaccinations on death rates was smaller in magnitude in the other periods. For example, between December 2021 and February 2022, the estimates imply that it took 455 full vaccinations to save one life, and the estimated cost per life saved was $200,000. This is still far below most estimates of the value of a statistical life, which are often several million dollars for the United States.

Barro offers three possible explanations for why the effects of vaccinations on COVID-related deaths, hospitalizations, and cases seem to have weakened over time, particularly in the December 2021 to February 2022 period. First, the efficacy of vaccinations wanes over time, although the analysis tried to hold constant this effect. Second, existing vaccines were likely less effective against new forms of the virus, notably the Omicron variant. And third, the confidence engendered by vaccinations may have led individuals and state governments to relax nonpharmaceutical interventions such as masking and social distancing that were designed to prevent virus spread. The impact of such relaxations may have been reinforced by so-called COVID fatigue, a general decline in self-protective actions taken by many members of the community.