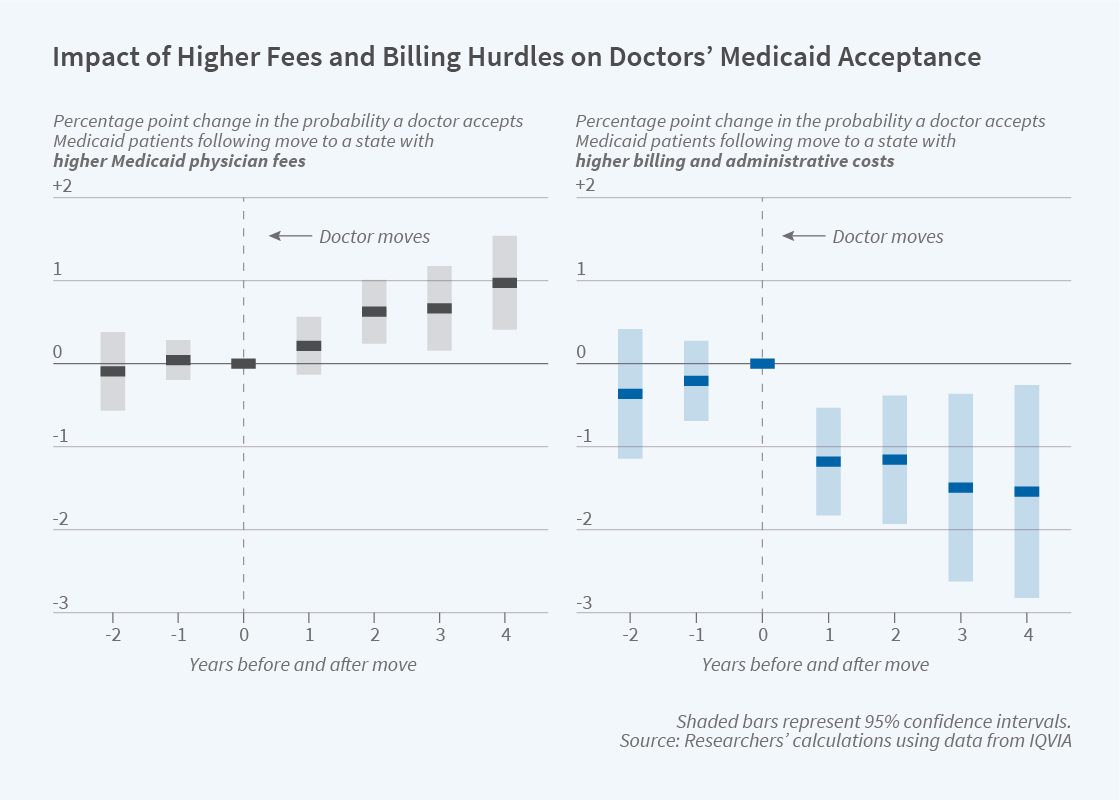 Physicians lose an estimated 17.4 percent of Medicaid claims to billing problems, compared with losses of 4.9 percent for Medicare claims and 2.8 percent for commercial insurance claims.

Low reimbursement rates are not the only reason many providers decline to accept Medicaid patients. Administrative costs and bureaucratic hurdles doctors face in obtaining reimbursement also are significant factors.

In A Denial a Day Keeps the Doctor Away (NBER Working Paper 29010), Abe Dunn, Joshua D. Gottlieb, Adam Shapiro, Daniel J. Sonnenstuhl, and Pietro Tebaldi find that physicians are substantially less likely to be paid by Medicaid and that they lose 17 percent of Medicaid reimbursements to billing problems, more than triple the comparable magnitudes for Medicare or commercial insurer reimbursements.

The study is based on remittance data for 90 million patient visits between 2013 and 2015. The researchers tracked multiple rounds of interactions as insurers and providers jousted over such issues as whether services were justified, properly coded, authorized, and/or duplicative, and whether the patient was eligible for coverage. There are nearly 350 codes that designate reasons that claims can be adjusted or denied.

The researchers construct measures of the “costs of incomplete payments” as a percentage of original claims. The measures combine administrative expenses incurred by resubmitting claims and revenue foregone when claims are abandoned. Resubmission costs vary depending on factors such as the reason for the denial, the type of insurer, the size of the claim, and the state in which the service was performed. Administrative costs were estimated based on the revenue points at which physicians decided claims were not worth pursuing.

In the data sample, the nationwide average loss on a Medicaid claim – the sum of processing costs for the doctor and the risk of having to abandon the claim – is 17.4 percent of the claim’s value. That compares with shortfalls of 4.9 percent for Medicare and 2.8 percent for commercial insurers. In dollar terms, the average loss comes to $12.09 per Medicaid visit, $4.07 per Medicare visit, and $2.69 per visit covered by commercial insurers.

While Medicaid is federally funded, it is administered by the states. States vary in their reimbursement payments and procedures, and thus the bureaucratic burdens they place on providers vary. Incomplete payments range from 25 percent or more of Medicaid claim values in California, Texas, Georgia, Illinois, and Pennsylvania to under 10 percent of claim values in Colorado, Idaho, Washington, and Minnesota.

The researchers employed two strategies to determine how the cost of doing business with Medicaid affects the supply of physician services. In one, they studied the behavior of physicians who moved between states with different payment rates and degrees of billing difficulty. In the other, they compared Medicaid acceptance decisions among physicians who belong to the same medical groups but practice in states with different reimbursement rules.

The conclusion from both strategies was that state-level reimbursement rates and costs of red tape affect provider willingness to accept Medicaid patients. Among the physicians who moved out of state, a 10 percentage point higher rate of incomplete payments in the new state reduced the probability that after the move the doctor accepted Medicaid patients by 1 percentage point. Among the physicians in cross-state medical groups, such a difference in administrative costs correlated with an even greater reluctance to accept Medicaid. The researchers conclude that “while billing hassles could have benefits we don’t measure, they clearly deter physicians from participating in Medicaid.”

A Denial a Day Keeps the Doctor Away