Among Umpires, Calls Improve When the Stakes Are High 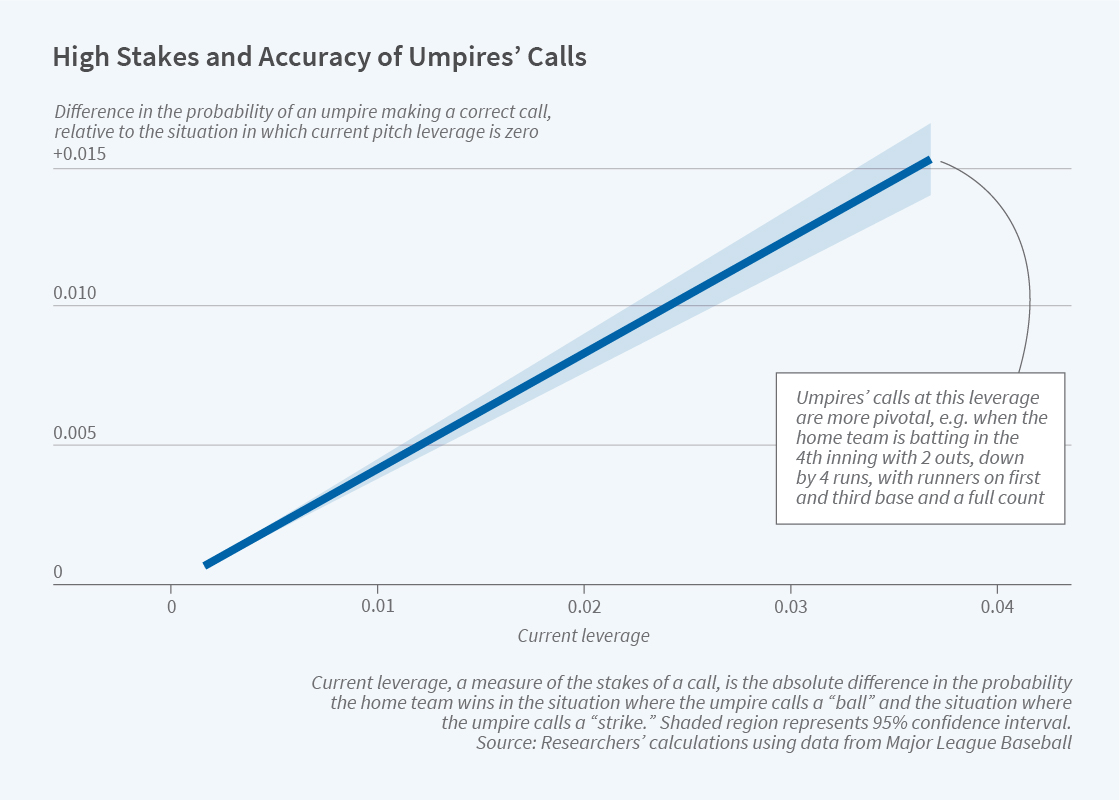 The probability of an accurate ball or strike call rises when the pitch is more likely to affect the outcome of the game. Umpires devote less attention, however, to calls made after or in anticipation of high-stakes decisions.

Do individuals prioritize their limited supply of attention and focus more on important than on less-important decisions? In The Dynamics of Inattention in the (Baseball) Field (NBER Working Paper 28922) James E. Archsmith, Anthony Heyes, Matthew J. Neidell, and Bhaven N. Sampat investigate this question by analyzing the intertemporal, high-stakes decision-making of home plate umpires in Major League Baseball (MLB).

The researchers utilize data on approximately 3.2 million umpire calls during regular innings in 26,523 games over the 2008–18 period. Their study considers camera information that provides a record of the objectively correct calls in each game. They find that umpires not only allocate more attention to high-stakes calls, as indicated by the accuracy of their calls, but also that umpires devote less attention to calls that occur after they have expended a high level of attention on earlier decisions, or before they anticipate having to devote elevated attention to consequential future pitches.

MLB umpires in the researchers’ sample call an average of 120 pitches each game. To measure how pivotal each of these pitches is in influencing the outcome of a game, the researchers estimate the “leverage” of each of the calls: the absolute difference in the probability that the home team wins should the umpire call a strike versus a ball. For example, the call when there are no outs, no balls, two strikes, the bases loaded, and the batting team down by three runs in the top of the 9th inning, would fall in the 99th percentile of the leverage distribution because it has a large potential influence on the outcome of the game.

While leverage can evolve considerably from pitch to pitch, the average impact of the call associated with any single pitch is low, implying that its potential to affect which team wins a game is minimal. The researchers find that an increase in the current leverage of a pitch is associated with an increase in the accuracy of an umpire’s call due to higher attention paid to this high-stakes decision. A one standard deviation increase in the stakes of the call increases the probability of an umpire making the correct call by 0.61 percent.

Increases in past leverage — the sum of the leverage of all previous calls in the present inning — also decrease the accuracy of an umpire’s contemporaneous calls. A one standard deviation increase in past leverage reduces the probability of an umpire calling a pitch correctly by 0.32 percent. This is consistent with umpires having an exhaustible supply of attention, with the attention applied to a particular decision decreasing the availability of attention for succeeding pitches. Breaks between every half-inning appear to allow umpires to regain their attention reserves, since higher leverage in preceding innings has no sizeable effect on umpires’ attention to current calls.

Allocation of attention is also shaped by expectations about the future. Expected future leverage — the sum of expected leverage of future pitches in the current inning — decreases the accuracy of an umpire’s contemporaneous calls. An increase of one standard deviation in expected future leverage decreases the probability of an umpire’s correct call by 0.49 percent, consistent with umpires maintaining their limited attention stock by paying less attention to current calls when they anticipate higher-stakes pitches later in the inning.

The Dynamics of Inattention in the (Baseball) Field