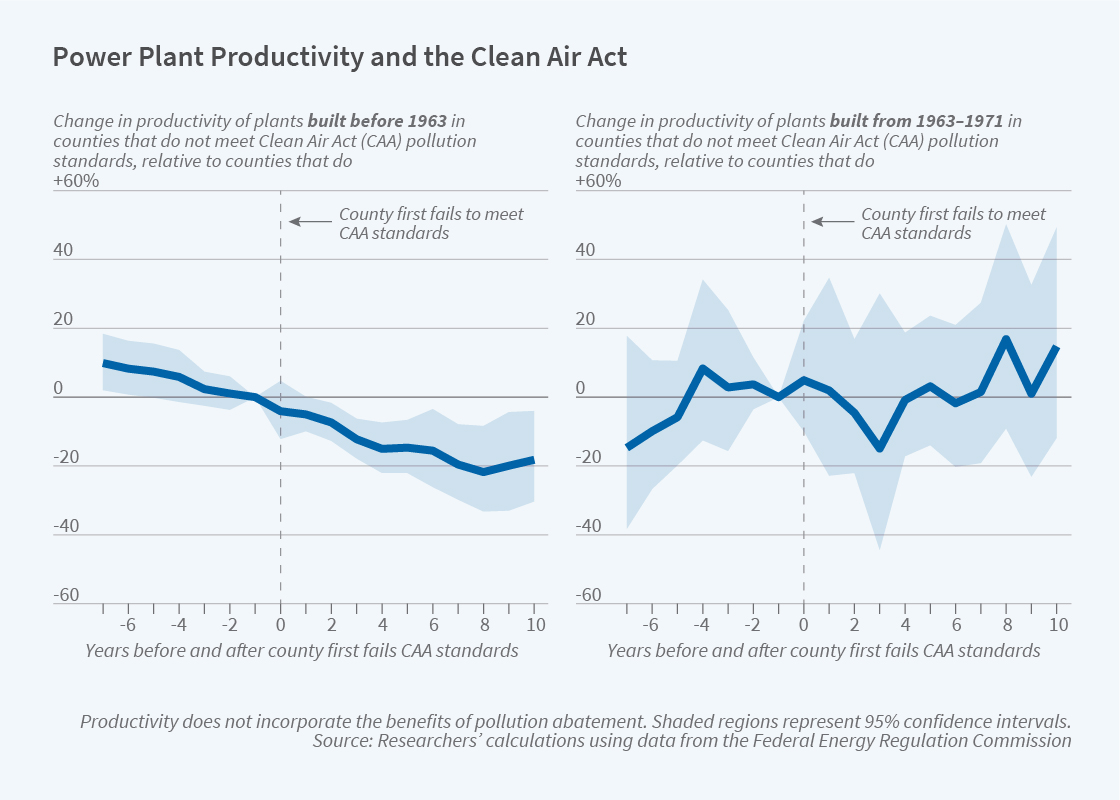 Well before the legislation was passed, the industry began revamping plans for new construction and developing innovative abatement technology.

The landmark Clean Air Act of 1970 did not take effect until 1972, but the electric power industry began taking steps to reduce pollution from power generation a decade earlier.

In Impacts of the Clean Air Act on the Power Sector from 1938–1994: Anticipation and Adaptation (NBER Working Paper 28962), Karen Clay, Akshaya Jha, Joshua A. Lewis, and Edson R. Severnini show that electric utilities began incorporating abatement measures in their construction plans for fossil fuel plants as early as 1963, when Congress passed legislation authorizing the federal government to control air pollution.

The researchers study data spanning the 1938–94 period to assess the impact of the Clean Air Act (CAA) on power plant output and productivity. They analyze nearly every fossil-fuel plant in the nation and capture both preemptive and reactive responses to the CAA.

To arrive at their estimates, they exploit a provision of the law that divided counties into two categories — attainment and nonattainment — depending on whether their air pollution levels fell below or above federal thresholds. Starting in 1972, plants in nonattainment counties faced much more stringent regulation than those in attainment counties. They had to switch to more expensive, low-sulfur coal, install abatement equipment, or decrease output to comply with the rules.

The Clean Air Act resulted in productivity losses at power plants in nonattainment counties, compared with their counterparts in less-regulated counties, but only for plants built before 1963. By contrast, the impact of the CAA was statistically insignificant on plants that opened from 1963 to 1971. Overall, the CAA led to average annual productivity losses of $3.5 billion, measured in 2020 dollars, over the 1972–94 period. The losses were greatest in the years soon after the regulatory changes.

The researchers suggest that electric utilities viewed the 1963 clean air legislation as a precursor of much stricter regulation to come. In response, they revamped plans for new construction, raising the height of smokestacks to increase dispersion of pollutants, installing electrostatic precipitators to remove harmful particulates, and developing innovative abatement technology, which is reflected in a surge of patents over the remainder of the decade.

Utilities did relatively little to retrofit older plants. They chose instead to decrease the output of those plants and, when possible, to shift production to newer plants. Such reallocation offset roughly half the aggregate losses from the CAA regulations.

Impacts of the Clean Air Act on the Power Sector from 1938-1994: Anticipation and Adaptation