The Rise of High-Skilled Workers as ‘Human Capitalists’ 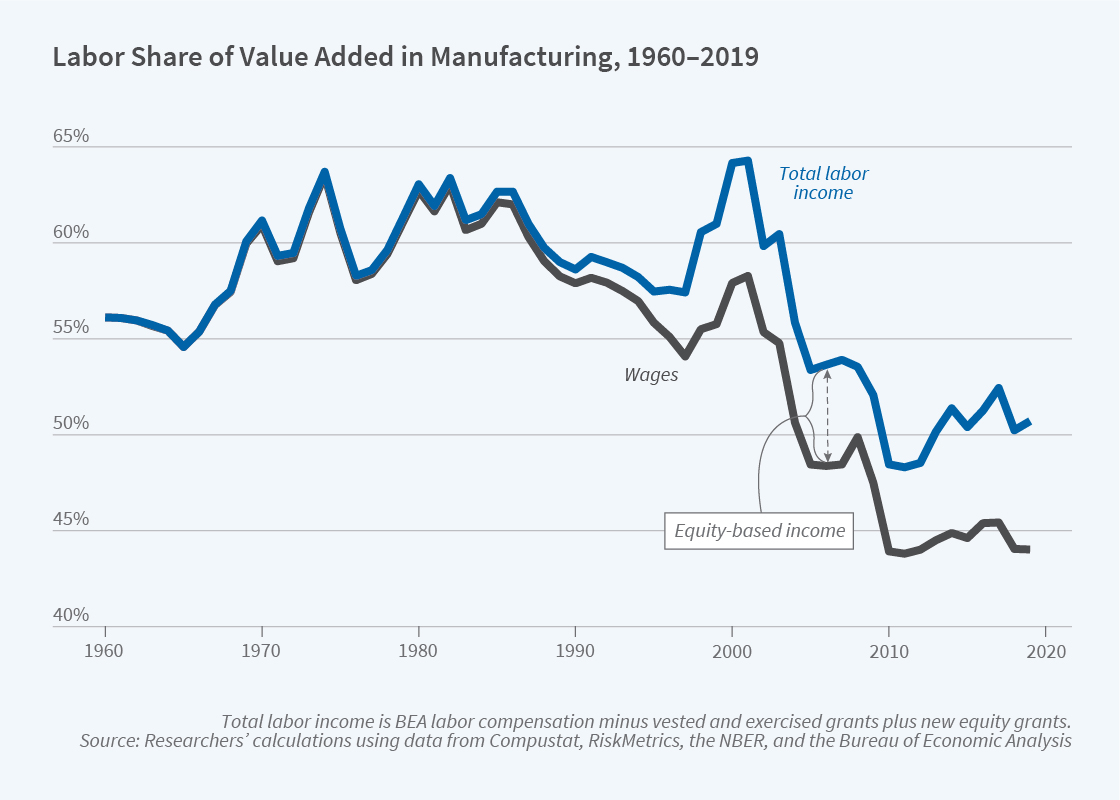 Labor’s share of corporate earnings has shrunk in recent decades, but when equity-based payments are included in compensation, the decline for high-skill workers is almost entirely eliminated.

Standard estimates of the recent decline in labor’s share of national income are likely to overstate the drop by failing to account for a large fraction of compensation in the form of equity grants and stock options. In Human Capitalists (NBER Working Paper 28815), Andrea L. Eisfeldt, Antonio Falato, and Mindy Z. Xiaolan report on a new class of high-skilled workers who, since the 1980s, have seen equity-based compensation increase to 40 percent of their earnings. The researchers estimate that equity compensation now constitutes 7 percent of corporate value-added, up from under 1 percent in 1980.

Even after equity-based compensation is factored in, labor’s share of corporate earnings has shrunk in recent decades. But the gap is far more evident among lower-skilled, wage-dependent workers. Augmented by stock options, capital gains, and dividends, the high-skill share of total labor income increased from 46 percent at the start of the 1980s to 58 percent today while the employment share of high-skilled workers remained flat at 30 percent.

The increased prevalence of equity-based compensation has been a win-win for high-skill employees and their employers. These workers benefit from lower tax rates on capital gains after exercising stock options, and firms use the prospect of stock grants as an incentive for retaining prized employees. Further, substituting equity pay for wages historically reduced reported labor costs and boosted annual earnings. The researchers estimate that 91 percent of equity pay has been used to replace wages rather than as compensation for increased productivity.

Standard data sources, such as the Bureau of Labor Statistics, do not capture the majority of equity pay, much of which is taxed as long-term capital gains, not as ordinary income. Additionally, since stock options are not exercised immediately, they often do not show up in income data for the year in which they were granted.

The researchers overcome the measurement hurdles by mining Securities and Exchange Commission filings on shares reserved for compensation reported by a broad range of firms in the manufacturing, health, consumer goods, and high-tech sectors from 1960 to 2019.

Their compensation calculations show that the greatest earnings gains go to human capitalists working in sectors that have experienced the largest declines in prices of investment goods. For example, as firms purchase cheaper and more powerful computers, they increase the productivity of high-skill workers. That complementary relationship between high-tech investment and high-skilled workers is not evident when wages alone are counted. By contrast, capital goods investment is negatively correlated with wage-based, low-skilled workers, reflecting the substitution of machines for people.

While total compensation at the C-suite level appears to have peaked around the year 2000, the researchers find, equity-based compensation to a broader set of high-skilled labor continues to rise.