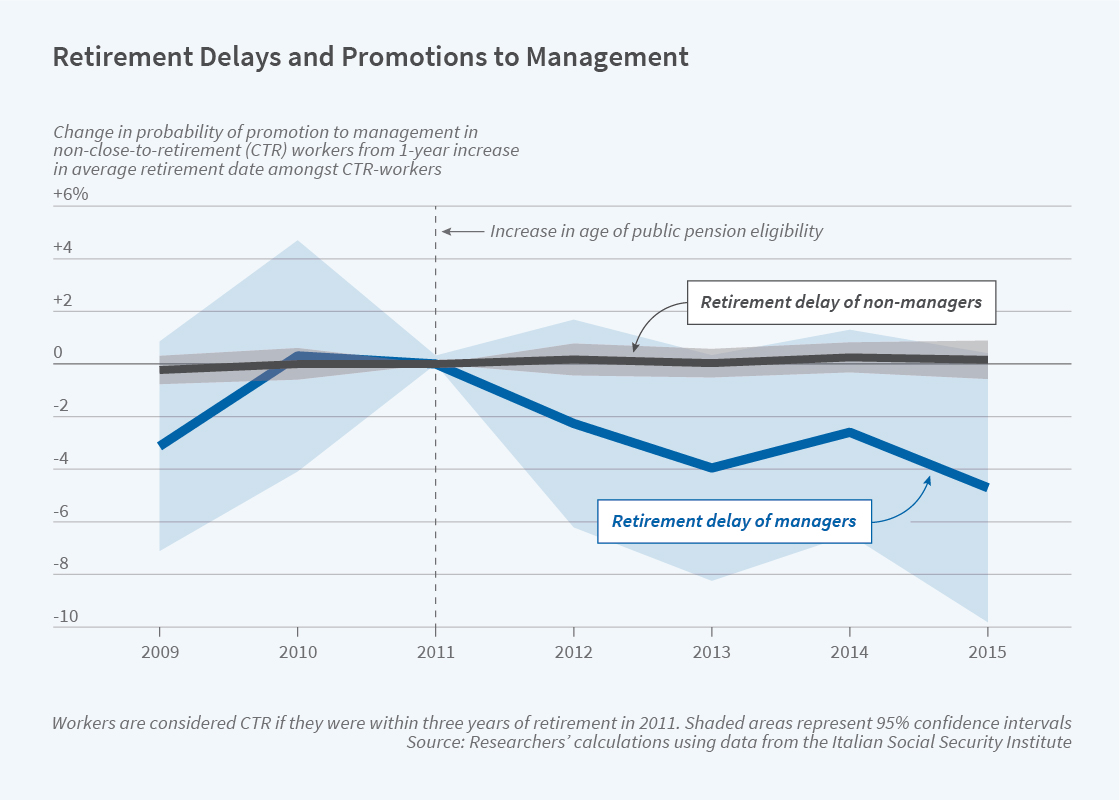 A one-year increase in the average retirement age of workers who are close to retirement reduces the wage growth of younger coworkers by 2.5 percent per year.

The retirement decisions of older workers can influence the earnings growth rate and promotion rate of younger workers, especially in firms where promotion opportunities are more limited. These effects are the focus of Career Spillovers in Internal Labor Markets (NBER Working Paper 28605), by Nicola Bianchi, Giulia Bovini, Jin Li, Matteo Paradisi, and Michael L. Powell. The study examines the role of within-firm factors, such as the retirement decisions of coworkers, in contributing to career dynamics.

The researchers exploit a 2011 Italian pension reform — the Fornero reform — that unexpectedly tightened eligibility criteria for public pensions, leading to sudden and widespread retirement delays by many retirement-age workers. Using administrative data on Italian private-sector workers provided by the Italian Social Security Institute (INPS), they compare the wage growth and internal promotions of younger workers before and after the reform, and relate these outcomes to the age composition of their firm’s workforce.

These wage and promotion rate effects are most pronounced at firms with limited workforce flexibility, such as those with a larger share of workers close to retirement, firms that are shrinking, and firms with few highly paid positions. Retirement delays have a larger impact — more than four times larger than the average effect — on the wages of coworkers who are 55 years old or older. The researchers note that this may reflect firms’ use of seniority as a criterion for promotion.

The researchers did not find any evidence that younger workers respond to delayed retirement of their older coworkers by quitting. They did find, however, that a one-year increase in retirement age increases layoffs by about 10 percent, and reduces hiring by 2 percent.