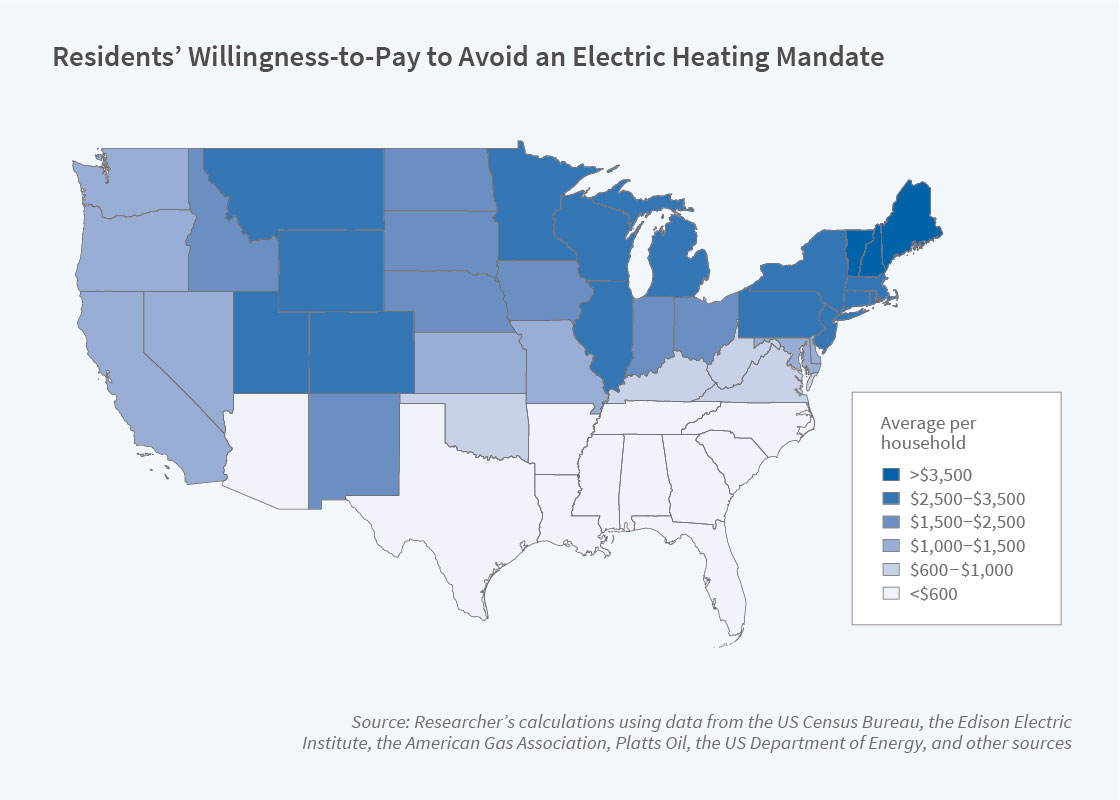 While the cost of mandating use of electric heating in new homes in Florida would average only $85 a year, in some Northern states it could top $4,000.

The share of American homes heated with electricity was only 1 percent in 1950 but has increased steadily to 39 percent in 2018. In What Matters for Electrification? Evidence from 70 Years of US Home Heating Choices (NBER Working Paper 28324), Lucas W. Davis investigates the key determinants of this increase using data on heating choices from millions of US households.

The study finds that changing energy prices is by far the most important factor, explaining more than 70 percent of the increased use of electric heat over this period. Adjusted for inflation, average residential electric rates have fallen 58 percent over the past seven decades while natural gas rates have risen 27 percent and heating oil prices 79 percent. In the 1950s, the early movement to electrify space heating was led by four states — Washington, Oregon, Nevada, and Tennessee — that could tap cheap electricity generated by the federally owned Bonneville Power Administration and Tennessee Valley Authority.

Geography is also a key factor, accounting for 11 percent of the historical growth. Homeowners in warmer states often prefer electric heating because the capital costs are lower, and a rising share of housing construction is taking place in those warmer states. More than half of the homes in the Southeast, and 90 percent of the homes in Florida, now use electric heat.

The paper then uses these data and framework to estimate household willingness-to-pay to avoid an electrification mandate. More than 30 cities in California have limited or prohibited natural gas in new homes, and cities in Massachusetts, New York, Rhode Island, and Washington have reworked building codes to encourage new homes to incorporate electric heat.

The study finds that the cost of an electrification mandate for new homes varies across places. In warm states, households are close to indifferent between electric and natural gas heating, so the cost of an electrification mandate would average less than $500 a year per household. In Florida, it would average just $85 a year. In the Northeast, however, it would be more costly, especially in Massachusetts, which had some of the most expensive electricity in the nation. In New England’s coldest states — Maine, Vermont, and New Hampshire — the average cost of switching to electricity for new homes would be more than $4,000 a year.

What Matters for Electrification? Evidence from 70 Years of U.S. Home Heating Choices