Survival Pessimism and the Limited Demand for Annuities 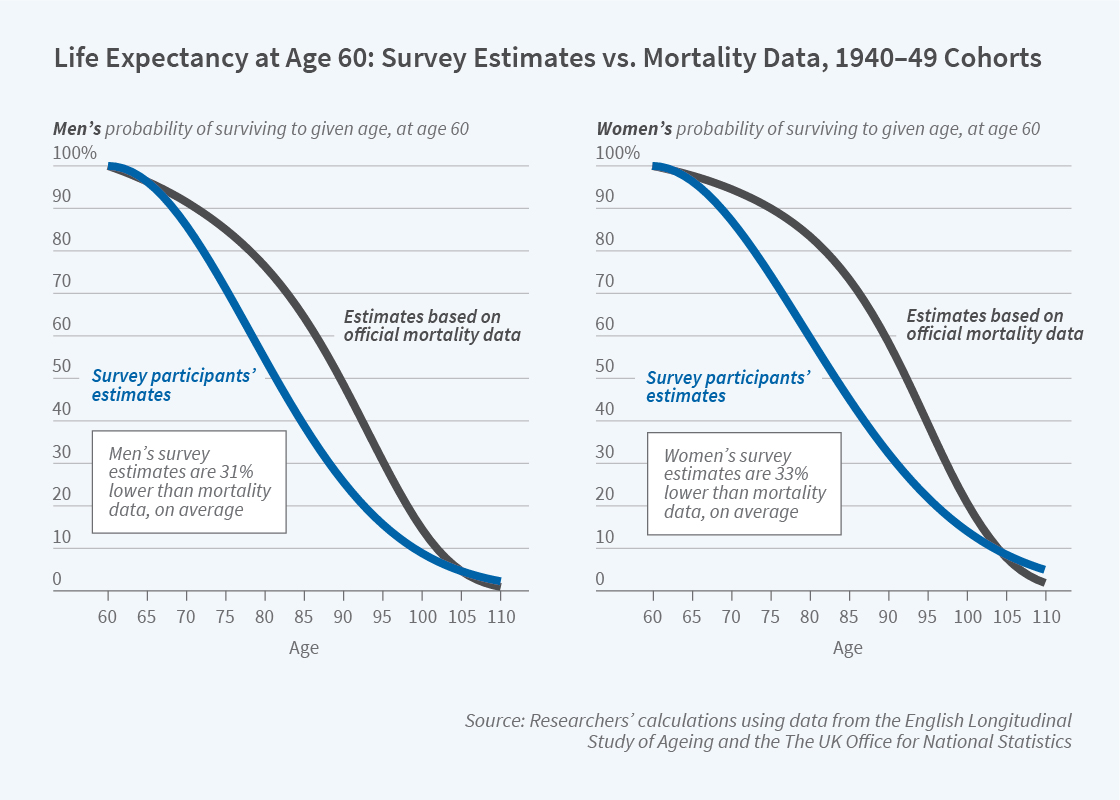 Survey data from England show individuals in their 60s and 70s underestimate their likelihood of living to old ages, which could account for limited annuity demand.

On reaching retirement, individuals must decide how best to use their savings to provide for the remaining years of their lives. This problem is complicated in part because they do not know to what age they will live. Buying an annuity provides insurance against the possibility of living a longer-than-expected life by converting wealth into an income stream that is guaranteed until death. This feature notwithstanding, relatively few retirees buy annuities.

One possible explanation for this low demand is that individuals underestimate how long they will live. In Survival Pessimism and the Demand for Annuities (NBER Working Paper 27677), Cormac O’Dea and David Sturrock examine how this phenomenon influences annuity demand.

The researchers begin by measuring the extent of “survival pessimism,” the tendency to underestimate longevity. They use data from the English Longitudinal Study of Ageing, a biennial survey of English households over the age of 50. They combine survey data in which individuals are asked about their expected lifespans with mortality data that reveal actual lifespans. They find that, on average, individuals underestimate their lifespan during their 50s, 60s, and 70s. Those in their early 60s under-estimate the likelihood that they will survive to age 75 by more than 25 percentage points, on average, and those in their early 70s underestimate survival to age 85 by more than 15 percentage points. In contrast, they overestimate it during their late 80s and beyond.

Since annuities are priced according to insurers’ observations of actual longevity, survival pessimism can explain why annuities, to many individuals, appear to offer poor value: they do not expect to live as long as insurers think they will. The researchers estimate that 88 percent of individuals would view as unfairly priced an annuity that is in fact priced fairly for someone of their age, sex, and year of birth.

Depending on their attitude toward risk, however, even survival pessimists may still buy annuities they regard as overpriced rather than stay uninsured. The researchers apply a lifecycle model that accounts for individuals’ patience and their attitude to risk to estimate the demand for annuities. In their model, individuals who do not discount the future at all would all purchase annuities if they had correct information about their lifespan. When they base their decisions on expected lifespans, recognizing survival pessimism, however, the rate of annuitization falls to values between 42 and 64 percent depending on risk aversion. For individuals with positive discount rates toward the future, the level of desired annuitization is lower, but the drop in annuity demand from survival pessimism is still substantial.

The researchers note that another explanation for low annuity demand is that these products offer low payouts because of market imperfections such as adverse selection in the pool of annuity buyers. They estimate that the impact of survival pessimism on the demand for annuities is comparable to the impact of offering payouts that are 82 percent of the actuarially fair payout using population mortality rates. The effect of individuals underestimating their lifespans may therefore be comparable to the effect of these market imperfections.

Survival Pessimism and the Demand for Annuities