Workers approaching retirement are increasingly likely to have accumulated balances in a defined contribution (DC) pension plan, the result of a now decades-long shift in employer-sponsored pensions towards DC plans. Workers must decide how to use these balances during retirement, including how quickly to withdraw assets from their accounts and whether to purchase a life-contingent annuity that will provide a stream of income for as long as they live. 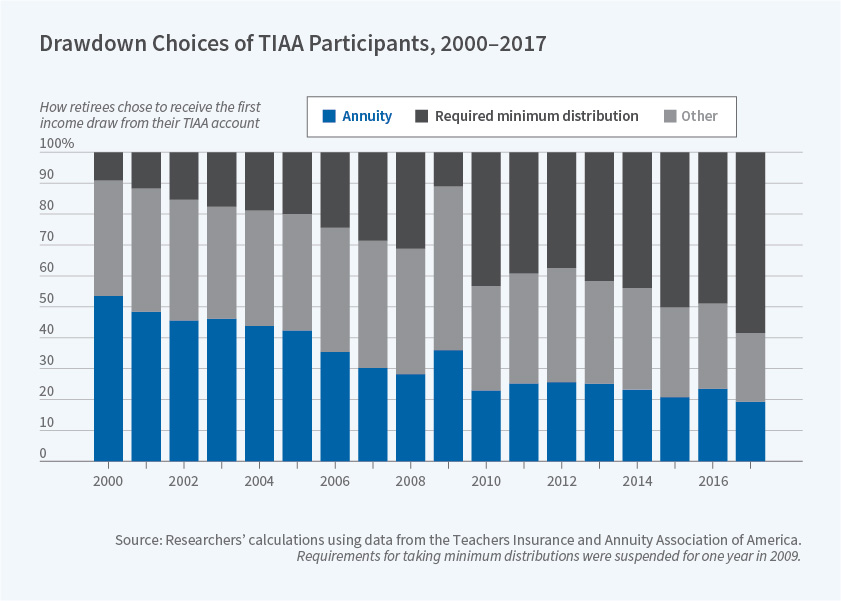 The withdrawal options available to DC plan participants are determined by the plan. Annuity options – such as a single-life annuity that pays benefits for the duration of the worker's life or a joint-life annuity that pays benefits as long as either the worker or the worker's spouse is alive – may or may not be available. The IRS' required minimum distribution (RMD) regulations require all plan participants to begin making withdrawals by age 70½. For many participants, the withdrawal process is a sequence of decisions spread across many years, rather than a single payout decision at the time of retirement.

The authors track withdrawal behavior over the period 2000 to 2017 using administrative data from TIAA, which serves the higher education and non-profit sectors and is one of the largest DC retirement plan providers in the US. The authors focus on the first retirement income draws of about 250,000 individuals over the age of 60 who "retired" during this period. "Retirement" is defined as the date when contributions to the TIAA account stopped; most of the individuals in this situation probably left the labor force. The choices available to TIAA participants include single and joint life annuities, guaranteed payments for a fixed period, periodic payments that can be changed or stopped at the participant's request, interest-only payouts, and RMD payouts. Prior to 1989, most TIAA participants were required to purchase an annuity.

Next, the authors explore factors that may have contributed to declining annuitization. The first is changes in the nominal interest rate, which directly affects the amount of monthly income that an annuity can provide for a given account balance. The nominal interest rate on 10-year Treasury bonds fell from 6.0 percent in 2000 to 4.6 percent in 2007 to a low of 1.8 percent in 2012, and annuity payouts per premium dollar declined with this rate. The authors estimate a model of annuity demand that controls for individual characteristics such as age, gender, years in the TIAA system, and account balance. They find that a one percentage-point decline in the nominal interest rate is associated with a five percentage-point decline in the probability of annuitization. This suggests that the changes in the interest rate observed over the 2000 to 2017 period could account for more than half of the decrease in annuitization.

In sum, the authors find that over the past two decades, TIAA participants who are given the option to annuitize account balances have become substantially less likely to select this option and more likely to choose payments that satisfy the RMD requirements. Declining nominal interest rates and rising age at first withdrawal appear related to this shift. The authors conclude, "the decision not to annuitize does not mean that an individual will exhaust their resources if they live an unexpectedly long life, and it does not imply a failure of consumer optimization... The decision not to annuitize, however, may have implications for the time path of post-retirement consumption, and it may in particular lead retirees to reduce their spending in the early years of retirement to preserve a savings cushion for later years."

The research reported in this paper was performed pursuant to grant RDR-18000003 from the U.S. Social Security Administration (SSA) funded as part of the Retirement and Disability Research Consortium. The findings and conclusions expressed are solely those of the author(s) and do not represent the views of SSA, any agency of the Federal Government, or the NBER.