The Timing of Pension Payouts and Social Security Claiming 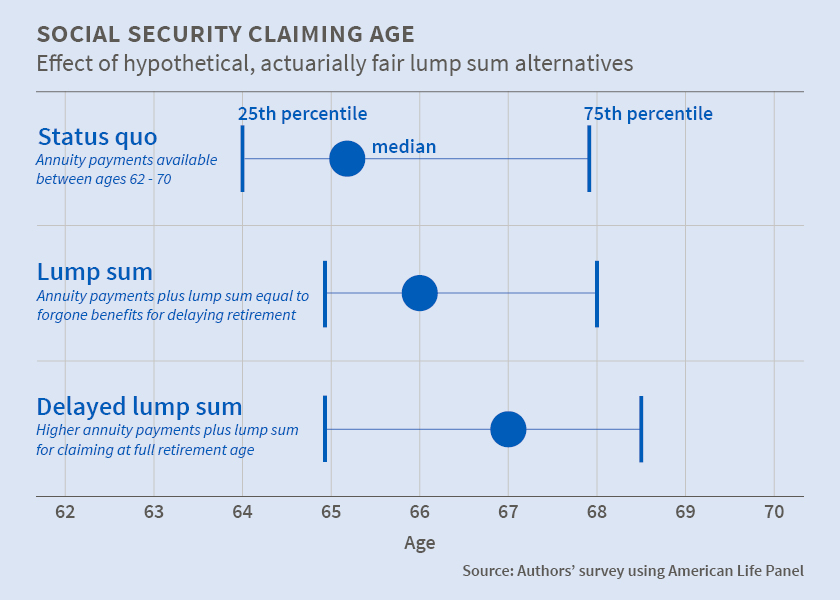 As the U.S. population ages and people spend more years in retirement, the issue of when to begin collecting payouts from retirement plans, and in what form to take them, has attracted growing attention from both retirees and policymakers. Two NBER working papers tackle this financially thorny issue, one looking at private retirement plans and the other at the public Social Security program. These studies explore how changes to distribution and vesting rules could affect retirees as well as the federal budget.

In Do Required Minimum Distributions Matter? The Effect of the 2009 Holiday On Retirement Plan Distributions (NBER Working Paper No. 20464), authors Jeffrey R. Brown, James Poterba, and David Richardson examine the one-time "holiday" suspension of "Required Minimum Distribution" (RMD) rules. In early 2009, Congress passed legislation that allowed private savings-plan participants to skip required payouts from their retirement plans for that year, in part to allow them to begin rebuilding their nest eggs after losses in account values that were triggered by falling asset prices during the financial crisis. Specifically, the authors looked at the actions of tens of thousands of 403(b) retirement-plan participants at TIAA-CREF, a large retirement-services provider that has historically primarily served employees at colleges, universities, and other nonprofit institutions. They also surveyed thousands of plan participants to gauge their motives for decisions related to the one-year suspension of otherwise mandatory distribution rules for tax-qualified savings plans.

The authors found that about one-third of participants who were taking required distributions in 2008 chose to suspend their payouts in 2009. This group appears to take distributions only because of the federal government�s mandatory RMD rules. But the response was not uniform among participants. Younger and wealthier savings-plan participants were more likely to suspend distributions, figuring they didn�t need the money for immediate consumption needs and preferring instead to let their investments grow tax-free. Twenty-five percent of those with savings plan balances of less than $50,000 suspended distributions, while the suspension rate was 40 percent for those with accounts valued at $250,000 or more.

In Will They Take the Money and Work? An Empirical Analysis of People's Willingness to Delay Claiming Social Security Benefits for a Lump Sum (NBER Working Paper No. 20614), authors Raimond Maurer, Olivia S. Mitchell, Ralph Rogalla, and Tatjana Schimetschek explore whether lump-sum payments to potential Social Security recipients might induce them to begin drawing regular monthly payouts at a later age and to work additional years.

The authors surveyed participants in the RAND American Life Panel data, and focus their analysis on the 2,400 respondents between the ages of 40 and 70. They presented the survey participants with various financial scenarios and attempted to gauge how they might react to different financial incentives, including getting actuarially fair lump-sum payments if they delayed claims for monthly Social Security checks when they hit various program retirement ages. Currently, delayed claiming leads to an increase in lifetime annuity benefits when the claimant begins to receive benefits.

The findings of both studies may inform policy discussions about how the structure of both private and public retirement programs affect private saving for retirement and the length of working careers.