The 21st Annual Meeting of the Retirement and Disability Research Consortium 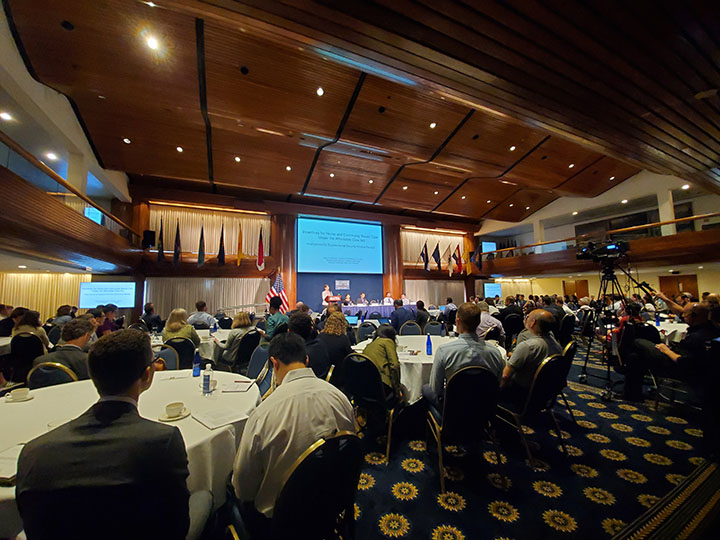 In his opening remarks, Mark J. Warshawsky, Deputy Commissioner of Retirement and Disability Policy at SSA, highlighted a 2018 paper previously funded through the NBER DRC for its policy relevance. In “Early Determinants of Work Disability in an International Perspective” (NBER Working Paper No. 25142) NBER Research Associate Axel H. Börsch-Supan and co-authors Tabea Bucher-Koenen and Felizia Hanemann examine the roles of health and welfare policies in individuals’ decisions to take up disability insurance (DI) benefits, concluding that most of the variation in DI uptake between countries is explained by differences in DI policies. More generally, Deputy Commissioner Warshawsky noted that the SSA holds the “RDRC research in very high regard and strongly consider it when [they] devise, develop, and later test policy changes and innovations.”

The meeting was organized around thematic panels and featured research funded through the NBER RDRC as well as the other RDRC centers, which are based at Boston College, the University of Michigan, and the University of Wisconsin.

In Panel 1: Trends, Informing Long-Term Forecasts, NBER Research Associate Richard Frank presented “Changing Labor Markets and Mental Illness: Impacts on Work and Disability,” co-authored with Sherry Glied and Keith Marple. The researchers document the labor force participation decline of individuals with mental illnesses over the period 1997–2017. This trend has been driven in part by an increasing prevalence of mental illness in combination with a growing demand for jobs that require non-routine skills, in which individuals with psychological distress are underrepresented.

In Panel 2: Program and Policy Interactions and Incentives, Gina Li presented “The Effect of the Delayed Retirement Credit on Social Security,” co-authored with NBER Research Associate Mark Duggan, Irena Dushi, and Sookyo Jeong. The researchers investigate how changes in the delayed retirement credit (DRC) affect the timing of benefit claiming. Although the change in the DRC increased workers’ incentives to delay claiming after the full retirement age, the researchers find little change in behavior, suggesting that workers do not focus on the present value of benefits when deciding when to claim.

In Panel 3: Measurement of Well-Being in Retirement, NBER RDRC Scientific Advisor James J. Choi presented “Trends in Retirement Income Adequacy: Evidence from IRS Tax Data,” co-authored with Shanthi Ramnath and NBER Research Associates John Beshears and David Laibson. The researchers examine trends in retirement income across the 1930­­­–41 birth cohorts using IRS tax data.  They find that income replacement rates in retirement have not worsened over time for households at or above the median income level, but have deteriorated for households below the median, while the percent of households that are totally dependent on Social Security income has trended upwards.

In Panel 4: International Data, NBER RDRC Co-Director Courtney Coile presented “The Changing Nature of Work and Public Pension Coverage: Evidence from the United States and Europe,” co-authored with NBER Research Associate Axel Börsch-Supan, Carl Emmerson, and Yuri Pettinicchi. The researchers document that the share of workers engaged in nonstandard work in the US, the UK, and Germany has changed only modestly over time, contrary to popular belief. The study also shows that workers who spend much of their career in self-employment have higher levels of financial distress in retirement.

Also in Panel 4, NBER Research Associate Jonathan Gruber presented “The Effect of Relabeling and Incentives on Retirement: Evidence from a Pension Reform,” co-authored with Ohto Kanninen. The researchers examine a reform in Finland which relabeled public pension retirement ages without changing financial incentives and find that relabeling the early retirement age as a “normal” retirement age substantially increased early retirement. The study presents suggestive evidence that those who retired early due to relabeling came to regret their decision and in some cases returned to work.

In Panel 7: Opioids, Work Capacity, NBER RDRC affiliate David Powell presented “Is the Rise in Illicit Opioids Affecting Labor Supply and Disability Claiming Rates?,” co-authored with Sujeong Park. The researchers study the effects of the 2010–11 abuse-deterrent reformulation of OxyContin as a primary driver of the transition from traditional prescription opioids to the likes of heroin and fentanyl. They find that the transition to heroin and fentanyl had little effect on traditional labor supply measures, but did lead to significant increases in disability benefit applications.

Also in Panel 7, NBER RDRC affiliate Kathleen Mullen presented “Latent Work Capacity and Retirement Expectations,” co-authored with Italo Lopez Garcia and Nicole Maestas. The researchers developed a method to measure individuals’ latent capacity to work using self-reported ratings of their cognitive and physical abilities. This metric of work capacity, which correlates with self-reported work-limiting health problems and declines with age, may be predictive of both current and future labor supply.

Summaries of conference papers are available at
https://mrdrc.isr.umich.edu/publication_types/conference-papers/

Early Determinants of Work Disability in an International Perspective