Projecting Changes in the US Labor Force 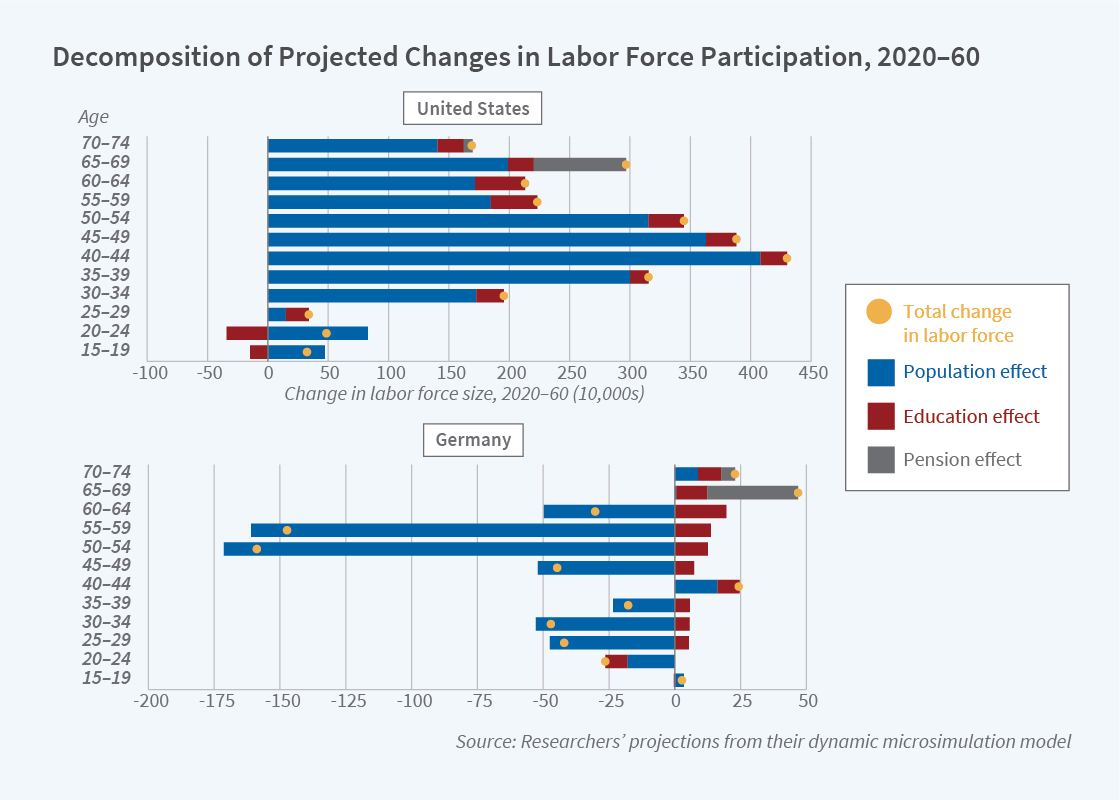 Population aging in the US and other developed countries presents a challenge for future economic growth and the sustainability of public programs. Yet tax revenues and government expenditures depend not only on the age composition of the population but also on the size of the labor force. Rising labor market participation rates may compensate for a smaller working-age population. Projections of labor force participation are therefore crucial for the assessment of future revenues and costs of social security systems.

Researchers René Böheim, Thomas Horvath, Thomas Leoni, and Martin Spielauer explore this subject in their study The Impact of Health and Education on Labor Force Participation in Aging Societies — Projections for the United States and Germany from a Dynamic Microsimulation (NBER Working Paper 29534). Using a highly stylized dynamic microsimulation model, the authors project the US labor force up to the year 2060. They contrast these results with projections for Germany, which is the largest European economy but has experienced different demographic and labor force participation trends as well as more substantive reforms to its public pension system.

The model the authors develop is an adaptable and portable tool that can be applied in different country contexts. The model begins with a starting population representative of the country’s population. The model then simulates education, marriage, fertility, migration, labor force participation, health, and mortality outcomes in this population; each outcome can affect others and the model is calibrated to reproduce existing aggregate population projections for several key outcomes.

In the baseline simulation, the labor force of the US is projected to grow by 16.2 percent between 2020 and 2060, or about 25.2 million workers. This growth can be traced to changes in the size and age structure of the population and in educational attainment, as well as the impact of pension reforms. Population growth is the most important factor — it is projected to add about 24 million workers to the labor force, with increases in the size of the labor force in all age groups, particularly above age 30.

Increases in educational attainment are projected to add about 2 million persons to the workforce. While more educated workers work less at younger ages while they are pursuing their education, they work at higher rates at other ages. Finally, the gradual increase in the full retirement age from 66 years and 2 months for those born in 1955 to 67 for those born in 1960 or later is projected to add 800,000 workers to the labor force.

Results for Germany are markedly different. The labor force in Germany is projected to decline by 10.7 percent, or 4.4 million workers, between 2020 and 2060. Demographic change reduces the size of the labor force in virtually all age groups, with a particularly large effect for the age group 50 to 59. The effects of rising education and pension reforms work in the opposite direction, adding 500,000 and 400,000 workers to the German labor force, respectively.

Finally, the authors use their model to simulate the effect of several “what-if” scenarios that would alter the educational attainment or health of the population in the US. A reform that moved one-quarter of the people in each education group up to the next group would increase the labor force by nearly 1 million workers by 2060. Extending the analysis window to 2080 more than triples the effect of this reform, as increases in educational attainment have particularly substantial effects at the end of working careers when labor force participation is lowest, and thus take time to materialize.

Another simulation projects the impact of narrowing gaps in labor force participation rates by health to the level currently seen in Sweden, a model for the labor market integration of working-age persons in poor health. This change would increase the size of the labor force by 6.6 percent, or 14.9 million persons, by 2060. The findings “highlight that improvements in the labor market integration of people with health limitations provide a particularly promising avenue to increase labor force participation and thus cushion the negative economic effects of demographic aging.”

The research reported herein was performed pursuant to grant RDR18000003 from the US Social Security Administration funded as part of the Retirement and Disability Research Consortium. The opinions and conclusions expressed are solely those of the author(s) and do not represent the opinions or policy of SSA, any agency of the Federal Government, or NBER. Neither the United States Government nor any agency thereof, nor any of their employees, makes any warranty, express or implied, or assumes any legal liability or responsibility for the accuracy, completeness, or usefulness of the contents of this report. Reference herein to any specific commercial product, process or service by trade name, trademark, manufacturer, or otherwise does not necessarily constitute or imply endorsement, recommendation or favoring by the United States Government or any agency thereof.