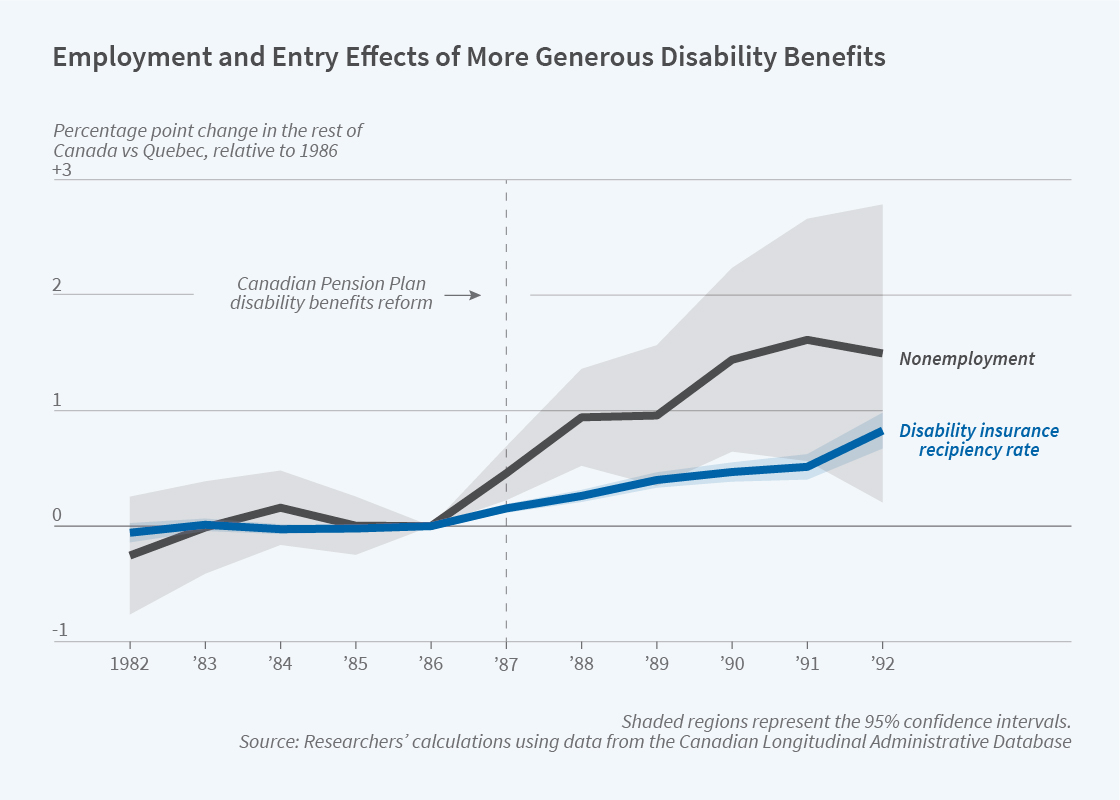 Increases in the share of the working age population receiving Disability Insurance (DI) benefits in the US and other industrialized countries in recent decades have sparked discussions on the long-term financial stability of DI programs. Various policy instruments have been discussed as a means of limiting the expansion of DI programs, including reducing incentives to seek benefits, providing incentives to return to work, and adopting more rigorous eligibility standards.

International evidence on the effect of DI program provisions on the use of DI programs may be instructive, particularly where there are no similar recent reforms in the US. In Induced Entry in Disability Insurance: Evidence from Canada (RDRC Working Paper NB20-08), researchers Giacomin Favre, Andreas Haller, and Stefan Staubli examine the effects of two Canadian DI reforms that affected DI benefit generosity and work incentives for DI recipients.

One unique feature of the Canadian DI system is that there are two separate DI programs, the Quebec Pension Plan (QPP-D), which covers residents in the province of Quebec, and the Canadian Pension Plan (CPP-D), which covers residents in the rest of Canada. The reforms examined in the study altered program provisions in the CPP-D but not in the QPP-D, enabling the authors to estimate their effect by comparing the change over time in DI use in the rest of Canada vs. in Quebec. The analysis is conducted using administrative records for 20 percent of Canadian tax filers for a period of five years before and after each reform.

The first reform, enacted in 1987, raised the benefit in the CPP-D to match that in the QPP-D, resulting in a benefit increase of 300 Canadian dollars (CAD) per month, or nearly 40 percent relative to the average pre-reform benefit. The reform also reduced the number of years of recent payroll tax contributions required for eligibility. The second reform, enacted in 2001, affected the ability of DI recipients to earn labor income while continuing to receive DI benefits. Pre-reform, DI recipients were not allowed to have any labor earnings, but post-reform, they could earn up to 3,800 CAD per year (the “earnings disregard”) without jeopardizing benefits.

Focusing first on the benefit generosity reform, the authors find that by five years after the reform, the DI recipiency rate increased by 0.83 percentage points in the rest of Canada relative to Quebec, a 50 percent increase relative to the pre-reform DI recipiency rate in the rest of Canada. The reform also increased nonemployment significantly – by 1.5 percentage points, an effect about twice as large as the effect on DI receipt. The larger nonemployment effect could reflect that individuals must not be working in order to apply for DI and some who are unsuccessful in their DI application may face difficulty transitioning back to work.

The authors show that the effect of the reform on DI receipt is driven entirely by more people entering DI, not by a change in how long people stay on DI. The response to the reform is stronger for lower-income and older individuals. The authors estimate that a one-dollar increase in DI benefits costs 1.67 dollars because of the induced entry onto the DI program.

Turning to the second reform, the authors find that the introduction of the earnings disregard induces DI recipients to work more, as is evident from an increase in earnings below the threshold and earnings bunching near this amount. In examining the mechanism, the authors find that the reform encouraged some existing DI recipients to start working, generated a small amount of new entry into DI, and led to a small but statistically insignificant amount of exit from DI.

Overall, the authors conclude that higher DI benefits induce significant entry into DI and lead to a decrease in employment. While DI recipients respond to the labor supply incentives of the earnings disregard, the magnitude of the effect is small, indicating that “relaxed earnings restrictions for DI recipients are unlikely to reduce program costs.”