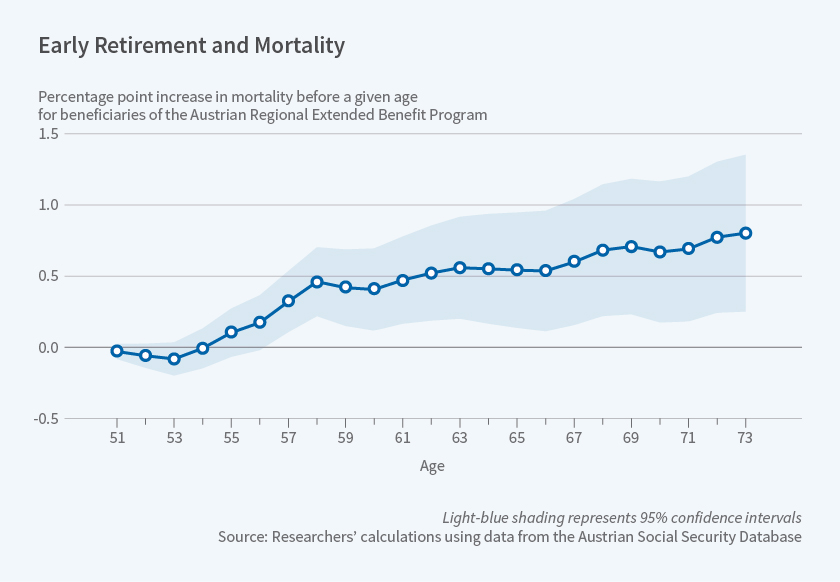 For blue-collar male workers in Austria, an extra year of early retirement, induced by a policy change, was associated with an increase in the probability of death before age 73 of 1.85 percentage points.

Many workers dream of retiring as early as possible to pursue travel, leisure, sport, and other pursuits. But the research findings in Fatal Attraction? Extended Unemployment Benefits, Labor Force Exits, and Mortality (NBER Working Paper 25124), a study by Andreas Kuhn, Stefan Staubli, Jean-Philippe Wuellrich, and Josef Zweimüller, suggest that some individuals, particularly men, might want to postpone retirement if possible. Studying a temporary change in unemployment insurance rules in Austria which allowed workers to retire early, they find that men who retired before the normal retirement age experienced an increased risk of premature death. They do not find any statistically significant effect of early retirement on women.

Many nations are grappling with aging populations and the strains that pension and medical-care obligations place on government budgets. Some are considering changes to retirement programs, such as raising the age of eligibility or reducing benefits. The effect of such changes on the health and well-being of the elderly is a subject of ongoing debate.

To shed light on this question, the researchers analyze a unique public program in Austria in the late 1980s and early 1990s that was adopted when that nation's steel sector underwent dramatic downsizing. The shock affected tens of thousands of workers and their family members, and to cushion the economic blow to older workers, the Austrian government implemented the Regional Extended Benefits Program (REBP). This program effectively allowed workers to take early retirement via disability insurance or old-age pension programs. The program was only available in some regions of the country.

Using information from the Austrian Social Security Database, the researchers were able to compare the employment histories, incomes, gender, age, retirement dates, and age at death of those who took early retirement and those who were eligible but did not. They ultimately compiled information on 310,440 men and 144,532 women — excluding those from the steel sector — and compared data from REBP — eligible regions and nearby non-REBP regions.

The program induced a significant increase in early retirement. When the researchers examined the mortality rates of those who took early retirement, they found that an additional year in early retirement increased a man's probability of death before age 73 by 1.85 percentage points — equivalent to a relative increase of 6.8 percent — and reduced the age at death by 0.2 years. For women, early retirement was not associated with elevated mortality, a finding that is in line with previous research by others.