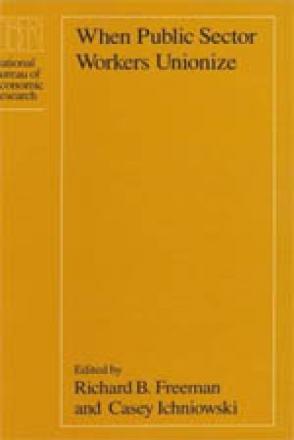 In the 1980s, public sector unionism has become the most vibrant component of the American labor movement. What does this new "look" of organized labor mean for the economy? Do labor-management relations in the public sector mirror patterns in the private, or do they introduce a novel paradigm onto the labor scene? What can the private sector learn from the success of collective bargaining in the public?
Contributors to When Public Sector Workers Unionize—which was developed from the NBER’s program on labor studies—examine these and other questions using newly collected data on public sector labor laws, labor relations practices of state and local governments, and labor market outcomes. Topics considered include the role, effect, and evolution of public sector labor law and the effects that public sector bargaining has on both wage and nonwage issues.
Several themes emerge from the studies in this volume. Most important, public sector labor law has a strong and pervasive effect on bargaining and on wage and employment outcomes in public sector labor markets. Also, public sector unionism affects the economy in ways that are different from, and in many cases opposite to, the ways private sector unionism does, appearing to stimulate rather than reduce employment, reducing rather than increasing layoff rates, and developing innovate ways to settle labor disputes such as compulsory interest arbitration instead of strikes and lockouts found in the private sector.