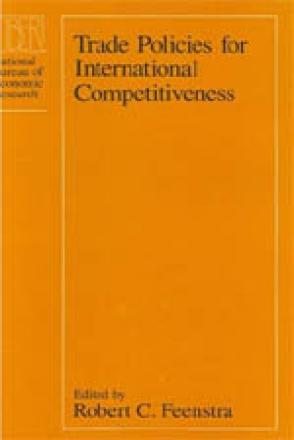 Once unquestionably the world’s leading economic and industrial power, the United States now views with growing dismay the impressive industrial efficiency, vigorous work ethics, and large American holdings of various other nations. Is the United States truly lagging in its ability to compete effectively in world markets? Concern over this question has been voiced in both the business and government sectors, as well as by academic economists. A recent conference, sponsored by the National Bureau of Economic Research, explored the effects of trade policies on a nation’s ability to compete in international markets.
In Trade Policies for International Competitiveness, Robert C. Feenstra collects seven papers from the conference, each accompanied by discussants’ comments, and adds a helpful introduction. Some of the issues considered by contributors are effects of macroeconomic and strategic foreign policies on competitiveness; the recent influx of foreign direct investment in the United States, primarily from Japan; the extent to which Japanese trade patterns are a reflection of underlying factor and endowments rather than trade barriers; and the market structure of Canadian industries, including applications for ongoing US-Canadian free trade negotiations. Topical and provocative, these papers will be of value to economists, policymakers, and those in the business world.