Productivity Growth in Japan and the United States 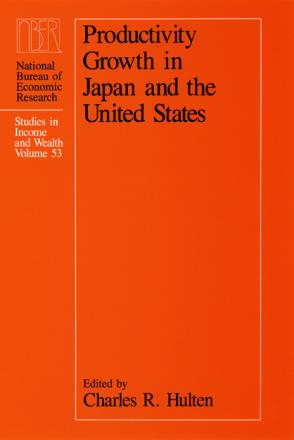 Emerging from the ruins of the Second World War, the Japanese economy has grown at double-digit rate throughout much of the 1950s and 1960s, and, when the oil crisis of the 1970s slowed growth throughout the industrialized world, Japanese growth throughout the industrialized world, Japanese growth rates remained relatively strong. There have been many attempts by scholars from a wide range of disciplines to explain this remarkable history, but for economists interested in the quantitative analysis of economic growth and the principal question addressed is how Japan was able to grow so rapidly.
The contributors focus their efforts on the accurate measurement and comparison of Japanese and U.S. economic growth. Assuming that any sustained increase in real GNP must be due either to an increase in the quantity of capital and labor used in production or to the more efficient use of these inputs, the authors analyze the individual contributions of various factors and their importance in the process of output growth.
These essays extend the methodology of growth analysis and offer many insights into the factors leading to the superior performance of the Japanese economy. They demonstrate that growth is a complex process and no single factor can explain the Japanese "miracle."