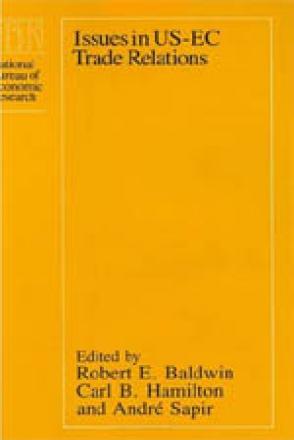 A viable system of international trade requires the active support of both the United States and the European Community, the world’s largest trading partners and, consequently, the primary forces shaping the post-World War II international trading regime. In recent years, however, a series of disagreements have threatened the consensus supporting that regime. Differences have arisen over the relation of trade policy to balance-of-trade deficits, the terms of and actual compliance with the current General Agreement on Tariffs and Trade, and the proper agenda and procedures to be adopted in future multilateral trade negotiations. These differences, if left unresolved, will further weaken an already strained system.
Issues in US-EC Trade Relations presents the results of a conference organized by the NBER and the Centre for European Policy Studies. In it, North American and European trade specialists offer theoretical, empirical, and historical analyses of some of the major issues on which American and Community officials disagree and also formulate realistic policies for settling present disputes. Contributors consider such topics as the legal aspects of trade between the two regions, agricultural policy, different ways the United States and members of the European Community use embargoes to attempt to induce foreign countries to change particular political actions, the growing trend toward protectionism and responses to this policy, international trade in services, and trade policy in oligopolistic environments. In most cases, each general subject is approached from both an American and a European perspective.