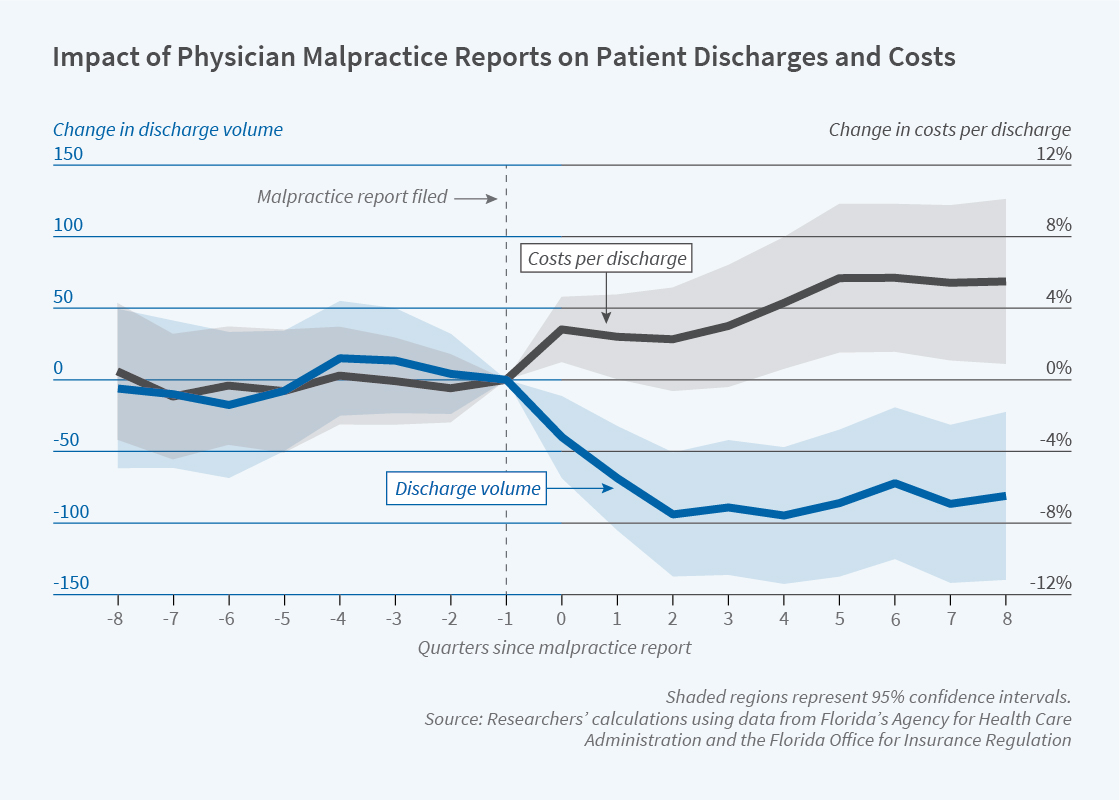 When physicians are accused of malpractice, how does this experience affect their practice of medicine? Researchers Caitlin Carroll, David M. Cutler and Anupam Jena use administrative data on all emergency medicine physicians in Florida to answer this question in How Do Physicians Respond to Malpractice Allegations? Evidence from Florida Emergency Departments (NBER Working Paper 28330).

During the 2005 to 2013 study period, 25 percent of emergency medicine physicians in Florida faced at least one allegation of malpractice. The researchers test whether these physicians changed their practice patterns after the malpractice claim, compared to a control group of similar physicians who did not experience a claim during the sample period. They assume that the precise timing of a malpractice report — which typically occurs more than a year after the alleged injury — is random.

The figure shows a discrete and persistent decline in the number of patients treated by physicians immediately after a malpractice allegation. The researchers estimate that affected providers oversaw about 75 fewer discharges per quarter, a 9 percent decline.  Accused physicians were no more likely to retire from practice than other physicians, so the decline in discharges reflects reduced hours of work or a lower volume of patients during a typical shift.  The case mix of patients was unaffected, with no evidence that the physicians avoided treating patients with complicated, higher-risk conditions.

The figure also shows a discontinuous increase in the intensity of treatment for patients treated by affected physicians. They incurred 4 percent higher costs per discharge, with the additional costs concentrated in laboratory testing.

Increased treatment intensity could be beneficial, if it reflected lessons learned from the allegation of negligence. However, the evidence does not appear consistent with this interpretation. The increased costs occurred consistently for all types of patients, not just those who were clinically similar to the plaintiffs. In addition, physician responses to allegations that were resolved without any payment were the same as responses to allegations that led to large settlements. These patterns indicate a generalized impact of malpractice pressure on clinical decision-making, as opposed to targeted adjustments to the quality of care.

On the other hand, the increased treatment intensity could reflect “defensive medicine”: medical care that is provided to avoid malpractice lawsuits, not for expected medical benefits. The researchers argue that, while their findings are consistent with defensive medicine, they do not constitute definitive evidence of it. Because they are not able to observe the health consequences of the induced medical care, they cannot rule out the possibility of net benefits to patients.

Whether or not the changes in treatment are considered defensive medicine, they indicate that a physician’s personal experience with malpractice claims can influence overall health care costs. The net effect of the estimated changes in practice patterns — including both the increased treatment intensity for patients treated by accused physicians and the reallocation of some patients to treatment by other physicians — was a 1 percent rise in overall emergency department spending.