The Role of Economics in Research on Alzheimer’s Disease 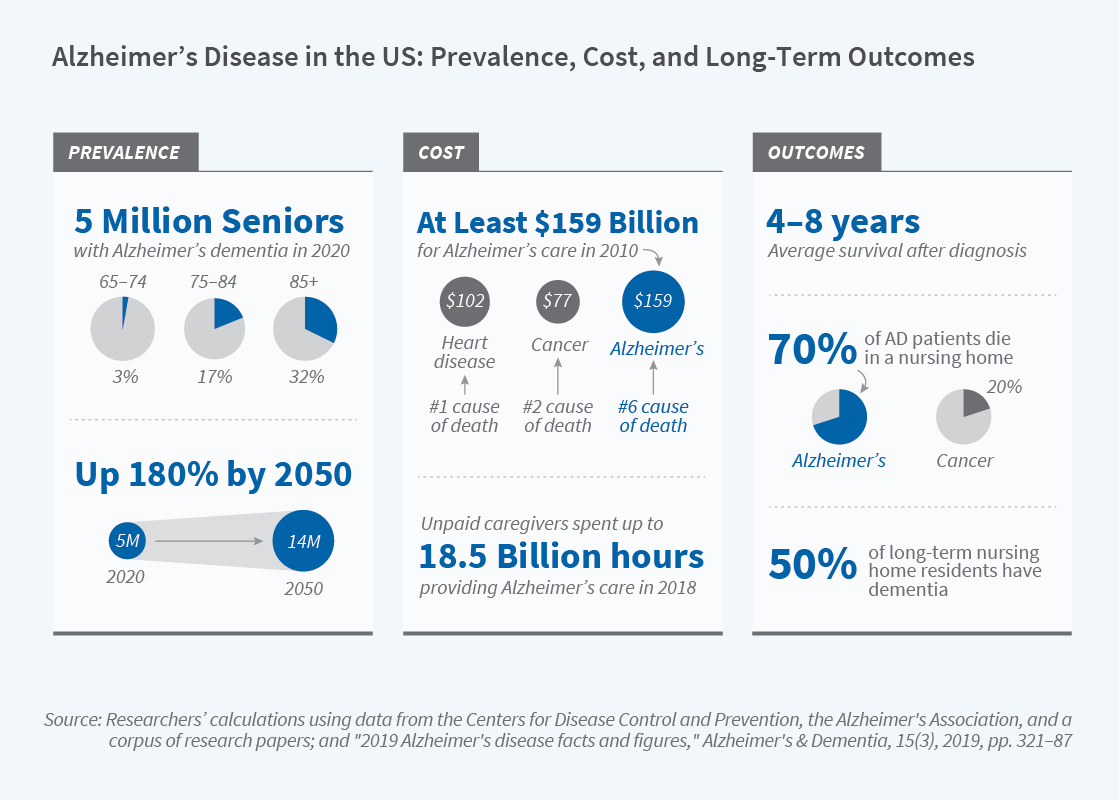 Alzheimer’s disease is a progressive disease of the brain that is the leading cause of dementia in the United States, afflicting an estimated five million Americans. As shown in the figure, the prevalence, costs, and human toll of this disease are vast, and expected to increase over time. Given these sobering statistics, Alzheimer’s disease is a critical priority for research and public policy in the United States.

In order to encourage new economic research on this topic, Amitabh Chandra, Courtney Coile and Corina Mommaerts outline the economics of Alzheimer’s disease in What Can Economics Say About Alzheimer’s Disease? (NBER Working Paper 27760). They provide scientific background, review progress that has already been made, and highlight an array of opportunities for economists, across many fields, to address important questions that are raised by the disease.

A defining feature of Alzheimer’s disease is cognitive decline. The researchers suggest that existing economic models—and findings based on those models—may not apply to decision making by patients who are cognitively impaired. For example, if Alzheimer’s patients are less able to distinguish between high-value and low-value medical care than other patients, then the disease may compromise health care decisions. Similarly, Alzheimer’s disease may put patients at greater risk of financial mistakes and exploitation, suggesting potential value from additional financial regulations to protect them. More generally, the researchers point to a need for theoretical research on decision-making by Alzheimer’s patients, empirical research on these decisions in a wide range of settings, and evaluation of efforts, such as government regulation, to mitigate concerns about decision-making by cognitively impaired individuals.

The costs of care for Alzheimer’s patients are very high and expected to grow over time. Much of the cost is borne by the government, through the Medicare and Medicaid programs, but there are substantial uninsured costs for long-term care and unmeasured costs associated with informal caregiving. Economic research can contribute to our understanding of how the incentive structures embedded in the complex network of payers affect patient care and treatment costs over the course of the disease. It could also address questions about alternative financing models. For example, is it feasible to expand the private long-term care insurance market and, importantly, how might advances in Alzheimer’s diagnostic testing affect this market? Many European countries finance long-term care via social insurance programs and the researchers suggest that these programs could provide informative case studies. The provision of care to Alzheimer’s patients in the United States is also fragmented, with care provided in a range of settings—such as hospitals, long-term care facilities, and the home—that each carry different costs and benefits. Economic research could assess the relative merits of these different settings for care.

The risk of developing Alzheimer’s disease in the future can affect important economic decisions that span a lifetime, including labor supply, savings behavior, insurance purchases, and asset decumulation. The high uninsured costs of care associated with an Alzheimer’s diagnosis may help explain some well-known patterns in the data, such as heterogeneous retirement savings by otherwise similar households, low overall rates of annuitization, and the slow spending of assets during early years of retirement. The researchers suggest that it may be fruitful to explicitly incorporate the risk of developing Alzheimer’s disease into models of economic decision-making over the life cycle.

Economics can also inform efforts to prevent and treat Alzheimer’s disease. For instance, there are known behavioral risk factors for the development of the disease, such as poor sleep, smoking and a lack of exercise. However, the reasons for the correlations between these factors and the development of the disease are not well understood. Economists have useful statistical tools for distinguishing between causal factors — which could suggest low-cost preventive measures — and mere correlations. In addition, Alzheimer’s disease has disparate impacts on women as well as on Black and Hispanic people. Identification of the forces that generate these disparities would be a valuable contribution to our understanding of this disease.

While currently-available pharmaceuticals have limited effects on the progression and symptoms of Alzheimer’s disease, future pharmaceutical innovations have the potential to delay the onset or reverse the course of Alzheimer’s disease. However, standard concerns about incentives for drug development are especially salient in the context of Alzheimer’s disease. Drug development is unusually costly for numerous reasons, including the ongoing ambiguity about the basic science underlying the disease and the long time period that is necessary to observe results in clinical trials. In addition, the fragmented system of payers who bear the costs of the disease is likely to discourage innovation. Economics is well-suited to analyzing approaches to improving incentives for innovation in this area.

In addition to outlining a wide range of economic research questions related to Alzheimer’s disease, the researchers highlight the need for investment in data resources to facilitate this work. To use existing data sources, researchers must choose between richness of data and sample size. New data sources that don't require such a trade-off would be beneficial for future research.

What Can Economics Say About Alzheimer's Disease?