The Persistent Mortality Advantage of a College Degree 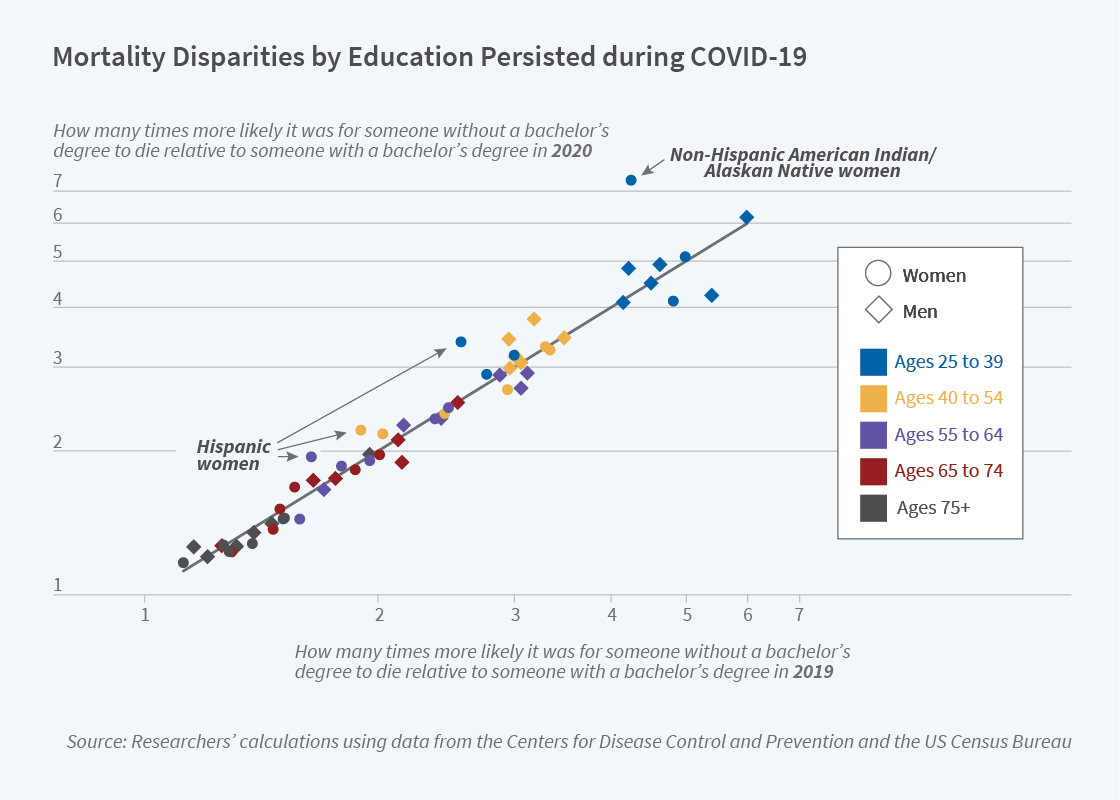 In 2019, Americans with a four-year college degree had six years greater life expectancy at age 25 than those without a degree. These educational differences in mortality have been growing in recent decades and are apparent across demographic groups. In Mortality Rates by College Degree before and during COVID-19 (NBER Working Paper 29328), Anne Case and Angus Deaton explore the evolution of these differences during the pandemic.

If every American faced an equal threat of infection and death from COVID-19, then the mortality gap between more and less educated individuals would have narrowed during the pandemic. However, the risks from COVID-19 were plausibly greater for those without a college degree for a variety of reasons. For example, people without college degrees disproportionately work in occupations where working from home to avoid infection is not feasible. They are more likely to use public transportation and to live in crowded housing arrangements, heightening their risk of exposure. Conditional on infection, less educated individuals may experience worse outcomes due to higher average rates of pre-existing conditions and poorer access to health care.

Using provisional mortality data from the National Center for Health Statistics, the researchers determine that a college degree was protective against mortality during the calendar year 2020, which encompassed the first nine months of the pandemic. They express the mortality advantage of a college degree using the ratio of the mortality rate for those without a four-year college degree to the rate for those with a degree. The researchers calculate these ratios for 60 different demographic groups, identified by two genders, five age groups, and six racial/ethnic categories (Hispanic, non-Hispanic White, non-Hispanic Black, Asian, American Indian/Alaskan Native, and those who report two or more races).

The overall finding that those without college degrees were at greater risk of death during the pandemic may not seem surprising, given their differential risks of infection, higher rates of pre-existing conditions, and worse access to care. A more unexpected finding is that these differences in mortality risk, as reflected in the mortality ratio, were very similar to the differences in mortality risk in the year prior to the pandemic. The figure, which plots the ratios for each demographic group in 2019 and in 2020, shows that the mortality advantage of a college degree was little changed during the pandemic relative to the prior year.

The figure highlights a few exceptions to this pattern. For Hispanic women aged 25 to 64 and for non-Hispanic American Indian/Alaskan Native women aged 25 to 39, the mortality advantage of a college degree was substantially higher in 2020 than in 2019. But for most demographic groups, the mortality ratios during the pandemic were strikingly similar to those before the pandemic. In fact, for over half of the demographic groups, the ratio was slightly lower in 2020 than in 2019.

The researchers acknowledge funding from the National Institute on Aging through grants R01AG053396 and R01AG060104 through the NBER.

Mortality Rates by College Degree Before and During COVID-19