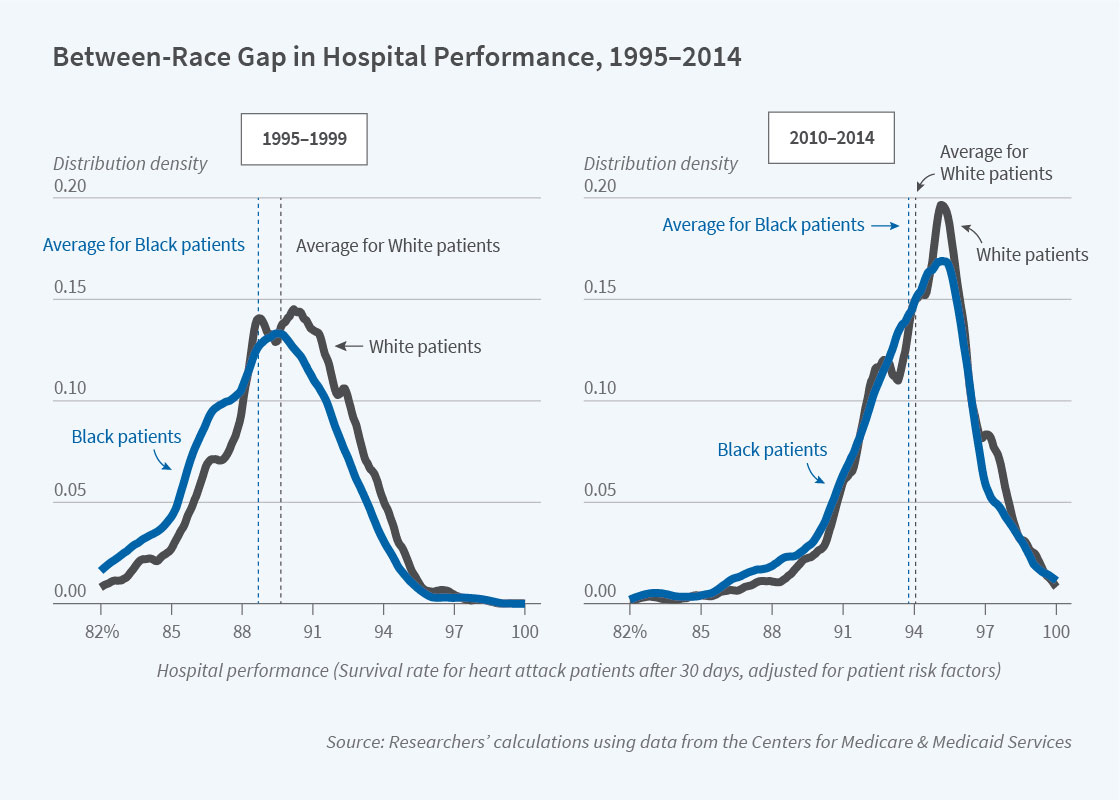 Black Americans experience 20 percent higher mortality rates, after adjusting for age, than White Americans. One potential contributor to this disparity is the tendency for Black and White patients to receive treatment from health care providers with differing levels of performance.

In Hospital Allocation and Racial Disparities in Health Care (NBER Working Paper 28018), researchers Amitabh Chandra, Pragya Kakani, and Adam Sacarny examine the sources of these disparities and their changes over time. To do so, they analyze hospitalization records for Black and White Medicare beneficiaries experiencing a heart attack between 1995 and 2014.

Some differences in hospital performance arise due to where Black and White patients live, affecting their access to high-performing hospitals. In fact, 44 percent of the Black-White disparity in the late 1990s was attributable to differences in the hospital markets where the patients lived. Another 25 percent of the disparity reflected the fact that Black patients lived in different neighborhoods (proxied by ZIP codes) within these hospital markets. The remaining gap was due to differences in hospital choices among patients who lived within the same neighborhood. The research does not address racial disparities in health outcomes within a hospital, focusing exclusively on differences arising from choice of hospital.

To better understand the differential improvement in treating heart attacks at hospitals that tend to treat Black patients, the researchers explore differences across hospitals in the diffusion of new technologies. They conclude that the adoption of low-cost technologies — such as beta-blockers — may have contributed to the differential performance improvements. Hospitals that tended to serve Black patients adopted such technologies more quickly. They show that these patterns were reversed for capital-intensive technologies like cardiac catheterization, suggesting that diffusion of high-cost technologies does not explain narrowing racial disparities in hospital performance.

The researchers conclude that efforts to improve performance at hospitals that serve marginalized racial and ethnic groups can substantially reduce inequities in health outcomes. While changes in hospital choice played a more limited role in reducing disparities in heart attack outcomes in the study, it may be feasible to harness referral patterns and provider networks to reduce disparities in the future. Their work also highlights the potential for technology diffusion as a disparity-reducing (or increasing) force.

The researchers acknowledge support from the National Institute on Aging grants P01-AG005842 (all researchers) and T32-AG000186 (Kakani) and from the Agency for Healthcare Research and Quality grant T32-HS000055 (Kakani).