How Does a Diabetes Diagnosis Affect Patient Outcomes? 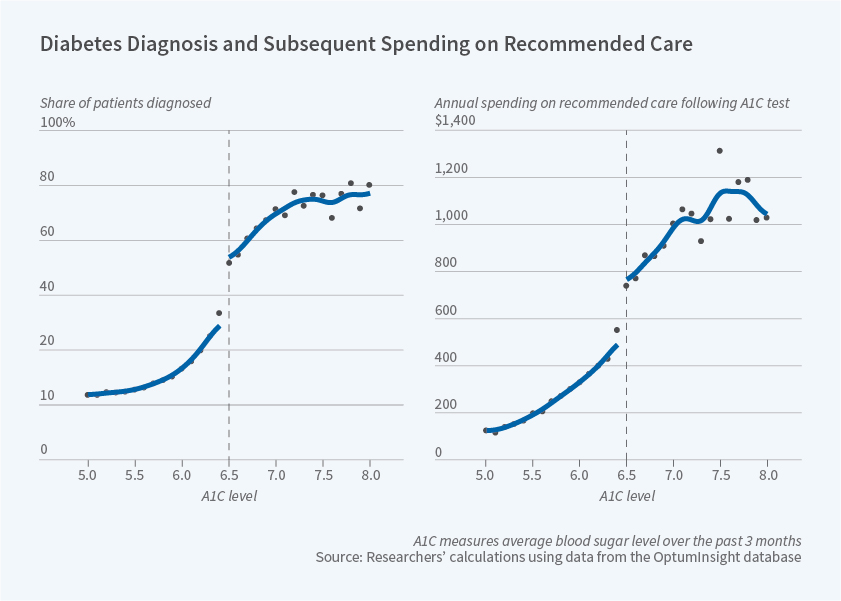 A diagnosis of diabetes is generally accompanied by recommendations for additional medical care as well as lifestyle changes, with the goal of improving patient health. In What Difference Does a Diagnosis Make? Evidence from Marginal Patients (NBER Working Paper 26363), researchers Mattan Alalouf, Sarah Miller and Laura R. Wherry ask whether a diabetes diagnosis, in fact, leads to recommended medical care and improvements in health outcomes for patients at the threshold of being considered diabetic.

Spending on recommended health care for diabetes increases discretely — by about $208, or 57 percent — for patients with an A1C value above the diagnostic standard, relative to patients with slightly lower A1C levels.

Diabetes, which is characterized by the body’s inability to regulate blood sugar, is often diagnosed based on a measure of blood sugar known as glycated hemoglobin (A1C). For the past decade, professional guidelines have suggested a diagnosis of diabetes for patients whose lab tests indicate A1C values at or above a 6.5 percent threshold. Under these guidelines, patients with A1C values just below this threshold are not considered diabetic.

Using claims data from a large health insurance company, the researchers exploit this sharp cutoff point in diagnostic recommendations to determine the effect of a diabetes diagnosis on patterns of health care and health outcomes. Their analysis assumes that, in the absence of this specific diagnostic guideline, outcomes would vary smoothly around the 6.5 percent A1C threshold. Given this research design, their estimates describe effects on patients who are closest to the threshold of being considered non-diabetic. The researchers suggest that the effects on these relatively healthy patients may be particularly relevant when considering any adjustments to the diagnostic threshold.

The researchers analyze 142,541 adult patients who had an initial A1C blood test between 2010 and 2016, but had not previously been diagnosed with diabetes. They are able to observe medical claims for one year prior to the A1C test and up to six years after it.

The first panel of the figure shows that the probability of a diabetes diagnosis within a year of the A1C test increases sharply at the recommended threshold. Some of the patients with A1C levels below 6.5 percent are nevertheless diagnosed with diabetes within the year, potentially reflecting the results of follow-up A1C testing, alternative diagnostic testing, or physician discretion. Similarly, some patients with A1C levels above 6.5 percent do not receive a diabetes diagnosis. In the statistical analysis, the authors estimate an 11 percentage point increase in the likelihood of a diabetes diagnosis at this threshold.

Recommended care for diabetes may include, among other things, continued A1C monitoring, diabetes-controlling medication, screening for complications associated with diabetes, and more aggressive treatment of other conditions such as high blood pressure. As shown in the second panel of the figure, spending on this type of care increases discretely — by about $208, or 57 percent — for patients with an A1C value above the diagnostic standard, relative to patients with slightly lower A1C levels. The researchers calculate that if the entire increase in diabetes-related spending at the threshold is driven by additional care for the patients who were diagnosed as a result of the 6.5 percent guideline, then a diagnosis generates an additional $1,097 in spending for diabetes-related care in the first year. This spending differential persists for the six years following the A1C test.

The researchers also find increased diagnoses of known complications of diabetes — including eye damage, nerve damage and kidney disease — for those with A1C scores above the threshold in the years following the A1C test. These diagnoses are presumably attributable to the additional screening that accompanies a diabetes diagnosis.

Based on their findings, the researchers conclude that "relaxing the diagnosis threshold further, from 6.5 to 6.4, would increase diabetes-related spending by at least $2.4 billion annually and generate only short-lived improvements in patient health over a six-year period." While a diabetes diagnosis generates only limited effects on short-term health status in this study, the researchers note that further improvements may emerge over a longer time horizon, particularly if earlier diagnosis of complications of diabetes improves health outcomes.

What Difference Does a Diagnosis Make? Evidence from Marginal Patients