The Multi-Generational Impacts of Medicaid 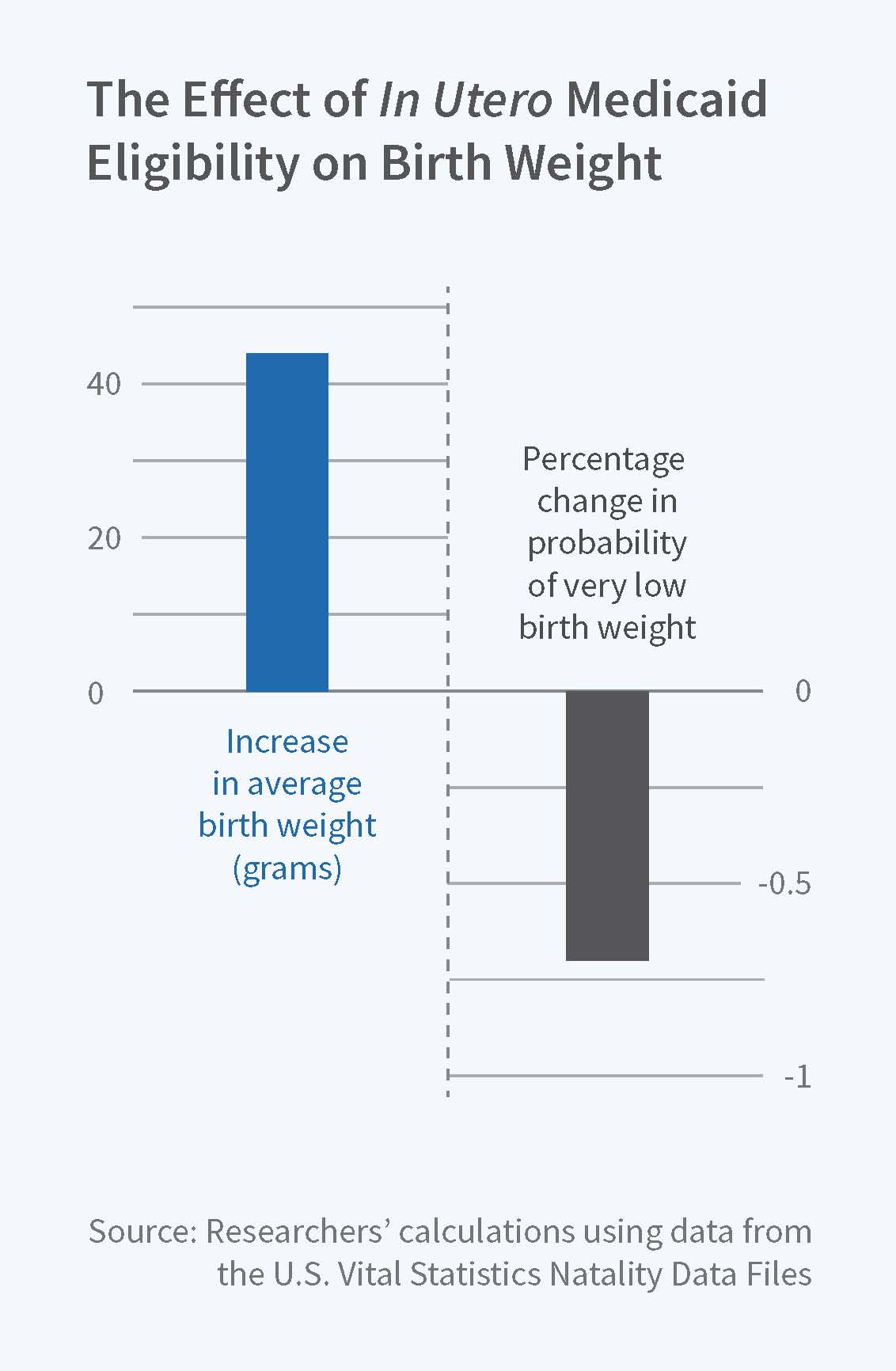 In recent years, increasing attention has been paid to socioeconomic differences in health outcomes and to the role that the early life health environment may play in such differences. The Medicaid program has provided health insurance to many low-income pregnant women and children, particularly since eligibility for the program was expanded in the 1980s and 1990s. Using variation in the timing and extent of expansion across states, past research has established that making women eligible for prenatal Medicaid coverage leads to better adult health and economic outcomes for their babies.

Less well understood, however, are the possible "echo" benefits of Medicaid for the descendants of this generation. Multi-generational effects are plausible, given the known links between maternal health or socioeconomic status and infant health, as well as animal studies that have found that early life environmental impacts can be translated to later generations. Yet while many studies by social scientists document the persistence of health and economic status across multiple generations, there is a dearth of evidence establishing a causal relationship between the early life health environment and the outcomes of future generations.

In Multi-generational Impacts of Childhood Access to the Safety Net: Early Life Exposure to Medicaid and the Next Generation's Health (NBER Working Paper No. 23810), researchers Chloe East, Sarah Miller, Marianne Page, and Laura Wherry step into this void by examining Medicaid's impacts on the second generation's birth outcomes.

The researchers use data from a restricted access version of the 1994–2015 Vital Statistics Natality files that contains information on the mother's state and date of birth. Following the past literature, they exploit the staggered nature of Medicaid expansions in the 1980s, which made pregnant women in certain states and years more likely to be eligible for Medicaid than similar women in other states and years.

The researchers focus on the children of mothers who were born between 1979 and 1986, when the most dramatic increases in prenatal Medicaid coverage occurred. They look at birth outcomes for the second generation including birth weight and gestational length, which are known to be affected by aspects of maternal health (such as high blood pressure and metabolic syndrome) that improve with early life access to Medicaid. These birth outcomes are also predictive of later life health and economic outcomes.

Turning to the results, the researchers find that mothers' own in utero Medicaid eligibility has a substantial, positive impact on their children's health at birth. Increasing the share of mothers with in utero coverage from zero to one is associated with a 44-gram increase in the second generation's average birth weight and a 0.7 percentage point decrease in the incidence of very low birth weight (less than 1500 grams). In utero Medicaid eligibility also reduces the probability that a second generation baby is born under 28 weeks of gestation; interestingly, there is no change in the probability the baby is small for its gestational age. Taken as a whole, the results suggest that the improvements in infant health are generated by underlying health processes that increase gestational length. By contrast, later childhood exposure to Medicaid does not lead to persistent health effects across generations.

Exploring the possible mechanisms for these effects, the researchers note that Medicaid access could affect the fertility patterns of women exposed to the program while in utero, changing the composition of women who choose to give birth or the timing of births in a way that affects health. They find that these changes explain at most 6 to 17 percent of the overall changes in second-generation infant health. The researchers also use estimates from existing research regarding the effect of Medicaid access on earnings to project how much of the second-generation's health gains might result from Medicaid-induced increases in the first generation's income. Although the estimates are imprecise, the researchers conclude that income likely plays an important role in the transmission process.

In concluding, the researchers note "generational persistence in the impacts of early life environments suggest that historical differences in fetal health conditions between advantaged and disadvantaged groups may undermine contemporaneous efforts to close health and economic gaps. At the same time, our results indicate that early life health investments have payoffs that extend well beyond those that social policy makers usually consider. Investigating a more complete range of program benefits to later generations is an important goal of future work, and is critical in light of increasing debates about the efficacy of the U.S. safety net."

This project was supported by funding from the National Science Foundation (Grant #1327768), the University of California Davis Interdisciplinary Frontiers in the Humanities and Arts Grant, and the U.S. Department of Health and Human Services. Wherry also benefited from facilities which receive core support (R24-HD041022) from the Eunice Kennedy Shriver National Institute of Child Health and Human Development.

Multi-generational Impacts of Childhood Access to the Safety Net: Early Life Exposure to Medicaid and the Next Generation’s Health