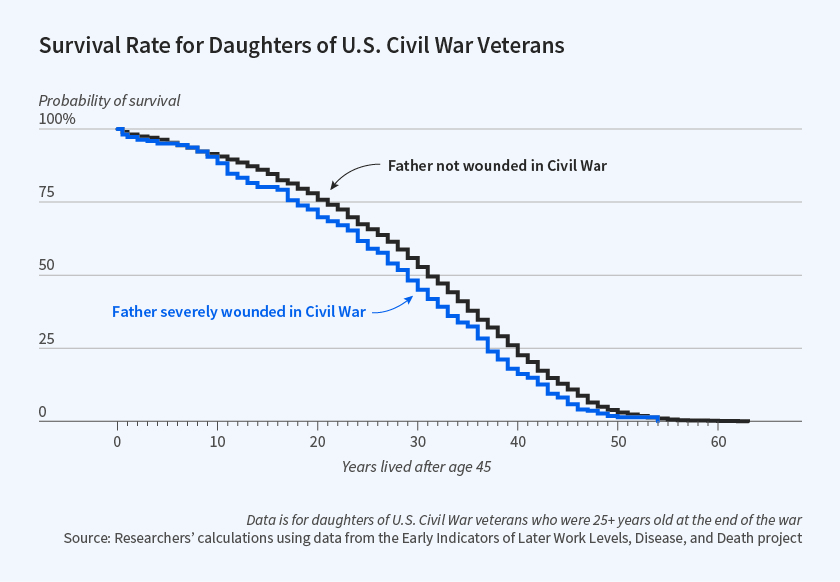 For severely wounded veterans and their families, injuries sustained during the Civil War continued to take their toll for decades after the fighting ended. Hit hardest were older wounded veterans and their daughters. These veterans experienced greater economic adversity, including lower occupational status and reduced wealth in subsequent decades. Their daughters also experienced lower socioeconomic status and on average died younger than women whose fathers survived the war physically unharmed.

In The Impact of a Wartime Health Shock on the Postwar Socioeconomic Status and Mortality of Union Army Veterans and their Children (NBER Working Paper 25480), Dora Costa, Noelle Yetter and Heather DeSomer highlight the long-term and inter-generational ramifications of disability in an economy dominated by physical exertion.

They draw on a representative sample of nearly 40,000 veterans of the Union Army, focusing on a novel dataset of 7,810 white non-POWs who were linked to their children’s records. One in four of these veterans was wounded during the war.

Compared with their uninjured counterparts, wounded soldiers who wed after the war married women whose fathers had about 20 percent less property wealth. While wounded veterans were only slightly less likely to become fathers than their contemporaries who had no war-related injuries, those who did have children averaged 8 percent fewer children.

Farming was the most common occupation of the era, with labor a distant second. As of 1880, 61 percent of wounded farmers had returned to the land, compared with 65 percent of non-wounded farmers. Among those who did not return to farming, wounded veterans were more likely to become laborers (24 percent) than nonwounded (21 percent) — a step down in economic status. These occupational transitions were most common among younger veterans.

When assessing how wounds affected wealth, the researchers split the veterans into two groups: those who were under age 30 when they enlisted and those who were 30 and older. As of 1870, the median wealth holdings of younger veterans who had been wounded were 24 percent less than those of their uninjured counterparts; for older wounded veterans, the gap was even greater, 35 percent. The researchers suggest that the impact on wealth was lower for the younger group because they were in a better position to make a fresh start in a more suitable occupation than their older comrades.

The researchers also classified the injured veterans into two groups: severely wounded and all others. Severe wounds were those that led to a disability discharge or to amputation or blindness. The daughters of the severely wounded were less likely to marry farmers — who had higher socioeconomic status — and more likely to marry laborers. By contrast, the occupational prospects of sons were not affected to a statistically significant degree by their fathers’ wounds.

Daughters of the severely wounded fared less well in both health and wealth if their fathers were over the age of 25 at the end of the war. Although wounds did not affect veterans’ own mortality, they did affect longevity for their daughters. After turning 45, the daughters were 1.3 times more likely to die at any given age than were the children of younger, unafflicted fathers. Based on other studies of health shocks, the researchers speculate that daughters were more vulnerable to in-utero nutritional deficiencies and — because they likely spent more time indoors doing chores than their brothers — to the infectious diseases that swept crowded living quarters.

The researchers acknowledge funding from NIH grant P01 AG10120 and the use of facilities and resources at the California Center for Population Research, UCLA, which is supported in part by NICDH grant P2C HD041022.