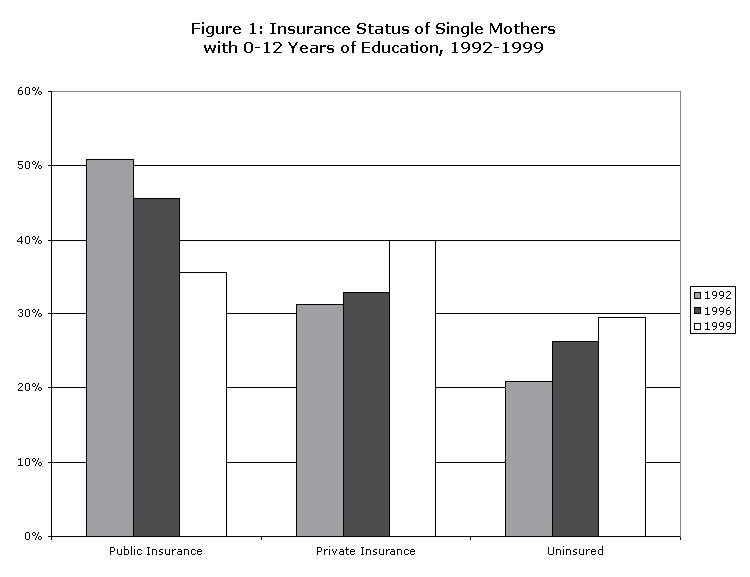 The Personal Responsibility and Work Opportunity Reconciliation Act (PRWORA) of 1996 enacted sweeping changes in the welfare program, including work requirements and lifetime limits on participation. As a result of PRWORA and earlier state reform efforts, as well as other factors such as a concurrent economic boom, the number of welfare recipients fell by 62 percent between 1993 and 2001, from 14.1 million to 5.4 million.

One potential unintended consequence of welfare reform may have been to increase the number of low-income families without health insurance. Under the old system, families on welfare were automatically enrolled in Medicaid, a government health insurance program for poor women and children. After welfare reform, women transitioning from welfare to work may have taken jobs that did not offer private health insurance benefits. While many of these families remained eligible for Medicaid, at least on a transitional basis, they would now have to go through a separate, unfamiliar application process to enroll.

In fact, there were striking changes in the health insurance status of low-educated single mothers during the 1990s, as illustrated in Figure 1 - many women moved off of public health insurance programs, some gaining private health insurance benefits and others becoming uninsured. In Welfare Reform and Health Insurance Coverage of Low-Income Families (NBER Working Paper 10033), Robert Kaestner and Neeraj Kaushal explore the extent to which these changes were the direct result of welfare reform.

In their analysis, the authors make use of the fact that the welfare caseload varied dramatically during the 1990s and that reductions in the caseload occurred at different times in different states, as some states enacted earlier welfare reforms. Using data from the Current Population Survey for the 1992-1999 period, the authors estimate whether living in a state with a higher welfare caseload in a given year was associated with low-educated single mothers in that state being more or less likely to have public insurance, have private insurance, or be uninsured. The authors use married mothers and single women without children, two groups largely ineligible for welfare, as control groups to assess whether observed differences in insurance status are the result of differences in caseload rather than other state-specific factors.

Interestingly, these findings suggest a substantially smaller increase in the number of uninsured single mothers as a result of welfare reform than is suggested by "leaver" studies that follow women as they leave welfare. The authors suggest that the discrepancy may be due to the fact that leaver studies cannot measure the effect of welfare reform on women who are now deterred from entering the welfare system.

Robert Kaestner and co-author Elizabeth Tarlow extend this work to study the effects of welfare reform on health in "Changes in the Welfare Caseload and the Health of Low-Educated Mothers," (NBER Working Paper 10034). The authors suggest that welfare reform may affect health behaviors and health status in several ways - by encouraging women to switch from unpaid household work to paid employment, by encouraging strategies to avoid public assistance such as cohabitation with a partner or family member, and by affecting access to health care.

Using the same empirical strategy and data from the Behavioral Risk Factor Surveillance System, the authors find that welfare reform had little effect on health, but was associated with decreases in binge drinking and increases in exercise. Notably, these lifestyle improvements do not appear to be the result of employment, as they are experienced equally by those who left welfare for work and those who did not. While the authors suggest that further research would be helpful to understand the mechanisms for these lifestyle improvements, they conclude that welfare reform did not adversely affect the health of low-educated, single mothers.