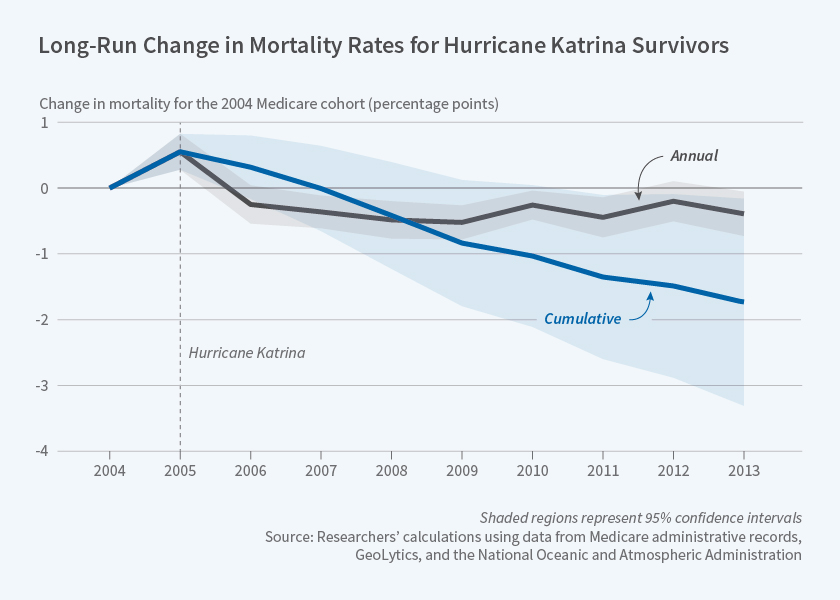 Hurricane Katrina was the costliest storm of its type to ever strike the U.S. mainland. The 2005 storm killed nearly 2,000 individuals and displaced more than one million residents, resulting in the largest migration of U.S. residents since the 1930s Dust Bowl.

While the immediate death toll of the storm is well known, the long-term effects of the storm and resulting displacement on health and longevity are less well understood. Former New Orleans residents dispersed across the U.S., raising the possibility that local conditions may have affected the health of movers.

In Does When You Die Depend on Where You Live? Evidence from Hurricane Katrina (NBER Working Paper No. 24822), researchers Tatyana Deryugina and David Molitor examine the long-run mortality impacts of Hurricane Katrina on the elderly and disabled population of New Orleans.

This vulnerable population was deeply impacted by the hurricane — over one half of those killed by the immediate impact of the storm were over age 75, and elderly Medicare beneficiaries made up one-fifth of the displaced population. While the storm and subsequent displacement may have been scarring for this group's health in the short term, moving to areas with better economic and health outcomes may have generated long-term health benefits.

The researchers find that the mortality rate of the New Orleans beneficiaries was 0.5 percentage points higher in 2005 (the year of the storm), representing an increase of over 10 percent. Most of these excess deaths occurred within a week of the hurricane's landfall.

By contrast, Hurricane Katrina led to sustained mortality reductions over the following eight years for those living in New Orleans at the time of the storm. Including the initial storm-related deaths, the hurricane increased the probability of surviving to 2013 by 1.7 percentage points, a nearly 3 percent increase relative to the eight-year survival probability. This result is not explained by healthier beneficiaries being more likely to survive the storm, since the calculation includes storm-related deaths.

To explore the role of place in health, the researchers compare mortality outcomes for elderly beneficiaries who left New Orleans for low-mortality regions versus those who left for high-mortality regions. They find a strong relationship between mortality in the destination region and the movers' mortality — with every one-point increase in the destination mortality rate, there is a 0.8 to 0.9 point increase in the movers' mortality. They estimate that 70 percent of the long-run mortality decline is attributable to the change in local mortality rate experienced by hurricane victims.

Despite a high death toll in the immediate aftermath of the storm, Hurricane Katrina reduced long-run mortality among elderly and disabled Medicare beneficiaries by inducing relocation to lower-mortality regions. This study joins a growing literature highlighting the critical effect of place on health. As the researchers note, "[o]ur finding that a migrant's individual mortality risk corresponds closely to the destination region's mortality rate suggests that local public health conditions are an important determinant of individual health outcomes, at least for the elderly and disabled populations."

The authors acknowledge funding from the National Institute on Aging (grant R21AG050795).

Does When You Die Depend on Where You Live? Evidence from Hurricane Katrina