The Long-Run Effects of Pollution Exposure on Mortality 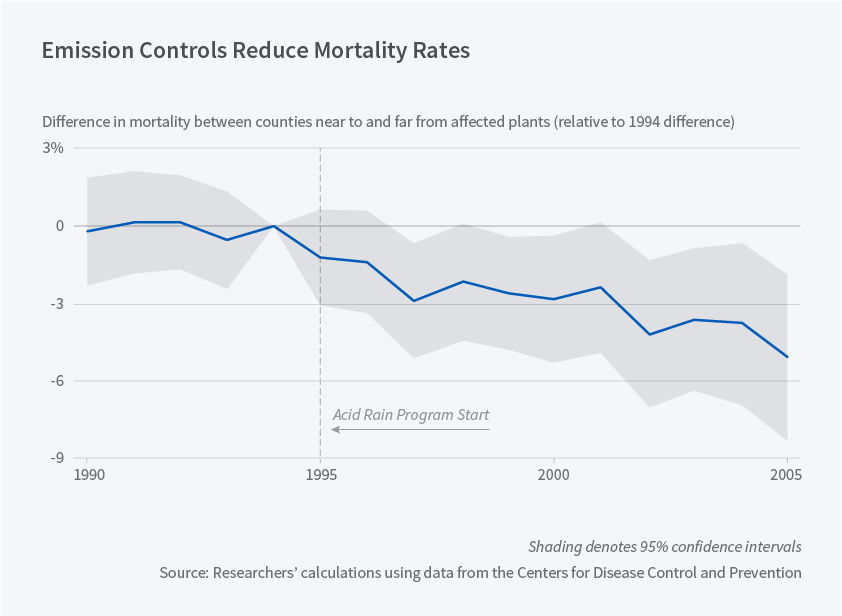 Pollution levels in many parts of the U.S. exceed national air quality standards for several common pollutants including fine particulate matter, ozone, sulfur dioxide, and nitrogen dioxide. While a number of studies have identified the short-term effects of pollution on health using temporary shifts or spikes in exposure, quantifying the effects of long-run exposure to pollution is more challenging because it requires a long-lasting change in ambient pollution levels. Moreover, the fact that people may respond to changes in pollution levels by moving complicates the analysis.

The ARP provides an attractive setting in which to explore this question, as it had an immediate and permanent effect on SO2 levels. SO2 is a pollutant in its own right and also a precursor gas in the formation of particulate matter smaller than 2.5 micrometers (PM2.5), which has much more detrimental effects on health than SO2 itself, particularly on pulmonary and cardiac function. The ARP initially regulated only the 110 most SO2-intensive coal power plants, allowing the researchers to compare changes in mortality over time in counties near regulated plants (treatment counties) to those in counties far from these plants (control counties). As both SO2 and PM2.5 can travel vast distances once airborne, the researchers define "near" as being within a 100-mile radius of a regulated plant. Using such a large treatment area mitigates the risk that people are moving between treatment and control counties as a result of changes in pollution levels.

The analysis focuses on the working-age population, those ages 35-64. Much of the earlier work on the health effects of pollution focused on vulnerable groups such as infants and the elderly, so it is useful to examine the effects of pollution on a part of the population that is in more robust health and where mortality represents a significant loss in productivity and life expectancy. The study covers the period 1990-2005, spanning the five years before and ten years after the implementation of the ARP.

The researchers construct annual county-level mortality rates using mortality data from the Centers for Disease Control and Prevention for all deaths in the U.S., as well as population data from the 1990 U.S. Census. They focus on mortality from internal causes as well as respiratory and cardiovascular mortality, where PM2.5 exposure is expected to be important.

The researchers also find that the introduction of the ARP led to decreases in infant and elderly mortality. These mortality declines translate into an estimated 1,800 fewer infant deaths and 26,000 fewer deaths among those age 65 and above in 2005. The value of the mortality improvements for all age groups is estimated to be $164 billion using a constant value of $4.9 million per statistical life, or $134 billion using age-specific values.

"The Acid Rain Program caused lasting improvements in ambient air quality, with mortality benefits that accrued to adults gradually over time," write the researchers. The finding that reductions in mortality risk continued to grow in the first ten years after the implementation of the ARP suggests that health effects accumulate after a change in sustained exposure to pollution. The researchers note that there are other important health and human capital outcomes potentially affected by improvements in air quality.